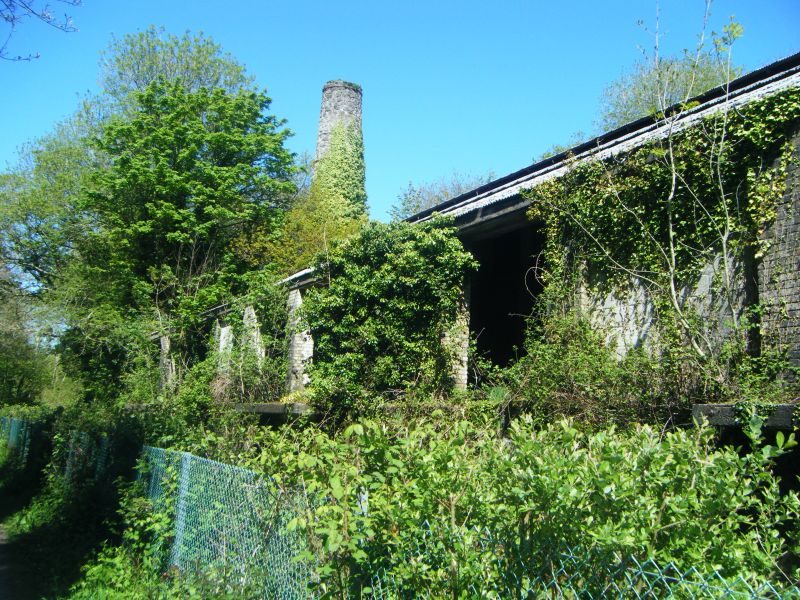 II
China Clay Dry built early C20 by the Stannon China Clay Company.
The three northern china clay dries at Poley's Bridge normally known as Wenford Dries survive as a series of conjoined buildings composed of a variety of building materials including dressed granite, granite rubble, concrete blocks of various sizes and brick. The substantial series of wooden trussed roofs are covered with asbestos sheeting. The buildings are terraced into a west facing slope in the valley formed by the River Camel and form part of a much larger complex of which only these three northernmost dries are listed. To the east of the buildings is a levelled terrace which originally supported the railway tracks used to transport the finished clay from the dries. The dry buildings themselves stand on a further two terraces above the original site of the railway. The lower terrace supports the linhay in which the clay was stored prior to removal to the waiting wagons and upon the upper terrace are three separate pan kilns in which the clay was dried. Beyond the pan kilns and separated from them by the eastern wall of the dries are a series of mainly rubble built settling tanks with concrete floors. The dries are the product of constant evolution in the processes used to dry china clay and consequently there is considerable evidence of alterations and additions to the original reflecting changing technology and refinements in processing. The pan kilns survive very well, although in places the upper kiln floor has been damaged exposing the lower flues. The original sluice openings leading from the settling tanks to the pan kiln have been blocked and some replaced by iron pipes with control valves. Associated with each dry is a separate furnace and cylindrical chimney.
HISTORY: The Wenford Dries were built in the early part of the 20th century (probably post-1907) to serve the china clay pit at Stannon (SX 12508030) on Bodmin Moor some 7.2km to the north east. Liquid china clay was carried in a pipeline from the pit to the settling tanks behind the dries. The dries operated until 2002 apart from a brief closure during the Second World War. The works were originally built by the Stannon China Clay Company, but were acquired by English China Clays in 1919. The choice of site was heavily influenced by the presence of an existing railway line leading from Wenfordbridge which was originally constructed to carry granite from the nearby De Lank quarries. The dry was built adjacent to the railway line and a large private siding was built to connect to the network.
SUMMARY OF IMPORTANCE: This early C20 complex was built to process raw china clay following extraction. Built on a massive scale, this example is unusual in that it consists of a series of conjoined dries. Such buildings are highly unusual, and very much a Cornwall and West Devon speciality. This example is of special interest for its scale, its configuration, its technological interest and its regional importance. The southern part of the building has undergone drastic alteration and is not regarded as of special interest. It is the northern three dries that possess clear importance.