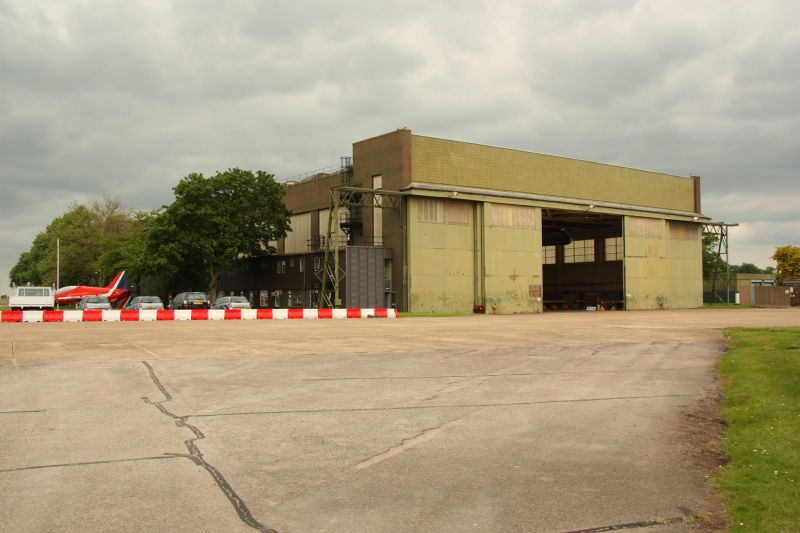 EXTERIOR: The roof a series of transverse ridges with hipped ends, behind a parapet, and with deep apron above doors. The long side walls are in plain concrete with slightly worked surface. At mid height are 10 large 32-pane fixed steel casements separated by concrete piers, and with continuous sill and lintel bands. Above the windows a high parapet to flush coping. One bay at each end, also in concrete, is slightly brought forward in a 'Moderne' manner, and with a higher parapet; a tall single light with horizontal bars is centred to the bay. The end elevations have full height and width steel doors, with 12-pane lights at the top, under a deep projecting concrete rail carrying the rolling headgear; beyond the opening a light steel lattice beam projects out and is carried by a light steel strutted support, with steel ground-stops for the doors. Above the doors, and contained by the wing walls of the first bays, a deep apron with asbestos-cement slate hanging. The doors originally had sand or gravel fill between inner and outer sheeting at the lower panels, to enhance blast protection. Annexes have steel casements.

INTERIOR: Plain concrete floor, steel stanchions exposed internally carry deep lattice trusses in steel channel, double to top and bottom chords, set to the ridges of the transverse roofs and shaped to the hipped ends. At right angles to these are cantilevered members, in steel angle, at 15ft (4.6m) centres, meeting at and carrying the internal gutters. The bays adjoining the doors have horizontal wind-bracing members. The roof slopes are underlined in softwood square-edged boarding. Art Deco style talvstrades to stairs in hangars 2 and 3.

HISTORY: The hangars at Scampton - built to house all the station's aircraft, and examples of the careful design that typified the Air Ministry in the period from 1934-9 - define its function as one of the bomber stations built for the Air Ministry in the period immediately prior to the Second World War, deployed in reaction to the threat from Germany. They are associated with what became Bomber Command's most famous base, and one which continued to evolve as a landscape for the projection of deterrent power against the Soviet Union in the Cold War period. The hangars are numbered 1 to 4, starting from the south, No. 2 Hangar retaining 617 Squadron's offices and having to the front the grave of Guy Gibson's Labrador which was killed on the eve of the Dambusters' Raid.

Until the onset of perimeter dispersal from the late 1930s all the aircraft of an operational airfield - typically an omni-directional flying field of 1000 yards diameter - would be accommodated in its hangars: their construction took up a considerable part of the construction cost for a new site. As a consequence, military planners shadowed aircraft development through the planning and development of hangar buildings, a fact which underpins the importance of this group in the context of British air policy, which since the end of the First World War had been based on the philosophy of offensive deterrence. The C-type shed, which was built to accommodate workshops and squadron offices, was the standard hangar type for the post-1934 Expansion Scheme, originally designed in 1934 and of which 155 examples were built. Its dimensions (300ft long, 150ft span and clear height of 35ft), were intended to accommodate 100-ft span heavy bombers, enabling new specifications to be issued to aircraft manufacturers by the Air Ministry.

Nothing remains of the 3-squadron Training Depot Station which opened in July 1918 and closed in 1919. The site was completely rebuilt under Scheme C of the post-1934 expansion of the RAF, and was opened on the 27th of August, 1936, Heyford and Virginia bombers arriving from Aldergrove in October. It became, during the Second World War, one of the best-known RAF stations. Attacks on German shipping and ports, including minelaying operations and attacks on the Scharnhorst in June/July 1940, was followed by involvement in May 1942 in the first 1000-bomber raids after the introduction of Lancaster bombers two months earlier. The newly-formed 617 squadron, who arrived here in spring 1943 (and were based from No 2 Hangar), achieved worldwide fame under the command of Guy Gibson with their raid on the Ruhr dams in May. Operation Chastise, better known to millions as the Dambusters' Raid, pioneered the long-distance control by squadron commanders of precision operations, converting in the words of one historian (Terraine: 540) Bomber Command's tactics from those of 'a bludgeon into a rapier'. It captured the imagination of the press and public at a critical moment in the war, making national heroes of Guy Gibson and his crews. It provided a huge boost to Bomber Command's morale and enabled Churchill, in Washington with his chiefs of staff for a meeting with Roosevelt, to both silence American critics and boost confidence among the Canadians who were contributing increasing amounts of air crews to Bomber Command. Leonard Cheshire took command of 617 Squadron in October 1943, and spearheaded a series of raids on sites ranging from the rocket site at Peenemunde and the U-boat pens at Le Havre that developed the effectiveness of precision bombing. After the expansion of the airfield and construction of runways in the summer of 1944, Scampton continued to play an important role in the Strategic Bomber Offensive and the daylight raids in support of the Allied offensive in Europe. Scampton's enlargement and remodelling for the V-force bombers and its nuclear weapons (one of 10 Class One V-bomber bases remodelled in the late 1950s) underpinned its continued importance during the Cold War and had a major impact on its landscape. This included the construction of a new main runway (the main WWII SW-NE runway has remained on its original axis), H-shaped dispersal platforms, an avionics maintenance building, a nuclear weapons store and an Operational Readiness Platform, to allow the bombers to be scrambled within a couple of minutes. The two 'T'-type hangars on the airfield, adjacent to the avionics building, were assembled at speed in order to accommodate the servicing facilities of the 'Blue Steel' rocket powered stand-off missile, delivered to the RAF in 1962 and fully operational by 1963. It was deployed to counter improving Soviet air defences which could engage high flying bombers before they reached their target. The facilities at Scampton reflect the urgent need to introduce this weapon and thereby maintain the credibility of the British nuclear deterrent.

The core of parent bomber stations - augmented by wartime satellites - which launched the Strategic Bomber Offensive against Germany were planned from 1923, initially under General Sir Hugh Trenchard, who ranks as the period's most strident advocate of the doctrine of offensive deterrence, and then as war threatened from 1934. A major feature in the Second World War was the construction of airfields with concrete runways for four-engined bombers such as the Lancaster. The heavy bomber was, as Churchill acknowledged, the only means - in the absence of an invasion of northern Europe - to take the war to German soil and divert resources from the Eastern Front. After Sir Arthur Harris's appointment as head of the Bomber Command in February 1942, and especially after the Casablanca conference of January 1943 - which postponed Overlord to the following year - even greater resources were committed by the US and British economies towards the bomber offensive. The bomber offensive was conducted at enormous cost to human life. Sir Arthur Harris's own estimates put Bomber Command's fatalities - out of 125,000 who entered its units during the war - at 50,000. Up to 593,000 German civilians died, the firestorms at Dresden and Hamburg accounting for tens of thousands of deaths as a result of single concerted raids.