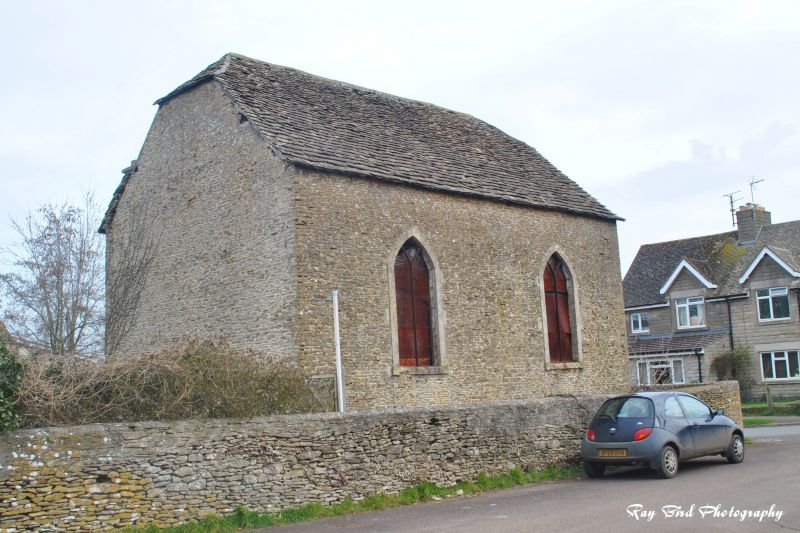 II
A simple Nonconformist chapel dating from c.1821. A small scale, one-roomed chapel of coursed limestone rubble; the roof is half hipped and covered in Cotswold stone slates. The chapel building is rectangular in plan and oriented north-south, with a later single storey vestry (post-1842) attached to the east. The entrance is to the south, with a C19 six panel flush door in a dressed limestone surround with flattened arched top. The entrance porch is of coursed limestone rubble with dressed limestone quoins to the front elevation, and a flat corrugated metal roof. Above the entrance doorway is a single pointed arched window in a dressed limestone surround, divided into two lights by Y-shaped iron tracery. The western elevation has two similar windows, that to the east has only one.

Interior : the chapel has timber tongue and groove panelling to a height of roughly 1 metre around all four sides, rising to c.2 metres in the centre of the northern wall, the probable site of the pulpit, which has been removed. There is a timber gallery to the southern end, raised on two moulded timber columns. The gallery is fronted in timber with raised and fielded panels, and is accessed by a simple straight stair with turned balusters. There may be the remains of a baptismal font for immersion in the floor towards the northern end of the building. The vestry room was heated with a small fireplace (now removed) and the chimney was installed in the depth of the external wall of the chapel building, emerging through the north east corner of the chapel.

Subsidiary features : The chapel plot is bounded by a dry stone wall c.1 metre high, closely enclosing the chapel building and two small areas on the northern and eastern sides which contain headstones marking burials, all dating from the C19.

History: The chapel is recorded as having been erected in 1821 and held in trust for Baptists and Independents. The building is certainly present on the tithe map of 1842 for Hullavington. This is one of three Nonconformist chapels surviving in the village, one dating originally from 1697 but in use as a school from 1818 to 1842; the second was not constructed until 1843, indicating that for a period in the early-mid C19 the present building was the focus for Nonconformism in the community. It fell out of use in 1927 and had subsequently been used as agricultural storage until the time of inspection in 2006.

Summary of importance : Most buildings dating from before 1840 which survive largely intact merit consideration for listing, and this is especially true for places of worship which are often the focus for their communities and reflect their development. The main building of the Baptist Chapel, dating from 1821, is unaltered, and although some of its interior fittings have been removed, its form and function are immediately comprehensible. Whilst it is architecturally simple and unadorned, the building is of good quality and has clear architectural merit, entirely reflecting the tradition of Nonconformist building in the C19.