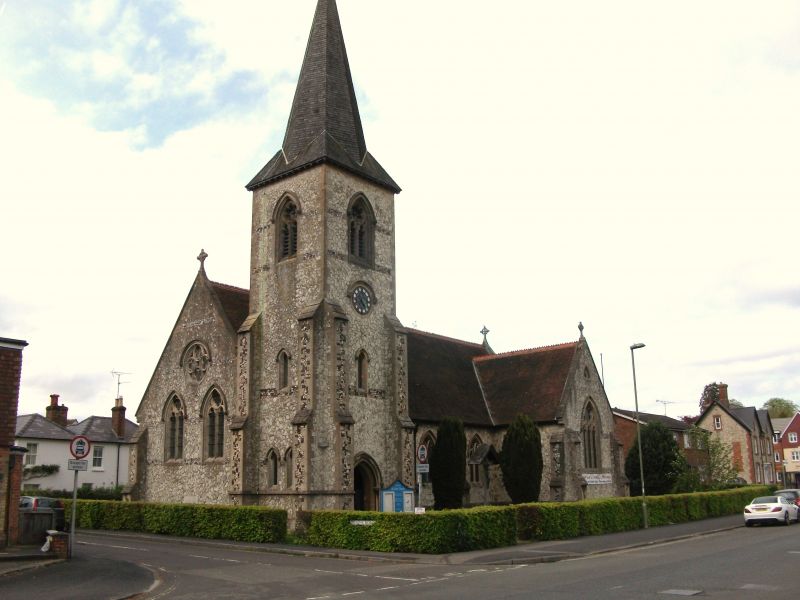 II
Anglican parish church. 1873-4 designed by Frederick Charles Dyer of London in the Early English style. A vestry was added in 1878 and the south west tower and spire added in 1881. Built of polygonal Selborne malmstone with Bathstone ashlar dressings, Steeply pitched clay plain tile roofs with terracotta ridge tiles.
PLAN: Four bay nave with south west tower, north and south transepts, north vestry and apsidal ended chancel.
EXTERIOR: South west tower of three stages with broach spire and angle buttresses with weathered set-offs to lower two stages. Pointed lancets under hood moulds in the two lowest stages and two-light reticulated bar tracery windows under hood moulds to bell chamber in upper stage. Pointed arched doorway in south-east side at second stage under hood mould by "Row and Son" of Alton. The wording over the clock reads "The time is short" - a memorial to Dr L Leslie, the treasurer of the building committee. Angle buttresses with weathered set-offs to nave, transepts and chancel. Windows to nave and chancel are two-light reticulated bar tracery windows under hood moulds. Those to the north eastern end of the chancel (behind the altar) and to the transepts are three-light reticulated bar tracery windows.
INTERIOR: Plastered walls and boarded arch braced roof supported on stone corbels to nave. There are three stained glass windows on the south east side of the nave, two of 1874 and the one nearest the entrance of 1890. Original wooden pews with trefoil design in bench ends. 1874 octagonal Caen stone font at south west end of nave carved by Messrs J Boggust, junior and William Pickett (who worked for J H and E Dyer, builders) in their leisure hours as "their contribution to the church". Hexagonal wooden pulpit with stone base of 1892 was a memorial to William Dyer, secretary to the building committee. Carved stone panel set in the south west gable wall of the nave depicting Christ blessing children was carved by the church sculptor, Harry Hems of Exeter and the oak panelling to the south west gable end of the nave with armorial shields along the top was given by the Wright family of Alton in 1937. Tall pointed moulded chancel arch with columns with moulded capitals and bases. 1894 wrought iron chancel screen on stone base by Hart, Son and Peard, given by Mr and Mrs George Frost in memory of their daughter. The chancel has a roof with moulded ribs, oak dado panelling and four 1874 stained glass windows in memory of Bishop Samuel Wilberforce in whose episcopate the church was commenced. 1892 oak reredos carved by employees of J H and E Dyer as a memorial to William Dyer, secretary to the building committee. 1885 organ on north side of chancel by Hill and Son of London was the gift of Miss Lydia Dyer. Elaborately carved choir stalls. Old Italian chancel lamp given by Mr E J Pilcher in commemoration of his son Ernest James killed in Syria on 2nd August 1917. Ancient Russian icon of Christ on north wall of chancel.
HISTORY: The nave, north and south transepts and chancel were built in 1873/4 at a cost of £3,163 13s raised by public subscription. William Dyer gave the site (valued at £150) and stone from his Selborne quarry for the building of the church. Building works commenced on Easter Monday 1873. The foundation stone was laid on 18th July 1873, by Sir Roundell Palmer (First Earl of Selborne) whilst he was Lord Chancellor. The works were completed and the church dedicated on 23rd December 1874 by Bishop Harold Browne. The vestry was added in 1878 on the north side of the nave and the south west tower and spire added in 1881.