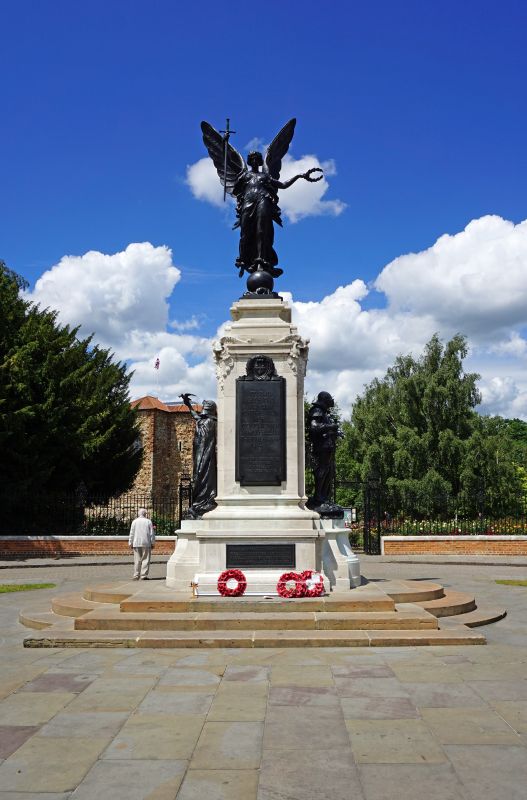 The war memorial and associated structures in Cowdray Crescent form a symmetrical composition at the entrance to Castle Park in Colchester High Street. The short paved approach to the memorial is flanked by a pair of Portland stone Ionic columns with iron lanterns.

The memorial stands at the centre of the crescent and consists of a tall classical Portland stone pedestal on three-tier granite base, surmounted by a bronze statue of winged Victory standing on a globe, holding an inverted sword and a laurel wreath. Curved projections on the east and west sides of the pedestal support, respectively, bronze statues of St George with sword and shield, and Peace holding a dove. The upper angles of the pedestal are carved with festoons and cherub heads with elongated wings.

On the front (south) face of the pedestal a raised bronze plaque with a wreathed head bearing the City arms is inscribed in Roman lettering: TO THE / GLORIOUS / MEMORY / OF THE MEN / OF / COLCHESTER WHO FELL IN / THE GREAT WAR / 1914 – 18 / THEY STROVE FOR PEACE / THEY SERVED / FOR FREEDOM / THEY DIED TO LIVE.

Beneath, a further plaque is inscribed: THE NAMES OF 1263 MEN OF COLCHESTER / HERE COMMEMORATED ARE INSCRIBED / ON VELLUM AND DISPLAYED INSIDE THE / PRINCIPAL ENTRANCE AT THE TOWN HALL. On the north face, a bronze plaque is inscribed with: TO THE / HONOUR / OF THE / MEN & WOMEN / OF / COLCHESTER / WHO STOOD FOR / KING & COUNTRY / & BEARING ARMS / OR BY THEIR WORK / HELPED TO WIN / THE WAR / 1914 – 18. / THANKS BE TO GOD / WHO GAVE US / THE VICTORY. Beneath is a plaque inscribed: AND TO HONOUR ALSO / THOSE WHO WORKED, SERVED / AND DIED IN THE FURTHER WAR OF / 1939 – 1945. A third plaque is inscribed: TO MEMBERS OF THE ARMED FORCES FROM COLCHESTER / KILLED ON DUTY OR AS A RESULT OF TERRORIST ACTION / SINCE THE END OF THE SECOND WORLD WAR.

The entrance to Castle Park comprises a fine set of wrought-iron gates flanked by quadrant walls terminating at each end with a shallow scrolled return. The walls are built in multi-coloured brick with stone copings. The central pair of gates has an elaborate scrolled overthrow bearing a relief of the Cowdray coat of arms and motto ‘DO WITH THY MIGHT’; the lower gates to either side have openwork piers; the left gate has a roundel with the Colchester City arms, the right a cartouche with a raven, the emblem of the Portreeve of Colchester. The railings have scrolled wrought-iron panels with fleurs-de-lys finials. At each of the quadrant ends of the wall, aligning with the memorial, is a tall stone pier with sunken panelled sides and festoon ornament at the head, surmounted by a bronze lion and shield. The terminal pier at the wall’s west end is surmounted by a stone urn; at the east end the wall abuts the garden walls of Hollytrees Mansion. Either side of the memorial is a fence of low granite posts and chain links.

This List entry has been amended to add the source for War Memorials Online. This source was not used in the compilation of this List entry but is added here as a guide for further reading, 12 January 2017.

The site chosen to commemorate the fallen of the First World War formed part of a scheme by Colchester Borough Council for a southern extension to Castle Park, entailing the clearance of buildings in the High Street in order to open up the approach to Colchester Castle. The memorial, designed by Henry Fehr, was conceived as the centrepiece of a new main entrance to the park laid out in the form of a crescent to the design of the Colchester architect Duncan W Clark. The castle was purchased by the Council with funds donated by Lord Cowdray, who also paid for the park entrance gates. The war memorial was paid for by public subscription, and unveiled on 24 May 1923.

Henry Charles Fehr (1867-1940) was a distinguished and prolific sculptor whose work was stylistically close to the ‘New Sculpture’ movement - the late-C19 renaissance in British sculpture which rejected the stylised neo-classicism of conventional figure sculpture in favour of naturalistic, often allegorical, forms. Fehr produced many fine public sculptures and war memorials and some exceptional work for civic buildings, notably Middlesex Guildhall, Westminster, West Riding County Hall, Wakefield, and Cardiff City Hall. Models for the statuary featuring on the Colchester memorial were shown at the Royal Academy War Memorials Exhibition in October 1919, and were used in Fehr’s identical design at Burton-upon-Trent, Staffordshire. His Peace and Victory figures were used at Leeds War Memorial, and the Victory figure at Graaf Reinet, South Africa. The decorative carving on the pedestal was carried out by the Italian sculptor Carlo Magnoni (1871-1961) who worked in Fehr’s London studio, contributing to several of Fehr’s commissions. Messrs L J Watts of Colchester were the stonemasons and the ironwork was by H H Martyn and Co, Cheltenham.

Conservation work was undertaken to the war memorial in 2010 and again including the gates and railings in 2014.

Colchester War Memorial, including lamp columns, walls, gates, piers, railings and posts at the entrance to Castle Park, is listed at Grade II* for the following principal reasons:
* Historic interest: as an eloquent testament to the tragic impact of world events on the local community, and the sacrifices it made in the conflicts of the C20;
* Sculptural interest: a notable example of the work of the distinguished sculptor Henry Fehr with finely modelled and detailed bronze statuary;
* Architectural interest: the ensemble as a whole is of considerable merit in terms of its composition, craftsmanship and high-quality materials;
* Group value: with Colchester Castle, a scheduled monument, and with several listed buildings in the High Street, notably Hollytrees Mansion to the east (Grade I), and with Castle Park, a Grade II registered landscape.