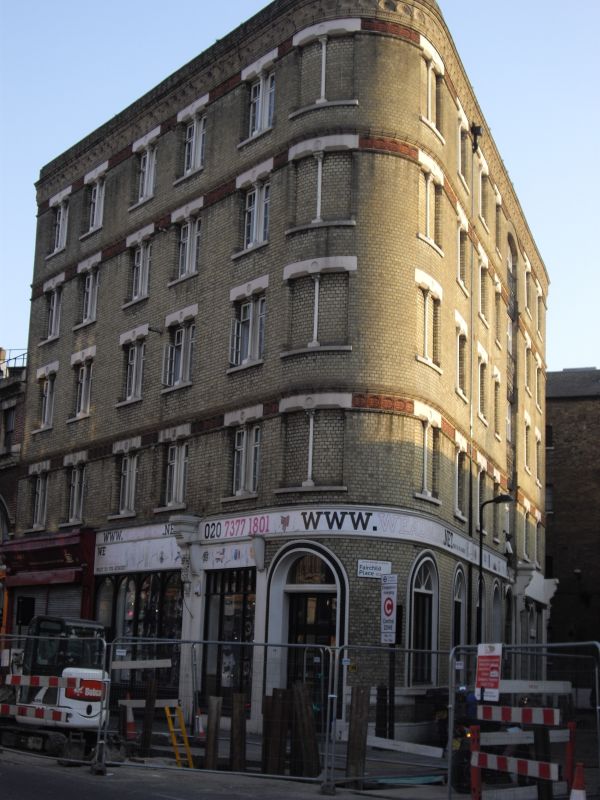 EXTERIOR: The large five-storey block fronts onto Great Eastern Street and has a return elevation to Fairchild Place, this forming an acute 'bull-nose' rounded corner that is a distinctive feature of the street planning along this thoroughfare. It is of five storeys and there are five window bays to Great Eastern Street and two shop fronts that have round-headed wooden window frames and some later alteration. The corner has a pair of blind windows, and the return to Fairchild Place has 5 window bays and an bay of original iron balconies. These have been in-filled with early-C21 windows, so that the idea of the formerly open balconies is preserved; at ground floor is wide door with architrave under the words PENNY BANK CHAMBERS; to the left of this are 3 windows and one door, each under arched windows and doors decorated with a guilloche band. The side elevation also has a shop front at the far right side, also with moulded console brackets. There have been some alterations at the ground floor, but otherwise the building remains largely unaltered.

INTERIOR: Not inspected, but noted to have had some late-C20 alterations while maintaining the original character.

HISTORY: This building was constructed in 1878 as shops, dwellings and bank premises for the National Penny Bank, and to the designs of Temple & Forster. It was one of thirteen banks to be erected by the company that was founded in 1875. The company followed the model set in Yorkshire, where in 1859 Colonel Edward Akroyd had established the Yorkshire Penny Bank in Halifax as a philanthropic organization aimed at providing a means of saving for the working classes. The National Penny Bank branches were sited on 'the main thoroughfares of the metropolis' (The Times, 22 May 1879, 10) and were initially open in the evenings and took deposits of less than a shilling. The Yorkshire and National Penny Banks were new developments in work-class terms and embodied the Victorian self-help ethos.

The Penny Bank on Great Eastern Street had a workshop in the basement and shops for letting and bank premises on the ground floor with related accommodation on the first floor. The upper storeys, accessed by a stone stair, contained the artisans' dwellings. Nos 11-15 Great Eastern Street were later used as a Post Office and were refurbished in 1984-5, and again in 2005, now being used as office and residential accommodation, as well as a small café.

SUMMARY OF IMPORTANCE: This 1878 National Penny Bank premises retains its original character, including acute bull-nosed corner, good quality materials and distinctive elevations, for which it has special architectural interest. It also represents an important banking provision set up in the late-C19 to allow working class people savings opportunities, this having particular relevance within South Shoreditch, recognised as the significant furniture manufacturing quarter in this period. The Great Eastern Street Penny Bank is a relatively early Penny Bank and only 2 other listed examples pre-date it - for this is is of historic special interest. Furthermore, it has group value with the similarly styled 8 Great Eastern Street, the pair impressively flanking the thoroughfare, cut through in 1878, as a significant Victorian Metropolitan Improvement.