The Old Vicarage, Stable and Bothy 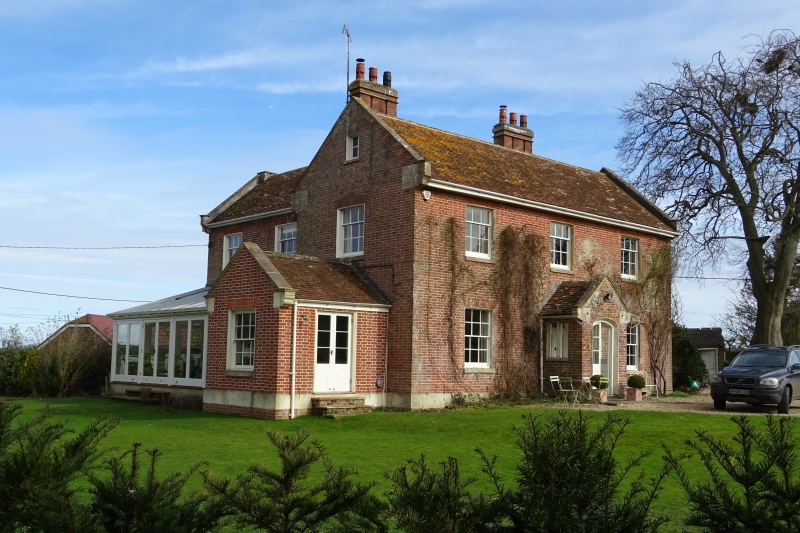 GV
II
A vicarage built in the early 1840s, of red brick, with a tiled pitched roof featuring decoratively moulded kneelers. The architect is not known.

EXTERIOR:
The vicarage building has a roughly square, central-staircase plan, with a three-bay northwest/southeast principal range, a two-bay wing to the northwest, and a former service range to the northeast. The gable ends of the two domestic wings have decoratively moulded kneelers. The building has three large, brick chimney stacks; two on the southeast slope of the principal range and one on the gable end of the service wing. The building has symmetrically arrayed sash windows of 6/6 panes on the ground floor and 3/6 panes on the first floor, with brick flat arches to the southwest front, the northwest façade and to the rear.

The principal facade to the southwest has a central, brick entrance porch, flanked by a sash window on either side and three more above. The porch has a tiled roof with decoratively moulded kneelers, similar to those on the building's gable ends. It has a central, three-centred arched doorway in stone with panelled/glazed door, flanked by two chamfered mullioned stone windows.

The north-west is defined by a projecting gable end with a rectangular glass conservatory, added in the late C20 (not of historic interest), with a sash window above and a small 4-pane casement window on the attic storey. The two bay façade to its left has four sash windows.

INTERIOR:
On the ground floor a large hallway gives access to the principal rooms to the northwest, a stone Tudor style fire place, and to the southeast, a plain wooden fire surround. In what was formerly the kitchen to the north, there is a large fireplace for a former range. All original doors, cornices and skirting boards are evident. The hallway is dominated by an open-well half-turn staircase (with contemporary cellar below), with stick baluster, mahogany wreathed handrail and curtail step, and is lit from above by a small octagonal lantern. Upstairs all original doorways, skirting boards and fire surrounds, (one with original grate), survive. A small wooden stair from the landing leads to the attic, probably former servants' rooms, and parts of the timber crown post roof are exposed.

OTHER STRUCTURES:
Circa 8 metres north of the vicarage stands a stable and gig house, with former grooms' accommodation above. It is contemporary with the house and built of brick, with a tiled pitched roof. The door openings to the south were probably widened at a later date, and to the rear is a lunet window (now filled in with brick), formerly lighting the gig house. Internally, the building has a timber framed roof, brick and quarry tiled floors, and retains some features including horse box panelling along the wall, a fixed fodder rack, a vertically planked door with strap hinges linking stable and gig house, a fixed ladder leading to the attic space above the gig house in which remains of plastering are apparent. Circa 3 metres east of the house stands a small, contemporary garden bothy built in brick with a pitched tiled roof.

SUMMARY OF IMPORTANCE:
The Old Vicarage in Charlton is a characteristic clergyman's house in late Georgian style dating from the early 1840s; it stands close to the Grade II* listed parish church. It is relatively unaltered externally, and internally its principal rooms remain unchanged in plan and retain the majority of their fixtures and fittings. Its associated contemporary outbuildings (including stable with gig house and groom's accommodation above) and garden bothy, are also mostly intact and contribute to the historic interest of the vicarage.