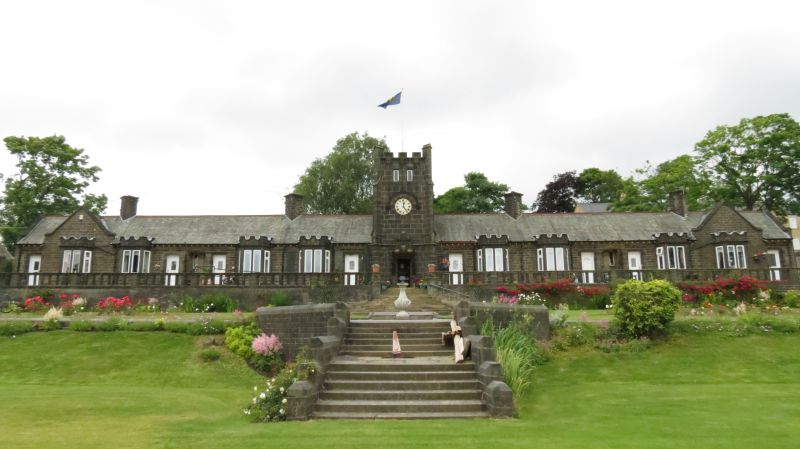 II
A complex of 20 almshouses incorporating a central clock tower. Built and presented to the town of Colne in 1911 by Sir William Pickles Hartley and Lady Hartley. Enlarged and modernised between 1960-63.

PLAN: The almshouses are linear in plan and are arranged around three sides of a rectangle containing a landscaped garden.
EXTERIOR: All the almshouses are of single-storeyed form. The east and west ranges each contain a terrace of six almshouses stepped in pairs to reflect the sloping terrain of the garden onto which they face, with the central pair each having a cross gable on the front elevation and front doors either side of a round-headed central arch beneath the cross gable. The west range has a drying room and boiler house attached to its north end while the east range has a boiler house attached to its north end. The north range contains a terrace of eight almshouses with four located either side of a central clock tower. Both end almshouses on the north range each have a cross gable on the front elevation. The front elevation of each almshouse has a canted bay window topped by crenellations with modern u-PVC windows and front door. To the rear there are cross gables and modern flat-roofed bedroom extensions executed in the same local stone as the original build. The almshouses have a mixture of gable and cross-axial chimney stacks. The clock tower is a flat-roofed, three-storey, crenellated structure with diagonal buttress and original windows. The clock face is situated on the second floor of the front façade beneath a half-rounded dripmould. Entrance to the clock tower porch is through a chamfered doorway. The porch contains wooden benches on either side and a mosaic floor depicting a central circular display of hearts in red and gold. Entrance to the clock tower is through a part-glazed timber door either side of which are round-headed blind windows.

INTERIOR: The almshouses each contain a short hall leading to the living room within which some original features such as full-length fitted cupboards and drawers, picture rails and panelled doors survive. Doors off the living room lead to the kitchen and a small hall from where there are doors off to the bathroom, storeroom and bedroom. The clock tower is used for maintenance purposes and also contains a small office and toilet. Stone steps lead up to the second floor where the interior of the clock is housed in a glass-fronted wooden case. A step ladder leads to the upper floor.

HISTORY: The Hartley Homes were erected by Sir William Pickles Hartley, founder of the Hartley's jam and preserves empire, and Lady Hartley, and were presented to their native town of Colne in 1911. Each individual almshouse was modernised and enlarged by the provision of a bedroom to replace the original bed-sit arrangement between 1960-63. The garden was renovated in 1977 to commemorate the Queen's Silver Jubilee. Further renovation and upgrading of the almshouses was carried out between 1998-2000 with the insertion of u-PVC windows and front doors.

SUMMARY OF IMPORTANCE: An carefully-executed and well-preserved complex of early C20 almshouses with a central clock tower built of local dressed stone beneath a slate roof. This development, set within a carefully planned garden landscape is of special architectural interest as an example of early C20 housing provision for the elderly, and meets the stringent criteria for listing buildings of this type and period. Although the almshouses have been subjected to some alteration to provide modern standards of comfort, these alterations have been undertaken with care to preserve the high architectural quality of the original design.