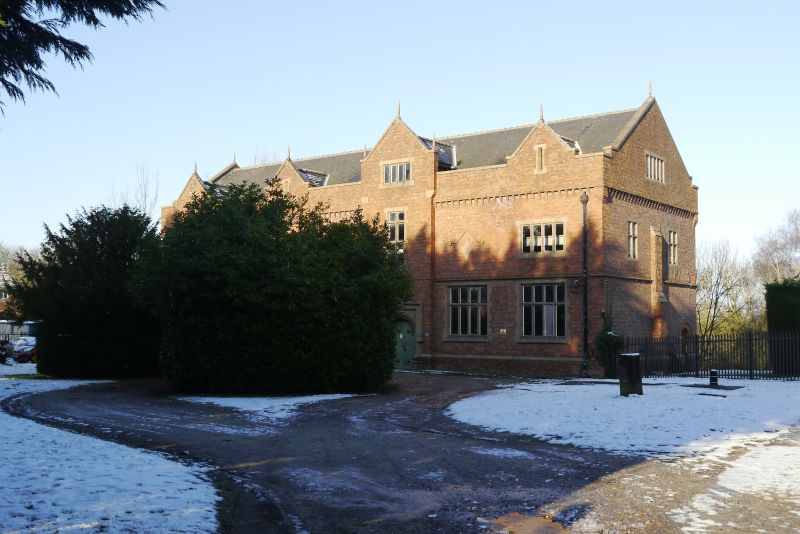 MATERIALS: It is constructed of brick with terracotta dressings and a slate roof.
PLAN: The building is of T-shaped plan comprising the principal east-west range of the engine house with a lower projecting rear boiler house.

EXTERIOR: It is in Tudorbethan Revival style, of two storeys, with attic and basement. The near symmetrical front is of seven bays with the left of centre entrance bay set forward. There is a continuous drip mould, plinth and brick corbel table interrupted only by the entrance bay. There are small finial gables to end, central and entrance bays with coped parapet. The principal Tudor arched doorway has a stopped label mould raised above a dated panel, and 2 leaf doors. The chamfered mullion windows have plate glass casements, those to the ground floor are 4 light with transoms. At first floor the gabled bays have 4 light windows with diamond panels to bays between with hood moulds over. The entrance bay has a long 2 light double transomed window with a 4 light window to the gable, the other gables have single slit windows.
Each reveal has a central buttress flanked by 2 light transomed windows and 5 light attic windows. The architectural treatment continues to the rear with the central projecting top lit boiler house which has Tudor- arched doorways, drip mould and mullioned and transomed windows.

INTERIOR: Large open engine house containing a 1907 Hathorn Davy horizontal duplex steam engine with bell cranks and tail rods working pumps extending the full length of the building. Brick pilasters at each side support the gantry crane. Within the basement at the front of the engine house is a circa 1914 iron removal plant comprising six mechanical sand filters. To the rear is the boiler house which, although having lost its boilers, is intact with the same architectural treatment as the engine house.

HISTORY: The South Staffordshire Waterworks Company (SSWC) was founded in 1853. The pumping stations for the company were all designed in house and as such Brindley Bank fits in to a recognisable sequence with other SSWC pumping stations Maple Brook and Pipe Hill, both near Lichfield. The building was designed to house two engines, although only one was installed. The pumping station is situated close to a branch of the Trent and Mersey canal which facilitated access to supplies of coal. In the early C20 sand filters for iron removal were installed in the basement, beneath the vacant area for the second engine. The pumping station was converted to electric pumps in 1969, still in operation today, at which point the boiler plant to the rear of the site was removed and the chimney demolished.

Summary of Importance: This is an important Edwardian pumping station housing a horizontal engine of rare surviving type and in excellent condition, and notable for its fine Jacobean style design. This is an unusual but successful design of engine house for a large steam engine, assessed as of clear national importance and graded for the technical historic interest of the engine.
SK0380119487