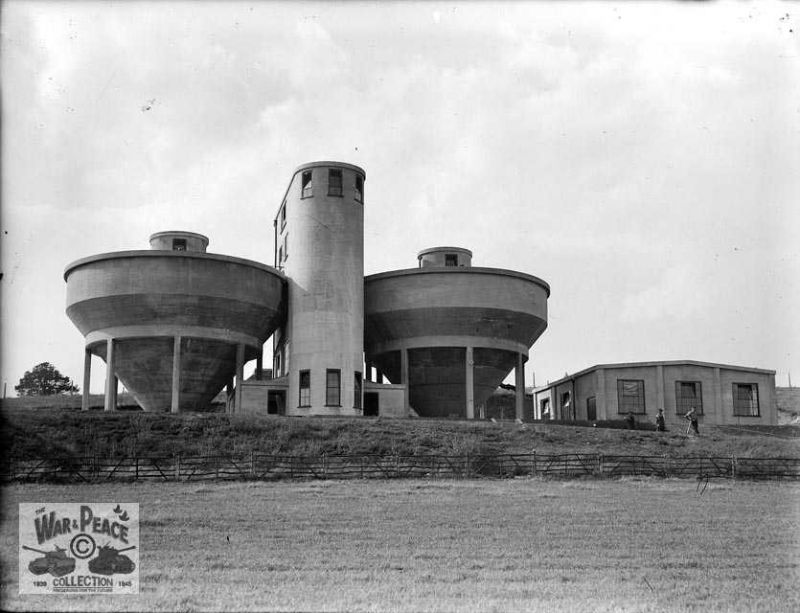 Water softening plant, of a type known as a sludge blanket clarifier, built in the 1930s, constructed of reinforced concrete. It consists of two conical tanks placed either side of an ellipse shaped central tower. Immediately to the north east is a rectangular annexe/workshop.

EXTERIOR: Each conical tank is 12.5m in diameter at the top and nearly 9m high, while the central block stands at just over 13.5m. The tanks, hopper-bottom sedimentation tanks, taper towards the bottom and are supported half way up by a collar resting on concrete uprights. On the roofs of the tanks are small circular turrets. These have three windows and a door which faces a door in the side of the central tower giving access to the roof. A large semi-circular hole has recently been knocked in the roof of the south tank, and another small opening has been cut in the side of the north tank. The central tower has metal windows to front and rear, and larger ones to the sides. The windows set in the curved ends of the structure are arranged in threes. Those at the very top and bottom are in their original openings whilst the central three were added in 2006. The bottom windows look like eight light sashes, but the top half of the window pulls open inwards: all windows open in the same way. All windows in the central tower were replaced with custom-built copies in 2006. The entrance to the workshop is through a door in the side facing the tank. There are three large windows to the front of the workshop, and similar windows in both sides.

INTERIOR: The interior of the central tower has a central area open to a ceiling three levels above and a circular tower at either end with wide flat arched openings. The central section of these towers probably contained cylindrical water tanks. Access to the ground floor is through wide, square, open arches on both sides that look out onto the bottom of the sedimentation tanks. The central area is lit by large multi paned metal framed windows in the sides at second floor level. Access to the upper floors is by a cast iron stair with handrail, set against the inside south wall, which also gives new access to an unlit middle floor within the eastern circular tower. At this point the stair takes a right angled turn and continues to the second floor. Although all machinery has been removed, various features and cast iron fittings set into the concrete indicate where it would have been located. At the top is a spacious room occupying the whole of the upper floor, well lit by large metal framed windows. Access to the roofs of both tanks is from the level below. Trenches in the roof of the sedimentation tanks continue under the floor of the interior at this level. These originally held pipes, some of which are still present. The trenches are still in part under the original cast-iron covers.

HISTORY: The water softening plant forms part of a water treatment site constructed for Mid Kent Water in the 1930s. The site includes a pumphouse dating to 1937 and a pair of semi-detached houses, both still in use and occupied and not included in the listing. The water softening plant seems to have been experimental, and was abandoned during the Second World War, only a decade after its construction, and although it reopened in 1946, it soon closed again, due in part to high operational costs. The building was sold in 2002, and discussions took place about its conversion to domestic use.

SUMMARY OF IMPORTANCE: This is a very unusual structure, certainly unique in Kent, and probably in England as a whole as no similar structures have been identified. Because its working life was short, and it was abandoned and unused for over half a century, it remains substantially intact. It is of historic interest as a record of an experiment in water processing, but also has special architectural and aesthetic interest as a piece of outstanding industrial design with powerful sculptural qualities.