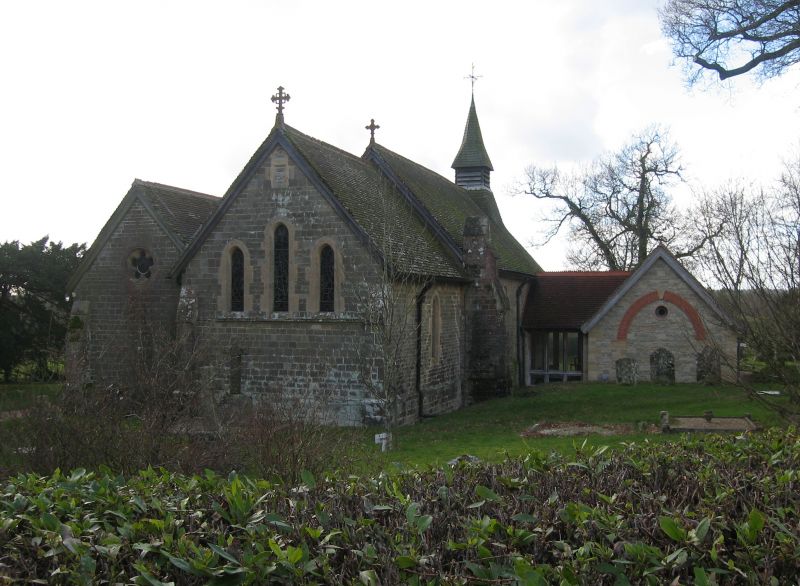 GV II
Parish Church. Nave constructed circa 1700, extended to west and bellcote built in 1814. Vestry added after 1865. The church was restored in 1886 by Lacy W Ridge FRIBA, the Diocesan Surveyor in an Early English style, which included enlarging the chancel, altering the windows, rebuilding the bellcote and adding a spire. In 1897 a south east chapel was added in matching style, probably also by Ridge.

MATERIALS: Built of local sandstone coursed rubble with ashlar dressings and tiled roof. Tiled base to bellcote with wooden bellchamber and shingled spire.

EXTERIOR: The nave has a gabled roof with terracotta ridge tiles and cross-shaped terracotta saddlestone to the east. At the western end is a bellcote with battered tiled base, square wooden louvred bellchamber and short broached shingled spire surmounted by a cast iron weathervane with gilded cockerel. The nave has a deep plinth. The west end of the nave has a circular window in the gable and two lancet windows below, all with drip moulds. The south side of the nave has a gabled south porch, mainly of stone rubble, but with an outer arch of ashlar with stone saddlestone, kneelers and arched opening with dripmould extending into a patterned gable. The cambered headed south door bears an inscription recording the original building period of the church between 1700 and 1712. The south window is arched with a quatrefoil above two trefoil-headed lights. Attached to the eastern end of the south side of the nave is a small gabled vestry with lancet window. The north side of the nave has two windows to the eastern side, a large arched window with two trefoil-headed lights with a quatrefoil above and a lancet. The chancel also has a gabled roof with terracotta ridge tiles and an elaborate terracotta saddlestone at the east end. The east end has three widely spaced lancets, the north side has a lancet window and on the south side is a gabled south east chapel or organ chamber with octagonal stone chimney at the western end and deep plinth. On the south side are two lancet windows and a wide flat-arched doorcase with plank door with ornamental iron hinges.

INTERIOR: The nave has a C19 four bay roof with crownposts and collar beams. There is a circular stone font and semi-hexagonal wooden pulpit on a stone base. The two-light north window has C15 German glass, probably from the Rhineland and probably of circa 1465. An old Kelly's Directory refers to this as formerly in the east window. The western panel depicts the Ascension and the eastern panel the Descent from the Cross. The inscription under the western panel is leaded separately and therefore probably did not originally belong to the panel above and part of the inscription under the eastern panel is also from another source. The lancet window on the north side is in Art Nouveau style, depicts angels and lilies and is of circa 1912: it is a memorial window to Harry Godwin, Rector of Lynch 1883-1912, made by Messrs James Powell and sons of the Whitefriars Glass Works EC1. The south window of the nave is of circa 1921, the eastern light depicting St John the Apostle and Evangelist holding a book and chalice with dragon and the western light depicting St Cecilia, the Patron Saint of Music, playing the regals, a mediaeval portable organ. This window commemorates a churchwarden, John Clarke Hawkshaw and his wife, and was made by Messrs William Morris and Co. The large stone chancel arch has stiffleaf capitals and there is a wooden scissor-braced roof. The south wall has three bay pointed arched arcading with marble columns between the chancel and organ chamber. The Sanctuary has a C19 decorative tiled floor. The lancet window on the north side depicts the patron saint of the church, St Luke, and was erected circa 1897 as a memorial to John Marsh, Churchwarden, and his wife. The east window depicts the Good Shepherd in the central window with angels above and the flanking windows depict some of the Angelic Host. The window was a gift from the parishioners of Lynch in 1898. The organ was installed in 1897, built by E O Yorsten of Vauxhall, London, who mainly rebuilt other organs.

HISTORY: The first church of the parish of Linch was built before 1086 on a site between Didling and Bepton. It is recorded in Domesday Book as having been in existence during the reign of Edward the Confessor. It was in ruins by about 1500, probably because of population decline in the southern part of the parish. This church was replaced by a second church on a new site at Woodmans Green, a more populous part of the parish, which became derelict about 1620. Although the church registers record that the Minister, Mr Arthur, had stones and mortar brought to rebuild the church, unfortunately he died suddenly by a fall from his horse and work was halted. The existing church was built on the same site between 1700 and 1712. An inscription over the south door records "APRIL THE FIRST 1700 PETER BETTESWORTH WAS CHOSE CHURCHWARDEN FOR TWO REPAIRE AND REBUILD THIS CHAPPEL IN LINCH AND DID CONTINUE TWELVE YEARS-1712." The building comprised the main part of the nave of the present church. In 1814 the church was enlarged at the expense of Charles William Taylor Esquire. The west end of the 1700 was enlarged, the doorway removed complete from the west to the south side with a porch built over it and a bell turret constructed over the new part without a spire. The bell bears the inscription 1814. Although one would expect the church to have had a chancel, a drawing of 1848 by Adelaide Tracy shows a building corresponding in size to the existing nave only. The drawing also shows a gabled east end to the nave and plinth continuing at the east end, pointed arched windows with diamond leaded lights, a simple porch with round-headed arch in the gable end and a simple square louvred bellcote with gabled roof and straight base. A small vestry was added at the south east end of the nave, erected after 1874 as it is not shown on the First Edition Ordnance Survey map, but in existence by 1886, and probably a small chancel was also built at that time. In 1886 the chancel appears to have been enlarged because the Consecration Deed refers to "the extension of the chancel" and the nave "restored by altering the windows and repairing and reseating it". Also a spire was added to the bell turret and the bell turret probably rebuilt and a front archway added to the porch, which is dated 1886. The works were undertaken by Mr Lacy W Ridge FRIBA, the Diocesan Surveyor. The cost of the work done in 1886 was £850, raised by public subscription. In 1897 a south east chapel or organ chamber was added, given by the Hawkshaw family, and the door into the church from the very small vestry blocked and a new entrance made. A sketch plan of 1906 by Lacy W Ridge proposing a north aisle was never executed.

SUMMARY OF IMPORTANCE: A rare example of a circa 1700 rural church, extended in 1814, on a site consecrated since the early C16 with substantially intact later C19 Early English style additions and alterations including interior fittings.