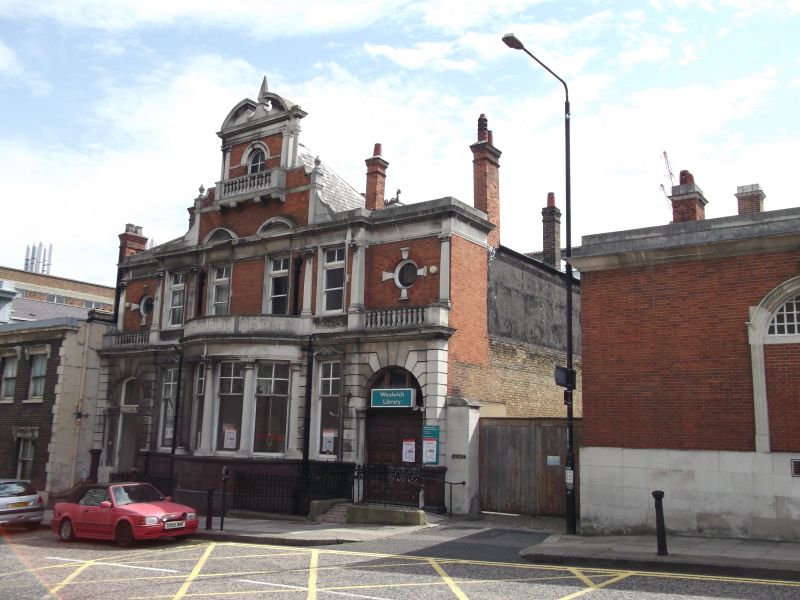 GV II
Public library, 1901 with some later-C20 alterations by Church, Quick & Whincop.
MATERIALS:
Rusticated stone first floor to Calderwood Street with polished granite plinth to bow window and red brick with stone dressings to first floor. Secondary elevation to Bathway is mostly stone with some red brick and a polished granite plinth.
EXTERIOR:
Main elevation in a free Baroque style with a central large bow window with polished granite plinth that carries the foundation details, and the words WOOLWICH PUBLIC LIBRARY in the entablature. This is flanked by recessed entrances under rounded arches within rusticated stone ground floor. The first floor is red brick with stone dressings, a circular window above each entrance and Ionic pilaster between window bays. The central frontispiece cluminates in a Dutch style gable with open segmental pediment with balustrade and finial. The windows are mostly timber sashes, curved in the bow window, and some with secondary glazing. The rear elevation is simpler and it faces the neighbouring free baths building. This facade is of two storeys in a free Renaissance style with polished granite plinth, and stone dressings to red brick walls. Seven window bays, some with in rectangular frames some with round-arched heads, and left hand entrance under oeil-de-boeuf. The bays are framed by Corinthian pilasters at ground floor and the outer bays at first floor are in rusticated surrounds and capped with pediments. Balustraded parapet and central stone plaque marked PUBLIC LIBRARY. C20 extension to east of Bathway elevation is not of special interest.
INTERIOR:
Interior largely survives well and features a number of original fittings that clearly identify the original plan. These include a grand Jacobean style staircase under a lantern, and timber part-glazed screens with leaded lights and pediment that divided off the 'magazine room' marked in etched glass on its door. The ceiling has deep moulded beams and there are a number of ionic columns, panelled piers and a series of elliptical arched openings. Some of the piers have delightful wood carving featuring an open book. Most of the shelving and the counters are late-C20 replacements. Upstairs, fixed perimeter shelving in upper reading room, where original truss ceiling is concealed by C20 dropped ceiling; full-height shelving in pair of anterooms. Other rooms now offices but originally accommodation for the librarian have two fireplaces and some cornices. Secondary stair with turned balusters from Calderwood Street entrance. Original, and the main, entrance altered somewhat.
HISTORY:
The Woolwich Library was opened in 1901, at a peak in the free library movement which began in the previous century. After 1850 a series of parliamentary acts had made it easier for local authorities to establish libraries and this, coupled with a wealth of private benefaction by figures such as Andrew Carnegie and Henry Tate, led to a vast improvement in the library provision in the period 1890-1914, of which Woolwich is a typical example. The Woolwich library was erected by the Woolwich Local Board of Health and opened by Lord Avebury on November 8th 1901. The architects were Messrs. Church, Quick & Whincop. The Woolwich Metropolitan Borough had been created just two years earlier in 1899 and a the library represents the new Borough asserting its civic self through imposing architecture.
ASSESSMENT OF IMPORTANCE:
The 1901 public library on Calderwood Street Woolwich meets the criteria for listing for its special architectural interest, seen in its proud and dignified free Baroque facade that features a central large bow window, and a second elevation that directly addresses the free baths next door. The interior survives well, with the original plan and many fittings intact, including a Jacobean style staircase, lanterns, and glazed screens. It also has historic interest as one of the first buildings erected after the 1899 creation of the Woolwich Metropolitan Borough and a strong group value as part of the remarkable municipal core of Woolwich Town Centre, where within a small area is a rich ensemble of civic buildings, closely linked through function, architecture and municipal presence.