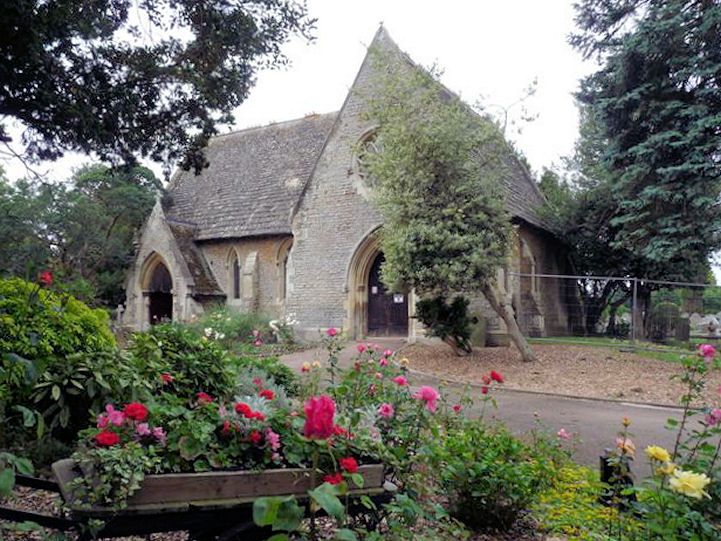 EXTERIOR: The east front has a moulded entrance-arch to the Nonconformist chapel in the gable end, with a hood-mould with carved head-stops. There is a rose window above the arch with Geometrical tracery, hood-mould and head-stops. The gable end has offset buttresses terminating in trefoiled triangular gablets. To the left the Anglican chapel has a two-light window and a lancet window with Decorated tracery, hood-moulds and head-stops, and an offset buttress in between. Its entrance porch has a moulded archway with hood-mould and head-stops. The porch is surmounted by a St James cross finial. The roof is of gradated Collyweston slate with trefoil ridge cresting, some of which is missing. Both entrances have original timber doors with decorative iron hinges and handles.

The gable end of the Anglican chapel on the south side has angled buttresses and a large three-light window with Geometrical tracery. The west side of the Anglican chapel and the north side of the Nonconformist chapel are identical, with three cusped lancet windows punctuated by two offset buttresses. The gable end of the Nonconformist chapel on the west side has offset buttresses with trefoiled gablets, and two cusped lancet windows with a trefoil window above. All the windows have clear glass in a leaded diamond lattice, some damaged.

INTERIOR: Both chapels have stained deal roofs with collar-beams, black and red Minton tile floors, and collegiate-style pews on platforms lining the two longer walls. The Anglican chapel has quotations from the King James Bible painted in Gothic script onto the wall-plate under the roof. These read from east to west: 'Blessed are the dead which die in the Lord from henceforth: Yea saith the spirit that they may rest from their labours and their works do follow them' (Revelation 14:13); 'O death where is thy sting', 'O grave where is thy victory' (1 Corinthians 15:55); 'I know that my Redeemer liveth, and that He shall stand at the latter day upon the earth: And though after my skin worms destroy this body, yet in my flesh shall I see God' (Job 19:25-26).

HISTORY: The Burial Act of 1853 authorised the provision of publicly-funded cemeteries across the country. This ushered in a boom in the construction of public cemeteries by Burial Boards run by parish vestries. Lincolnshire was one of the first counties to join the race for cemetery provision following the Act. Competitions for chapel designs were held in Boston, Grimsby, Holbeach and Louth in 1854, Lincoln in 1855 and Grantham in 1856. At Bourne, the Burial Board decided to invite a select number of architects to submit plans for two chapels in a single building and a lodge. Nearly four acres of meadow land had already been purchased, two acres for Church of England use and the remainder unconsecrated. The budget for establishing the cemetery, including the land and buildings, was £1,600; the final bill came to £2,000. The design selected by the Burial Board on 15 February 1854 was by Edward Browning, who had recently drawn up plans for a similar cemetery chapel in Stamford.

Edward Browning (1816-1882) was the son of the Stamford architect Bryan Browning (1773-1856), who designed Bourne Town Hall. Edward became a successful architect in his own right and worked from offices at No. 16 Broad Street, Stamford. There are around 30 Listed buildings attributed to him or associated with him, including the stone bridge erected over the River Welland at Stamford in 1849 (Grade II). He specialised in ecclesiastical commissions and undertook restoration, addition and rebuilding works to a number of medieval churches. He designed several rectories, including the Gothic rectory at Lowick, Northamptonshire (Grade II, 1855/6) which famously inspired its literary guests. Edward and his father both worked on alterations to Apethorpe Hall, Northamptonshire in the 1850s. In 1860 Edward designed the Ostler memorial drinking fountain, which was moved to Bourne Cemetery from its original location in the market place in 1962. He became an Associate of the Royal Institute of British Architects, and Mayor of Stamford in 1862-3.

A drawing in Lincolnshire Archives indicates that Browning's original design for the cemetery chapel at Bourne included a bell tower with a spire, similar to the one in existence at Stamford. The tower was scrapped when the estimates for construction were received, as Bourne Burial Board wanted to avoid an undue burden being placed upon the ratepayers. Browning modified the design accordingly, and the chapel as it stands today gives no hint of the tower proposal. The drawing also shows a lodge for the cemetery keeper in a matching Gothic style, which was actually built but demolished in 1960 and replaced by a bungalow.

The successful tender for the building works was by Moses Peal of Stamford (£845) and construction began in July 1854. The consecration service for the Anglican chapel and ground was conducted by the Bishop of Lincoln on 26 May 1855, and the following week all other burial grounds in Bourne attached to churches were closed by Act of Parliament. By 1904 the cemetery had been extended and almost doubled in size. Ownership of the chapel transferred to Bourne Urban District Council in 1899 and Bourne Town Council in 1974. The chapel was deconsecrated in December 2004 and is currently used as a storage facility.

SUMMARY OF IMPORTANCE:
The Chapel of Rest at Bourne Cemetery was designed in February 1854 by Edward Browning and opened in May 1855. It has special architectural interest due to its unusual plan-form which combines Anglican and Nonconformist chapels in a single T-plan building. It also has special historic interest as a very early example of public cemetery architecture outside London following the Burial Act of 1853. The architectural interest manifests itself in the subtly different ways in which the Anglican and Nonconformist elements of the building have been treated. The chapel has finely-crafted finishes such as carved head-stops, trefoiled gablets and a gradated Collyweston slate roof. It survives remarkably intact in its original setting, and retains rare collegiate-style pews.