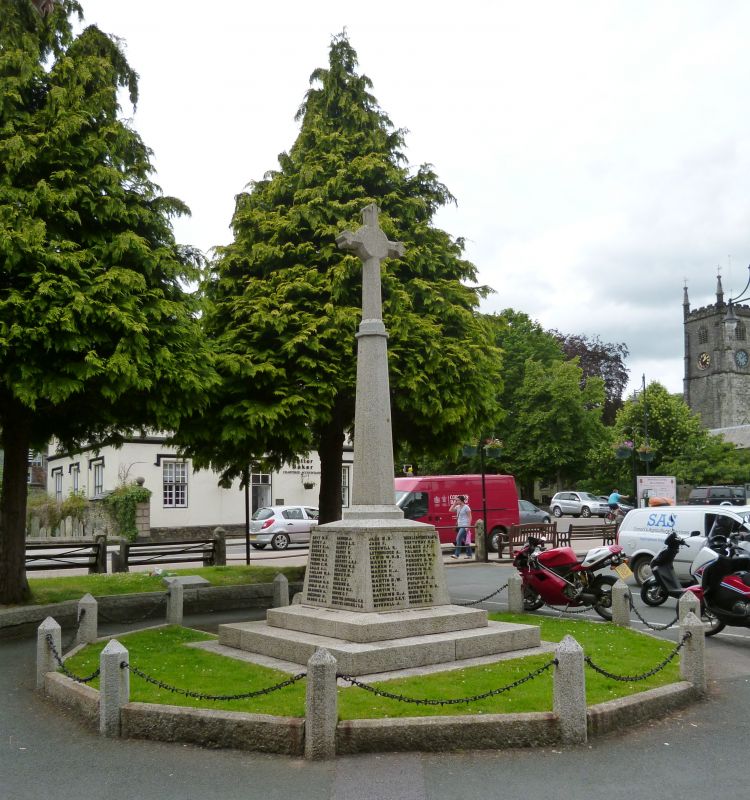 PLAN: It has a square three stepped base with a tapering square plinth, rising to an octagonal shaft, topped by a clover leaf cross. In the southwest a scrolled tablet of additional names leans on the steps. The whole is set within a polygonal stone fenced grass enclosure.

ELEVATION: The circular centre of the cross bears the logo IHS in Gothic script on the south western face. The plinth also bears the text;
'I stand/ To bear proud witness to these men of Tavistock/ who died in England in the Great War/1914 -1918.'
The names of 119 men are inscribed upon the plinth and top step. The stone tablet, set against the steps at the southwest bears following text;
`In memoriam 1939 to 45 / Also to those who made the supreme sacrifice during the Second World War', and the names of a further 40 men. The whole is set within a small grassed polygonal enclosure with a low fence of granite obelisks linked by chamfered kerbstones and a single strand of loose black metal chain. Immediately opposite the entrance to the enclosure, on the southwest, is a plain light grey granite plaque with black lettering, bearing the text; `lest we forget.'

HISTORY: The war memorial was erected in 1921, by public subscription at a cost of £450. The list was declared closed in 1923, and the World War II section was added in the late 1940s.

SUMMARY OF IMPORTANCE: War memorials are valued because of their continued relevance to society, acting both as a focal point for formal memorial services and providing a poignant finger post to the rich fabric of local history for casual passers-by. This example in Abbey Place, Tavistock is associated with other listed public statuary and civic buildings and its composition although simple, is elegant and sympathetic to its surroundings and contributes to the character of the town's Conservation Area.