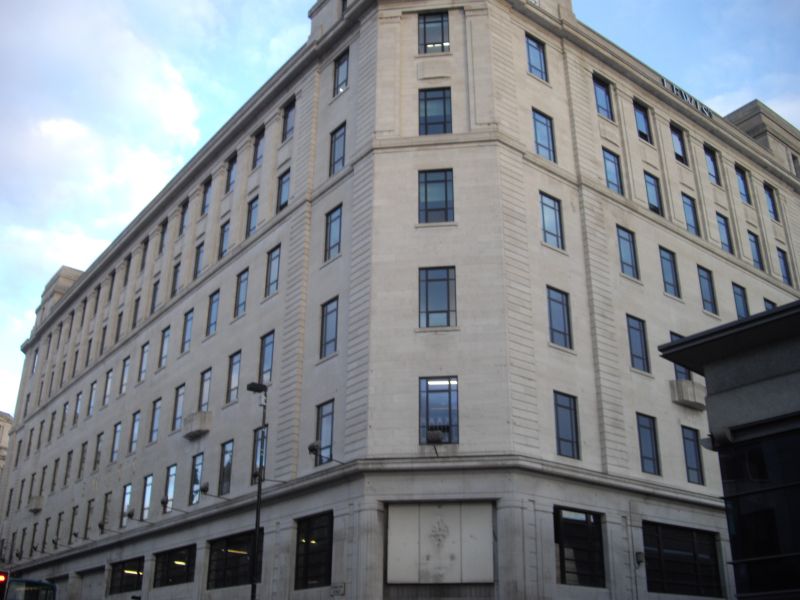 HISTORY: The first Lewis's store was established in 1856 on Ranelagh Street by David Lewis (born David Levy), retailer and later a philanthropist, as a men's and boy's clothing store. In 1864 women's clothing was incorporated and the store later expanded in the 1870s by adding further departments including shoes and tobacco. Later other branches were opened in Manchester, Birmingham and Sheffield (all now closed) and Lewis's became England's first department store chain.
After David Lewis' death the business was taken over by Louis Cohen and subsequently Harold and Rex Cohen who took the company public in 1924 and opened further stores in England and Scotland. In 1951 the Lewis group purchased Selfridges, London.
The original C19 store was replaced in stages from 1910-1923 to the classical designs of Gerald de Courcy Fraser and incorporated another adjacent building (Watson Building) to the SE along Renshaw Street into its design for use as offices and storage. The store was mostly destroyed during the Liverpool Blitz of May 1941 and was redesigned as the present store in 1947 (constructed in the late 1940s/early 1950s), again to the designs of de Courcy Fraser and constructed by Fraser, Sons & Geary. Only part of the early C20 store survived the bombing (the Watson Building) and this was retained whilst the rest of the building was rebuilt in a more modern stripped classical style. To signify Liverpool's resurgence following the war years a nude male sculpture and 3 bronze reliefs by Sir Jacob Epstein were incorporated into the new design.
After the Cohens the Lewis's group had a succession of different owners before becoming part of the Sears Group, who remained in control until 1992 when Owen Owen took over. Owen Owen retained some stores to continue trading under the Lewis's brand name but sold other stores to other retail operators. After 2001 following the closure of the Manchester store the Liverpool branch was the only store trading under the Lewis's name. Owen Owen went into administration in early 2007 and four of their stores (including Lewis's) are to be closed.
Up until 1987 the whole store was operative but with dwindling trade the top floors including the restaurants, hair/beauty salon, and the function room were closed off to the public with only the basement, ground, first and second floors remaining in retail use.
In 1959 a subway was created underneath Fairclough Street that linked Central Station with the basement of Lewis's. This still remains in use.

SUMMARY OF IMPORTANCE: A major, prominently-sited post-war department store in the stripped Classical style designed in 1947 by Gerald de Courcy Fraser and constructed in the late 1940s/early 1950s. The present building replaced an earlier store that was mostly destroyed during the Liverpool blitz of May 1941.
Lewis's department store possesses imposing main elevations and a striking overall composition and massing that incorporates a giant bronze sculpture and ciment fondu reliefs by the internationally significant sculptor Sir Jacob Epstein, which represent Liverpool's resurgence after the war years. Combined with an interior that retains its original floor plan and features including unique Festival of Britain murals in the fifth floor restaurant, a decorative plaster relief in the former hair salon, all the original stone and marble stairs and some original lifts. Lewis's is a distinctive and now rare example of a little-altered, early post-war department store with high quality architectural detailing. As such it fully merits listing at grade II.