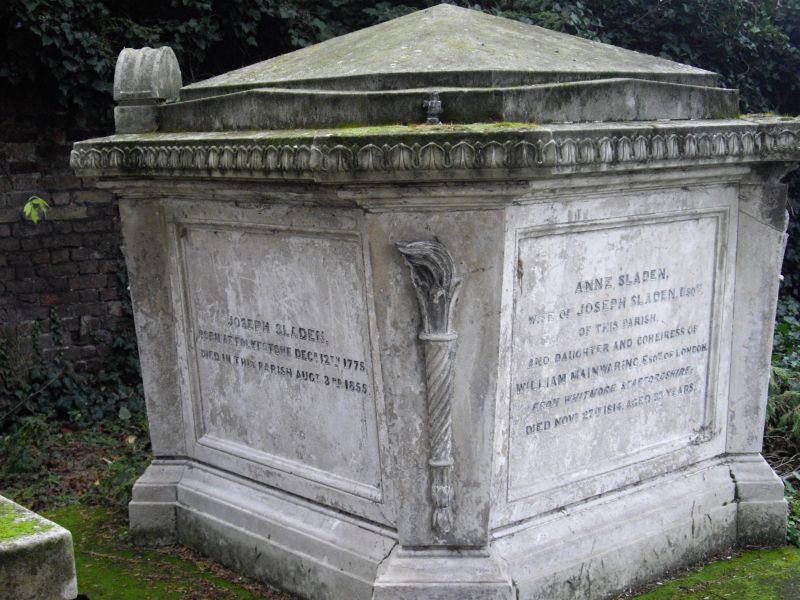 GV II
Box tomb, erected c.1814 to Anne Sladen (d.1814), and other family members. A stone Neo-Classical box tomb with tapering angle pilasters decorated with flaming torches, a symbol of mortality widely used on churchyard tombs and headstones. The cornice has a tongue and dart motif, and the top of the tomb is a shallow square pyramid. Each corner would have had a semi-circular 'Soanian style' corner terminal, but only one remains with a wreath decoration.

HISTORY: Lee old churchyard contains many notable monuments which reflect the area's Georgian past as a place of retirement for City merchants and those involved with Greenwich and the Deptford shipyards. In the centre of the churchyard stand the remains of the tower belonging to the former medieval Church of St Margaret (listed Grade II). The current Church of St Margaret stands to the south side of Lee Terrace (1839-41, listed Grade II*). The churchyard of the current church contains later tombs, being used principally between the 1840s and 1870s. A decline in usage came with the opening of Hither Green Cemetery, Lee in 1873. This tomb was erected in c.1814 to Anne Sladen (d.1814). Other family members are also listed on the tomb, including her daughter Emma Mary Sladen (d.1829).

SUMMARY OF IMPORTANCE: The tomb of Anne Sladen (d.1814), and other family members, Lee old churchyard, Lewisham, is a handsome stone box tomb in the Greek Revival style. It meets the criteria for listing as an early C19 tomb of good architectural quality.