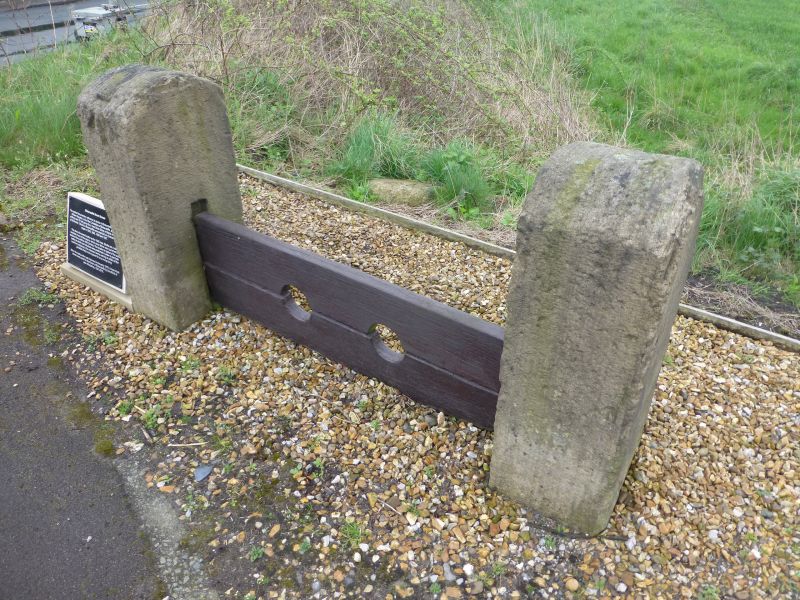 II
A set of stocks first documented in 1750 but thought to be earlier.

EXTERIOR: The stocks consist of two rectangular round-headed sandstone pillars about 1m tall, slotted on the inside, with modern timber planks containing two ankle holes. One of the stone pillars has an Ordnance Survey bench mark inscribed at the top and both pillars display some tool marks. The upper part of both pillars is more weathered than the lower part, indicating that they were once inserted into the ground to a greater depth than at present.

HISTORY: The earliest documentary reference of the existence of the Bickerstaffe stocks is a copy of `The Accompts kept by William Grayston, one of the Constables of Bickerstaffe, the year 1750', which includes the phrase, `To a new Stock Stoop a Staple and repairing of the lockes - 0. 4s. 10d.' This suggests that the stocks were already in existence by 1750. The stocks are depicted on First Edition Ordnance Survey map of 1845 and on subsequent maps of 1893, 1908 and 1927 and are still to be found at the same location as recorded on the 1845 map. The modern map, however, describes them as `Stocks (remains of)'. New timbers have been inserted recently and work has been carried out by the Parish Council in 2006 to tidy up the site of the stocks and the immediate surroundings.

SUMMARY OF IMPORTANCE: Bickerstaffe stocks were documented as being in existence in the mid C18 and map evidence shows that they have occupied their present position since at least 1845. They are a visible reminder of one of the ways in which minor felons were punished from medieval times until the C19. The location of these stocks at a major crossroad in Bickerstaffe village is typical of the public setting in which such structures were positioned in order to give both maximum exposure to the miscreant and a warning to others of the penalties likely to be imposed for any wrongdoing.