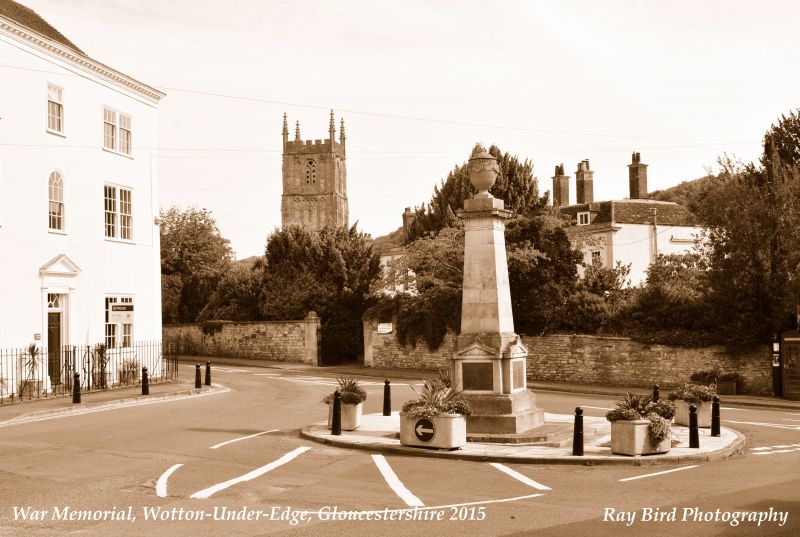 MATERIALS: The monument is constructed from dressed Portland stone, with inscribed granite plaques, and a separate bronze plaque added to commemorate those who fell in World War Two.

EXTERIOR: The monument comprises an urn atop a tapering, ashlar column of square section. To its top is a Doric frieze, and the monument sits on a square plinth, set on a platform of three steps. To each side of the plinth is a rectangular granite plaque set in a limestone surround, which has a pedimented top; this has winged decoration to either side and a stylised anthemion to the apex. The eastern plaque is inscribed : 'TO THE HONOURED MEMORY / OF THE BRAVE MEN OF / WOTTON-UNDER-EDGE / WHO GAVE THEIR LIVES IN / THE GREAT WAR / 1914-1919 / GREATER LOVE HATH NO MAN / THAN THIS, THAT A MAN LAY / DOWN HIS LIFE FOR HIS FRIENDS'. The remaining three plaques give the names and ranks of the 114 men of the town who lost their lives in the Great War. An additional bronze plaque is situated on the eastern side, affixed to the lower part of the plinth, which is cast in relief '1939-1945', with the names and regiments of the fifteen men who fell in World War Two, set over a shield with laurel leaves.

HISTORY: The monument was erected after the end of the First World War, to a design by Percy Burnell Tubbs, RIBA, whose son, Captain S B Tubbs, is one of the men who lost their lives in the First World War commemorated by the memorial. It was carved by Henry Poole, RA (1873-1928), and was unveiled in a civic ceremony on 20 June 1920. A bronze plaque commemorating the men of the town who died in the Second World War was added after 1945.

REASONS FOR DESIGNATION DECISION:
The war memorial in Wotton-under-Edge is designated in Grade II, for the following principal reasons:
* An eloquent witness to the tragic impact of world events on this community
* A striking classical memorial designed by a recognised architect, Percy B Tubbs, FRIBA, and sculpted by Henry Poole, RA
* The memorial is particularly poignant as one of the men commemorated was the son of the architect
* Group value with the listed buildings surrounding the crossroads at which the memorial is situated