War Memorial at the Junction of Church Street and High Street

A Grade II Listed Building in Easton on the Hill, Northamptonshire 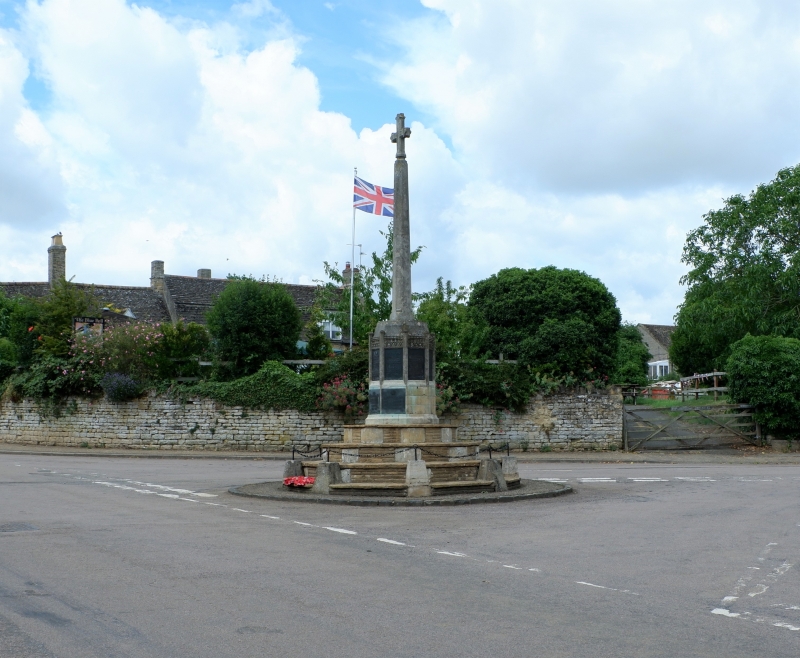 Entry Name: War Memorial at the Junction of Church Street and High Street

Civil Parish: Easton on the Hill

Built-Up Area: Easton on the Hill

Find accommodation in
Easton on the Hill

EASTON ON THE HILL

II
War memorial of Wittering Pendle and Clipsham stone, designed by Henry Traylen and erected in 1920. Four stepped base surmounted by an octagonal plinth, tapering shaft and cross. Copper plaques are on the sides of the plinth. The memorial bears the inscription `IN GRATEFUL MEMORY OF THE MEN OF EASTON WHO GAVE THEIR LIVES FOR THEIR COUNTRY IN THE GREAT WAR 1914-1918 (NAMES), ALSO IN GRATEFUL MEMORY OF THE OFFICERS, NCO'S AND MEN OF THE ROYAL AIR FORCE WHO WERE KILLED IN OR NEAR THIS PLACE DURING THE YEAR 1918 (NAMES), DIED FROM NATURAL CAUSES (NAMES), ALSO IN REMEMBRANCE OF THOSE WHO GAVE THEIR LIVES IN THE WAR 1939-1945 (NAMES).

HISTORY.
The war memorial was paid for by public subscription following a meeting in 1919 of all the villagers. The Marquis of Exeter donated gravel and stone and local men offered to build the monument. The memorial was unveiled in 5th May 1920 by the Marquess of Exeter and Major Davidson of the RAF.

SUMMARY OF IMPORTANCE.
The war memorial at Easton on the Hill is a good example of a simple, but elegant memorial in a prominent position in the village and is an important historical and architectural testament to the men from the village who died in the First and Second World Wars. There is a presumption in favour of designating free-standing war memorials as they are an important reminder of nationally and internationally significant events which had a tragic impact on local communities. The war memorial is an architecturally distinct and fitting tribute to the fallen of two World Wars.