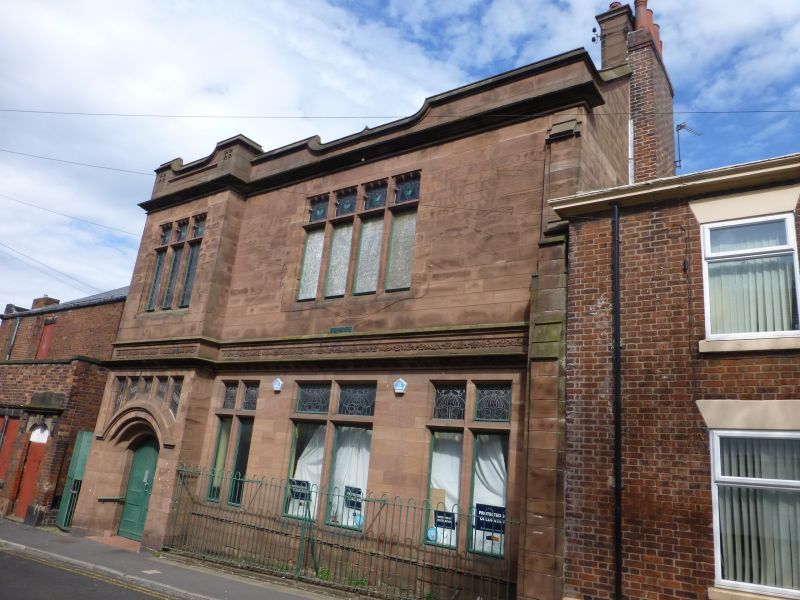 HISTORY: The library at Egerton Street was constructed c.1906 with money donated by the Scottish-American businessman and public benefactor, Andrew Carnegie. Runcorn's first free library was opened in 1882. It is believed that it was originally located in Waterloo House (adjoining the present library building), although it is not identified as a library on historic OS maps until 1899. Following the donation from Carnegie in 1906 the present purpose-built library was built on a plot adjacent to Waterloo House. The rear range of the library was built on to Waterloo House and the original E external wall of the house subsequently became an internal wall. At this time Waterloo House was used as a town hall and direct access was provided from the hall into the library via a doorway in this wall. Later in the early-mid C20 some of the ground floor rooms of Waterloo House's rear range were opened up into one large room and subsumed into the library. A single storey building to the rear of the site, which originally formed part of the Technical Institute on Waterloo Road was also incorporated into the library at approximately the same date and is accessed through the Waterloo House room.

The first Carnegie library was established in 1879 when Andrew Carnegie provided funds for a library in his home town of Dunfermline, Scotland. Following this, further libraries were established with his grants (for buildings and equipment, not books) across the English speaking world (particularly the US). Local authorities were required to provide a site for the library and levy a rate of 1d. to cover its maintenance. The first grant for a library in England was at Keighley, West Yorkshire in 1899. By the time of his death in 1919 Carnegie had provided grants to 380 libraries in the UK.

SUMMARY OF IMPORTANCE: A library dating to 1906 and constructed with a grant from the Scottish-American businessman and public benefactor Andrew Carnegie.

The large room forming part of Waterloo House and the rear annexe (which now both form part of the library) are not part of the original library building and are not of special interest. Consequently these areas are excluded from the listing.