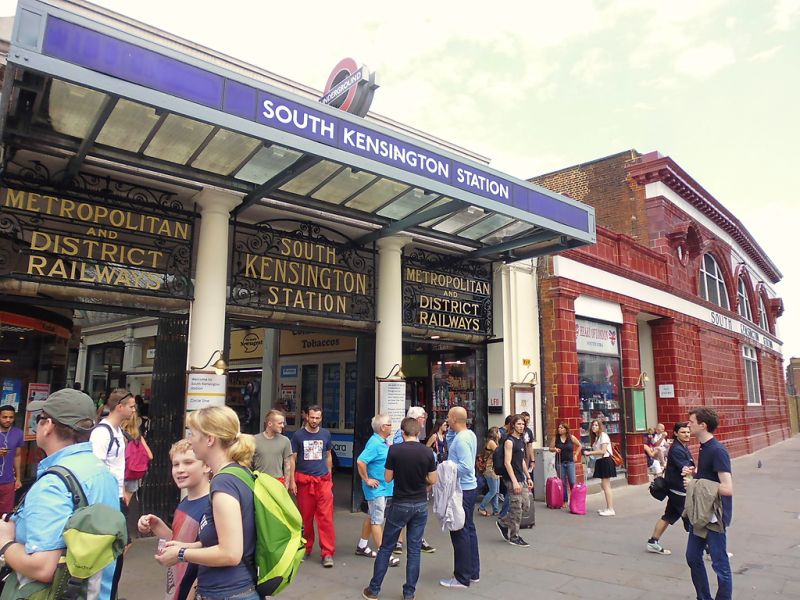 South Kensington Underground Station. 1867-68, substantially altered 1907. Original design by Sir John Fowler, engineer to the Metropolitan Line; Edwardian arcade by George Sherrin.
EXTERIOR: Arcade at street level, running from Thurlow Street to Pelham Street, with a glazed barrel-vaulted roof above shops on each side. Wrought iron screens at either end inscribed SOUTH KENSINGTON STATION and METROPOLITAN AND DISTRICT RAILWAY.
INTERIOR: Arcade is lined with shops: seven on west side, six on the east. Two retain original glazed shop fronts of high quality. Doric pilasters divide the units. At upper platform level, used by the District & Circle Lines, original arcaded revetments of pale yellow brick remain in situ: the lower tier of tall arches has keystones, header arches, imposts and bases while the shorter upper tier has gauged arches with keystones.
HISTORY: This station terminated the southward continuation of the world's first underground railway line, and was opened on Christmas Eve, 1868. It was originally called Brompton Exchange. In 1871 the District Railway constructed extra platforms and a separate entrance here, the company having fallen out with the Metropolitan Railway. In 1905-06 a deep-level Piccadilly Line link was constructed: Leslie Green designed a separate entrance on Pelham Street. At this time too the Metropolitan Railway engaged George Sherrin to remodel the entrance and booking hall, and to lay out a street-level arcade between Thurloe and Pelham Streets. Sherrin was responsible too for replacing Fowler's iron spans over the platforms with the present wood roof carried on iron columns. The booking hall was substantially altered in 1951.
ASSESSMENT OF IMPORTANCE. The special interest of South Kensington Station resides in the survival of the arcaded 1867-68 revetments, which belong to the first generation of underground architecture anywhere in the world. Sherrin's arcade possesses special interest as a fine survivor of Edwardian retail architecture. The rest of the station is not regarded as possessing special interest, although the 1907 Leslie Green-designed frontage on Pelham Street clearly makes a positive contribution to the conservation area. The underpass to Exhibition Road is separately listed.