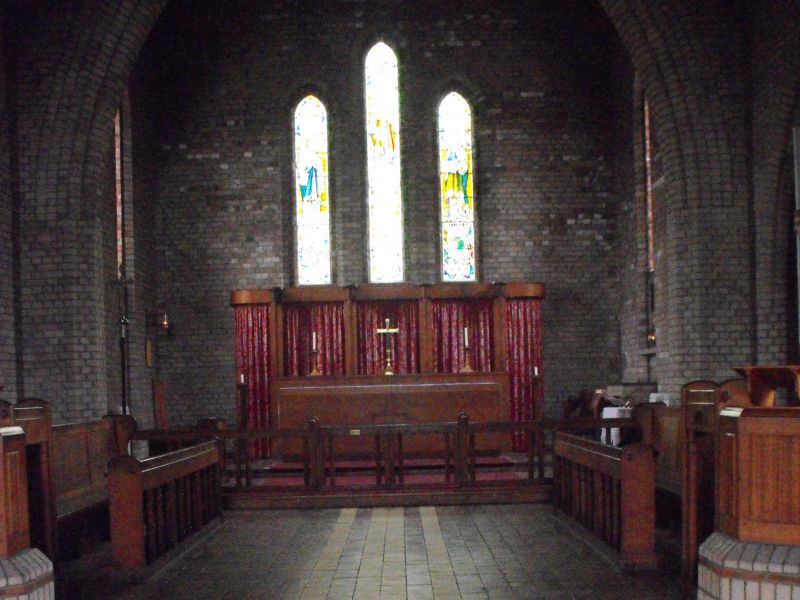 II
Church of England church 1934-5 by Sir William Milner of Milner and Craze, in Arts and Crafts influenced medieval style.

PLAN
Nave of 3 bays with narrow side aisles, all under a single roof that extends to cover the 2 bay chancel. Gabled wings extend from the western bay of the chancel, the shorter one to the north forming a porch providing access to the east end of the north aisle, the longer wing to the south forming the choir vestry which in turn has a short cross wing extending eastwards forming the clergy vestry. Linking the clergy vestry and the chancel is the organ chamber which continues the line of the south aisle on the east side of the choir vestry. Rising from the angle between the organ chamber and the chancel is a short bell-cot.

EXTERIOR
The Chancel is marked with a tall, 2 stage plinth and deep set, double chamfered, lancet windows with one window to each side wall and a triple east window. Above the east window there is a ventilation slit in the form of a Latin cross and the east end is supported by sloped angle buttresses. The roof covering ends with a simple verge with no finial.

The Nave and side aisles are under a single roof, with a slightly shallower pitch over the aisles. The west end has triple, square headed lancets lighting the nave with a single ventilation slit above. Below the windows there is a lean-to roof to the broad but shallow extension containing the west door and the baptistery to the right. The square headed west double door is formed with broad vertical planks with moulded cover fillets, square headed nails and strap hinges. The door is flanked by plain square headed windows and sloped angle buttresses. The aisle side walls each have three 5-light mullioned windows beneath Tudor style hoodmoulds. The windows are separated by sloped buttresses. Beneath the windows the walls are thickened, with the use of 6 courses of plinth bricks, to the thickness of the buttresses.

The North Porch has a tall, simple plinth, angle buttresses supporting the sides and a steeply pitched gabled roof, the gable featuring tumbling-in brickwork. The entrance is a double-chamfered pointed arch beneath a simple hoodmould that is closed with a pair of broad-plank doors of similar construction to the west door.

The Vestries have a tall simple plinth, and mullioned windows beneath hoodmoulds. The south elevation includes a square headed priest's door of similar design to the west double door. Junctions between the 2 vestry roofs and the main roof of the church all feature tiled valleys. The choir vestry roof has a simple ridge stack.

The Organ Chamber links the clergy vestry with the chancel. It has a single-light square-headed east window beneath a hoodmould. Above is a short bellcott with a pitched roof housing a single bell.

INTERIOR
The 2 bays of the Chancel are divided by a double-chamfered pointed arch that supports the double purlinned roof. The east chancel bay, forming the sanctuary is lit by lancet windows with double chamfered reveals. The east windows are filled with pictorial stained glass, featuring The Good Shepherd in the central lancet with St Matthew in the left and St Luke in the right lancet. The windows in the side walls are clear glazed with square lattice leaded glass. Below the south lancet window there is a brick built piscina. The west bay of the chancel, forming the choir, has a blank north wall and a double chamfered arch opening up the organ chamber to the south. The organ is flanked by passageways to the 2 vestries to the south. The choir retains oak choir stalls. Beneath the triple chamfered chancel arch are matching oak partitions with linen-fold panelling that rises from brick plinths to form the pulpit to the north and lectern to the south.

The broad Nave is flanked by narrow side aisles. The nave arcades each have 3 wide arches that are pointed and double chamfered, supported on octagonal pillars without bases or capitals. The pillars also support single chamfered arches spanning the aisles as well as brick and tile corbels supporting the roof trusses.The roof structure features 3 open, arch-braced trusses that support double purlins. Each truss has a high collar supporting a kingpost to the ridge plate. The base of each principal rafter is tied to the arch brace with a sole plate. This sole plate is supported on the corbel via a post that is tied to the foot of the arch brace. All joints are wooden pegged rather than bolted. The west wall of the nave is plastered and probably supported by a steel joist as it is open to the shallow west extension with the lean to roof. This wall is believed to have been a temporary measure in expectation of the planned addition of 2 further bays and a west tower. Inside the west door there is an internal storm porch built in oak with linen fold panelling. To its south is a Lutyens inspired font formed in concrete with an oak cover. The nave includes a full set of oak pews. The Aisle windows have single chamfered surrounds that extend to the floor. They have metal framed windows with square lattice leaded clear glazing, except for one of the south aisle windows which features a memorial in stained glass.

Both the Porch and Vestries feature oak doors and built in cupboards. Windows are plain glazed in a similar way to the aisle windows.

HISTORY
St Matthew's church was designed by Sir William Milner of the London based firm of Milner and Craze to replace a C19 chapel of ease. Milner and his partner Romilly B Craze, were active Anglo-Catholics with connections with the Anglican Shrine at Walsingham. Their firm designed several mid C20 brick churches in the East Riding.

The foundation stone for St Matthews was laid in 1934 and the church was consecrated by the Archbishop of York in 1935. However the church was not completed to the original design as the western 2 bays of the nave and a large west tower flanked by porches were omitted. The design of the church was reported in a complementary manner in The Builder magazine on three occasions: in 1934, 1935 and 1938.

* It is a well executed and carefully detailed design reflecting Arts and Crafts influences
* It is little altered and retains original fixtures and fittings of high quality
* It represents the work of nationally renowned church architects of the inter-war period which combines traditional detailing and spatial planning with a more contemporary leanness of line and form.