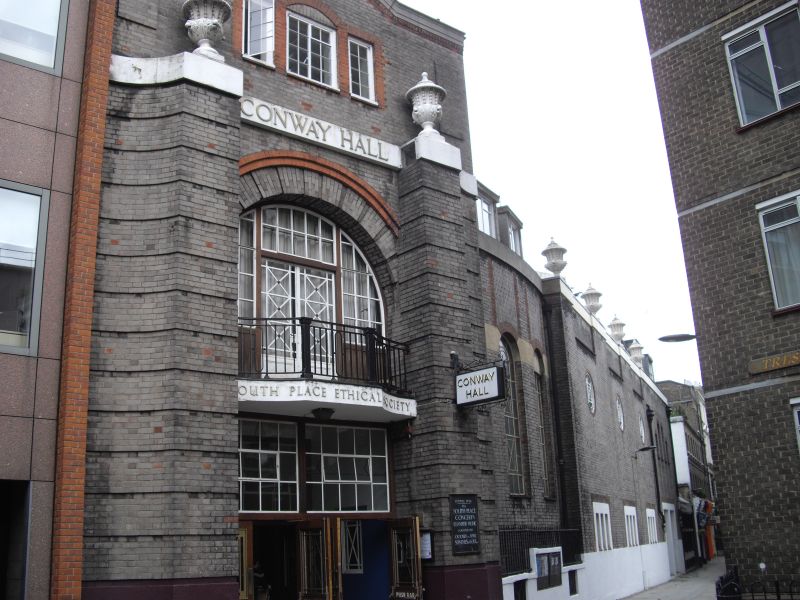 PLAN: Lobby accessed from Red Lion Square leads to central corridor connecting with entrance from Theobalds Road. Second hall and main hall are accessed from the corridor, the latter also from the lobby and a further entrance to the building on Lamb's Conduit Passage. The staircase leads to the first floor library, offices and the gallery of the main hall. Elsewhere, on the upper floors of the Theobalds Road building and the third floor of the main hall, are offices and accommodation for a secretary and a caretaker.

EXTERIOR: The site of Conway Hall is an awkward one and only one element of the brick building has a wide aspect - the entrance foyer facing Red Lion Square at a slightly acute angle. Consequently this is the grandest element of the design and has a large round-headed French window set into gauged red and grey brickwork with a curved iron balcony above a wide entrance, the whole accentuated by flanking stone quadrant piers with horizontal rustication and topped with stone urns. The third storey contains a Venetian window with red brick dressings, above which is a pedimented parapet with a stone cornice. The balcony has the words 'South Place Ethical Society' inscribed in its base and a stone course, painted white, above the arched window bears the inscription 'Conway Hall'. The sense of movement created by the quadrant piers is maintained as the elevation continues along narrow Lambs Conduit Passage: the next section of the façade has a shallow curve, which hints at the staircase it houses, three round-arched windows and three dormer windows. The rest of the façade is the hall itself and contains mullion windows on the ground floor (which light the fire escape passage running alongside the hall) and round windows set high in the elevation which light the hall's southern gallery. All the windows contain the original metal frames. There are further stone urns along the parapet of the hall section of the building; all the urns were salvaged from a bank building in the City which was being demolished at the time of Conway Hall's construction. To Theobalds Road, the building incorporates a mid-late Victorian terraced house and ground floor shop. Its essentially domestic appearance has been adapted to function as a second entrance to the hall: there is a double-door recessed into what would have been the shop-front and blue mosaic signage on the façade which reads 'South Place Ethical Society / Conway Hall / Sunday Lectures 11.a.m.' in gold letters.

INTERIOR: Largely unchanged since 1929. There are five principal areas of note: the lobby, the staircase, the central corridor, the library and the main hall. The lobby is lined with polished reconstituted stone and has a tiled floor. There is a two-bay arcade with tapering shallow arches supported by a central marble Tuscan column with a plain capital, which divides the foyer from the staircase area. Similar arched openings lead off the lobby to the central corridor and to the bar area (formerly the ladies cloakroom). The staircase is also made of polished reconstituted stone and cantilevers from three sides of the stairwell which is lit by large windows and contains a hanging lantern. The balustrade is solid stone and has a stone seat set into it on the first floor landing. The central corridor, leading from the lobby to the secondary entrance from Theobalds Road and providing access to the main hall, cloakrooms and a smaller hall, is tiled and lit by skylights. The first floor library retains its original parquet flooring, clock, fireplace and bookcases; inscriptions record that the latter two fixtures were bequeathed by or in honour of Society members. It is lit by a skylight and a pair of French windows which lead to a balcony at its southern end. Plans that the library would expand to fill a gallery were never executed. The library retains its original light fittings.

The main hall is panelled and contains a stage and a concrete gallery on three sides. It originally seated 325 on the ground floor and 178 in the gallery and the original fixed and numbered seating survives in the gallery. The capitals of the pilasters flanking the proscenium contain panels with bas-reliefs of a man, woman and child holding a light (to the left) and a mirror (to the right); the latter may symbolise self-knowledge, a theme alluded to in the motto painted across the proscenium arch 'To thine own self by true'. The gallery is faced with oak plywood, and has balustrading in a metal lattice design; the original clock also survives. The shallow barrel vault ceiling contains skylights which are currently blocked. Behind the stage is a second staircase providing access to the gallery; on the landing are original lockers used by musicians.

In addition there are a number of rooms of lesser interest: rooms behind the stage, offices, a former caretaker's flat, a former secretary's flat and cloakrooms. The section of the building facing Theobalds Road, the mid-late Victorian terraced house, retains its plan and features including several fireplaces.

HISTORY: Conway Hall was built in 1929 as the headquarters of the South Place Ethical Society. The Society was previously based in a chapel in South Place, Finsbury and hoped that this new purpose-built hall would, in the words of a pamphlet issued in 1927: 'enable the South Place Ethical Society to continue and increase its work and activities for a fuller and more vigorous moral, intellectual, and religious life... It is the aim of the Trustees and Committee to place at the disposal of the members and visitors from the Provinces, British Dominions, United States of America and other countries, Headquarters in the heart of London, where men and women of advanced thought could meet and enjoy the amenities of social discourse, with facilities for writing, rest and refreshment'. Plans were prepared for 'a dignified and commodious building' by a Society member, Frederick Herbert Mansford (1871-1946), a Licentiate of the Royal Institute of British Architects, and the hall was built at a cost of about £45,000. Its name was chosen in honour of Moncure Daniel Conway (1832-1907), an anti-slavery advocate, supporter of free thought and biographer of Thomas Paine. The choice of Bloomsbury as the location for the new hall may have been influenced by the area's connotations of intellectual radicalism in the early C20, mainly through the reputation of the Bloomsbury Group circle of writers, artists and thinkers.

The society stemmed from a group of Christian dissenters and originally appointed ministers of religion as leaders. In 1888, however, the it was renamed the South Place Ethical Society and hence became allied with a general movement promoting nontheistic religion established by Felix Adler in New York City in 1876 (although members at the time later forced the minister who had enacted the name change, Stanton Coit, to resign because they did not want to be part of the British branch of this movement). From 1897 the South Place Ethical Society appointed lecturers instead of ministers to deliver a Sunday address, preceded and followed by music. A number of ethical societies were established in the late C19 and early C20 in London, Cambridge and Cheltenham amongst other places, but the movement remained largely east-coast American in popularity. The South Place Ethical Society is the only remaining such society in the UK. In its early days it was connected with a number of important figures including Joseph McCabe, the secularist writer and lecturer, Herbert Burrows, a socialist reformer, and John Hobson, social theorist and economist.

Frederick Herbert Mansford was the architect of a number of schemes in London, including houses, offices and a restaurant on Earls Court Road in 1913, none of which is listed. Conway Hall was the most high-profile commission of his career.

The site of the hall was occupied by the Raglan Music Hall in the 1870s. This building was demolished before the end of the C19 and terraced houses built along Lambs Conduit Passage. These were cleared to make way for a second large building, possibly a hall, built in the Edwardian period, which was in turn replaced by Conway Hall in the 1920s. The site abuts one of the mid-late Victorian terraced houses on Theobalds Road which was adapted in 1929 to provide a second entrance to Conway Hall.

REASONS FOR DESIGNATION DECISION: Conway Hall is listed at Grade II for the following principal reasons:
* it has special architectural interest in its elegant design of which the elevation to Red Lion Square is particularly handsome with its grand classical entrance bay and stone urns along the parapet;
* the interior of the building is finished with quality materials, and is largely intact;
* this significance is enhanced by the historic interest of the building as the headquarters of the South Place Ethical Society, a long-standing, free-thinking organisation to which a number of important figures have been connected in the past.

* it has special architectural interest in its elegant design of which the elevation to Red Lion Square is particularly handsome with its grand classical entrance bay and stone urns along the parapet;
* the interior of the building is finished with quality materials, and is largely intact;
* this significance is enhanced by the historic interest of the building as the headquarters of the South Place Ethical Society, a long-standing, free-thinking organisation to which a number of important figures have been connected in the past.