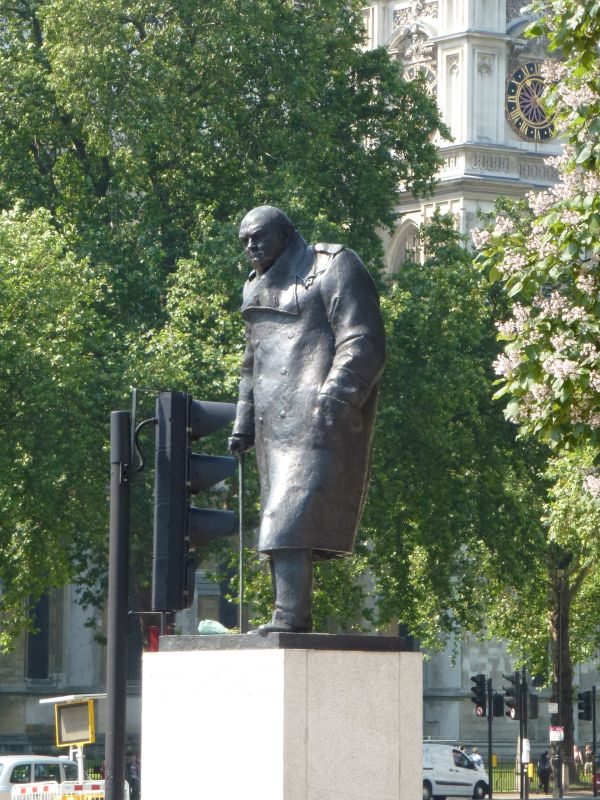 DESCRIPTION: of darkly patinated bronze, the statue of Churchill stands on the north-east corner of Parliament Square opposite one of the key entrances to the Palace of Westminster. It shows Churchill as a powerful, stocky, figure in a naval overcoat leaning informally on a stick and gazing, somewhat defiantly, towards the Houses of Parliament. At 12 feet (3.66 m) the figure is markedly over-life size, and stands on an 8-foot (2.44 m) high, roughly square, white stone plinth, along the top of the front edge of which CHURCHILL is carved in an elegant serif font.

HISTORY: The land between the Houses of Parliament and Westminster Abbey was cleared, notably under an Act of 1806, to provide an appropriate setting - Garden Square - for those buildings. The area was redesigned in 1868 by Sir Charles Barry to give a central enclosure which was smaller than is now the case, and with a somewhat larger green strip to the west. The present arrangement, a lawn with formal paved walks, seats and trees on the north and west sides, dates from 1949-50 when improvements to traffic conditions were embarked upon as part of the preparation s for the Festival of Britain. This design, by George Grey Wornum (1888-1957), won the RIBA Gold Medal in 1949/50. It is included at Grade II on the Register of Historic Parks and Gardens.

The statue of Sir Winston Churchill was installed on the north-east corner of the Square in 1973. Commissioned in 1971, it was sculpted by Ivor Roberts-Jones (1913-96). A Welshman, Roberts-Jones studied in the 1930s at Goldsmith's College of Art and the Royal Academy Schools. After war service in Burma he returned to London to teach art and to pursue a career as a figurative sculptor, having his first solo show in 1953. Commissions soon followed: a half life-size bronze of St Francis for the Lady Chapel, Ardleigh Church, Essex (1955), and a portrait head of Somerset Maugham for Lord Beaverbrook (1961), while the Tate Gallery purchased a portrait head of Paul Claudel (1960). The Welsh Arts Council organised a travelling show of his work in 1961. His first full-scale commission was completed in 1967, a figure of Augustus John installed at Fordingbridge, Hampshire where the painter had lived and died. This led to Roberts-Jones's election as an associate of the Royal Academy in 1969. During the making of the Augustus John memorial he was appointed Head of the Sculpture Department at Goldsmiths (1964-78), and it was while he occupied this key position that the Royal Fine Arts Commission asked him to undertake the Churchill commission, carried out between 1970 and 1973. He was elected a Royal Academician in 1973, and made a CBE in 1975. A further Winston Churchill monument was commissioned from Roberts-Jones for New Orleans in 1977.

Sir Winston Churchill (1874-1965) had a remarkable career as a parliamentarian, statesman, writer, and most memorably as Britain's war-time Prime Minister (1940-5). During the war years his was an immediately recognisable figure - the epitome of the bulldog spirit he fostered - stocky, bald-headed and somewhat hunched, his public image being amplified with carefully selected props such as siren suits and cigars. However, at the end of the war his stock with the electorate was low, and memories of pre-war dole queues and a desire for change swept him out of office in 1945. He returned as Prime Minister in 1951 but by then he was clearly too old to effectively undertake such high office and gave way to Anthony Eden. He remained in the Commons, however, until 1964 when he was finally persuaded not to stand again. He died a few months later, aged 90. His state funeral was the first to be accorded to a commoner since that of Arthur Wellesley, Duke of Wellington, in 1852.

REASONS FOR DESIGNATION DECISION: The statue of Winston Churchill in Parliament Square is designated for the following principal reasons:
* As perhaps the best-known public work by Ivor Roberts-Jones, a highly-regarded British artist of the mid-C20;
* As a highly-regarded sculptural representation of England's iconic war-time Prime Minister;
* For its contribution to Parliament Square (a registered historic park and garden), a key public space alongside the Grade I Houses of Parliament and to the setting of the Palace of Westminster;
* Group value with the other listed statues on Parliament Square.

The statue of Winston Churchill in Parliament Square is designated at Grade II, for the following principal reasons:
* As perhaps the best-known public work by Ivor Roberts-Jones, a highly-regarded British artist of the mid C20;
* As a highly-regarded sculptural representation of England's iconic war-time Prime Minister;
* For its contribution to Parliament Square, a key public space alongside the Houses of Parliament, and to the setting of the Palace of Westminster;
* Group value with the other listed statues on Parliament Square.