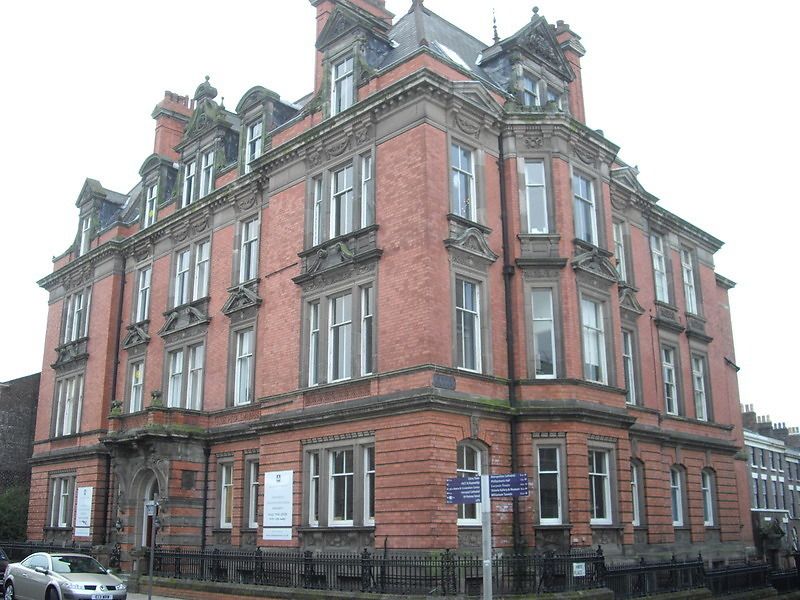 II
A former Homeopathic Hospital and Dispensary of three storeys plus basement, lower basement and attic. It was designed and built in the Queen Anne revival style with French influences in 1886-7 at the expense of sugar merchant Henry Tate to a design by the Liverpool architects F. & G. Holme.

EXTERIOR: The front elevation faces Hope Street. It has wrought iron railings set on a low brick wall topped with chamfered sandstone copings that enclose the basement area and run the full length of the Hope Street and Hope Place elevations. There is a central projecting round-arched porch fronted by steps with adjacent ornate low gateposts set at the termination of the railings. The front elevation has projecting outer bays with tripartite windows and three central bays with paired central windows flanked by single windows. The ground floor has channelled brick rustication and is separated from the first floor by a moulded band. Above the porch there is a balcony supported by carved brackets. To either side of the balcony, immediately above the moulded band, the words 'THE HAHNEMANN HOSPITAL AD 1887' are picked out in relief. The first floor windows are separated by swan-neck, segmental and triangular pediments and the second floor windows by stone swags set within a frieze and oversailed by a dentil cornice. The attic is lit by gabled dormers aligned with the windows below, with particular elaboration on the central dormer. Two tall brick chimney stacks are positioned on the central tiled ridge of the roof. The two return elevations are similarly richly designed and each has a full height canted bay window lighting the former wards. Further down Hope Place there is a brick side entrance with a stone pediment above inscribed 'DISPENSARY ENTRANCE'. The rear elevation is of plainer brick and apart from the wing overlooking Hope Place is of a more functional and less elaborate design. There is an iron fire escape, a full-height polygon brick chimney, cupolas and two tall chimney stacks.
An adjacent early C20th former nurses home and the 1930s-built mortuary at the rear of the building are not included in the listing.

INTERIOR: The Hope Street entrance leads through a pair of solid panelled doors into a vestibule richly decorated with a mosaic floor, glazed terracotta tiles, niches, pedimented viewing windows and a coffered plaster ceiling. Steps lead up through a pair of part-glazed timber doors with side lights and fanlight into the ground floor corridor that has a polychrome tiled floor and timber boarded dado. Close by there is a full-height staircase with an original hydraulic lift in the stairwell. The staircase has turned and polished hardwood newels, swept and moulded handrails and wrought iron balusters. There is a tiled dado running the full height of the staircase. The lift is an early example of a hydraulic lift. It has metal gates incorporating the letters HH. The hospital interior is relatively plain. The ground floor comprises small offices, the former matron's sitting room, and the former head surgeon's room complete with original fireplace and ceiling rose. The first floor has a large ward on the building's south side complete with ward sister's observation window, smaller isolation wards, offices and sanitary facilities. The second floor virtually replicates the first, however, it contains a room that functioned as the operating theatre complete with light well on the building's north east corner. Numerous wall-mounted ventilation panels are still to be seen in the former wards and some original ward doors with door furniture survive. The attic contains offices, the basement and lower basement contain little of note with the earlier heating and ventilation system having been replaced.

HISTORY: The thinking behind homeopathic medicine was developed in Europe, notably in Leipzig and Paris, in the late C18th and early C19th by Samuel Hahnemann. By the end of his life homeopathy had gained a large number of supporters and it was introduced into England by Dr Harvey Quin, a friend of Hehnemann. The first homeopathic hospital was opened in 1832 and England's first homeopathic hospital was opened in London in 1850. Homeopathic medical schools were constructed all over Europe until the early part of the C20th, after which time homeopathic treatment went into serious decline.
The Liverpool Hahnemann Hospital and Dispensary was opened in 1887 on a site in Hope Street chosen as the highest and therefore the healthiest available in the city at that time. It was built and equipped largely at the expense of the sugar merchant Henry Tate to a design by the Liverpool architects F. & G. Holme and was intended as a free gift to the citizens of Liverpool, providing treatment for the poor, both as in and outpatients. The hospital had 52 beds on wards situated on the first and second floors and operated as a public general hospital. It had an accident department and took cases similar to those admitted to other general hospitals, the only difference being that medicines were prescribed according to the Law of Similars discovered by Samuel Hahnemann. The hospital maintained two Homeopathic Dispensaries, one founded in 1841, the other in 1872. Its design and fitting out reflected the ideas on ward layout and good ventilation that had been promoted by Florence Nightingale and others. The hospital's basement was originally used as a mortuary, wine and beer cellar, dispensary and consulting and waiting room. For reasons of hygiene and to reduce fire risk, the inside walls of the building were partly lined with glazed tiles. The wards on the upper floors had large, south-facing bay windows to maximise sunlight. Considerable attention was given to the ventilation and heating of the building, and a self-acting suction power principle designed by Dr J. W. Hayward and Dr Drysdale, general practitioners in Liverpool, was adopted on the understanding at that time that good health was linked with good thermal comfort. In 1899 the operating theatre was enlarged and modernised. In 1903 an addition was built to the south west of the hospital to provide nurses accommodation, a washhouse and a laundry. This addition was connected to the hospital by a first floor glazed passage at the rear. During World War I the hospital was requisitioned by the War Office as an Auxiliary Military Hospital. In 1933 a new mortuary was built at the rear of the site to replace the original one in the basement. During World War II the hospital became part of the Emergency Medical Services. It came under state control in 1948 under the National Health Service Act of 1946, forming part of the South Liverpool Group of Hospitals, after which it was renamed the Liverpool Homeopathic Hospital, and in 1969 the Hahnemann Hospital. In 1972 it became part of The United Liverpool Hospitals, and was finally closed in 1976. In recent years the building has formed part of Liverpool John Moores University, with the former wards being used by the Liverpool School of Art and Design.

REASONS FOR DESIGNATION:
The Hahnemann Homeopathic Hospital and Dispensary is designated at Grade II for the following principal reasons:
* The building's design and use of good quality materials and workmanship mark it out as an architecturally accomplished C19 hospital building.
* Internally the building remains relatively unaltered with a surviving original plan form and numerous original features
* The building is still clearly readable as a former hospital
* It remains a very good example of a relatively rare specialist hospital type that was constructed at a time when homeopathic medical practice was at its peak of popularity.

* The building's design and use of good quality materials and workmanship mark it out as an architecturally accomplished C19 hospital building.
* Internally the building remains relatively unaltered with a surviving original plan form and numerous original features still in situ.
* The building is still clearly readable as a former hospital
* It remains a very good example of a relatively rare specialist hospital type that was constructed at a time when homeopathic medical practice was at its peak of popularity.