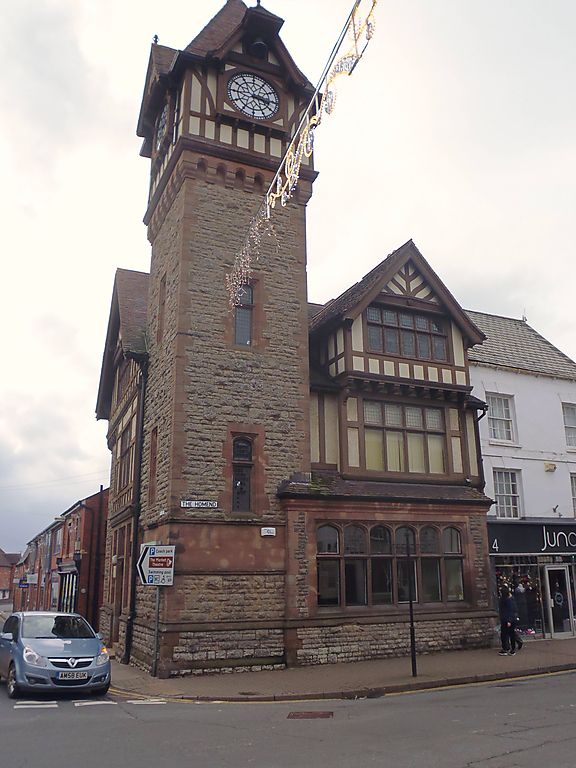 PLAN: Located on a corner plot, a square building with staircase contained in the clock tower occupying the eastern angle of the floor plan. The entrance is on the south front via a small hallway, with the clock tower staircase to the right and a small reading room to the left. The remainder of the ground floor is occupied by a large reading room. On the first floor are a number of smaller rooms, occupying the space above the entrance hall and small reading room, and two larger rooms above the main reading room. On the third floor there are three chambers located in gabled attics and a landing giving ladder access to the clock house.

EXTERIOR: The most prominent feature is the clock tower which occupies the north east angle of the building with a grey stone plinth and tower, red sandstone details including string courses and two two-light square headed stone mullioned windows. The clock, with chimes, is housed in a timber framed chamber with clock faces to the cardinal points. The tower has a short red plain tiled spire with gabled roofs over the clock faces, that facing onto the main (east) elevation includes a bell-cote.

East Elevation: on the ground floor is stone, with a six-light, square-headed stone mullioned window, largely glazed with stained glass. The first floor is timber framed and set back over a plain tiled jetty roof; it has a four-light mullioned window with stained glass to the upper lights. The third floor is a timber framed, jettied gable with a five-light square-headed, mullioned stained glass window. Red sandstone chimney stacks to far right. The west (rear) elevation is largely roughly tooled ashlar, with some timber framing to the upper part of the second floor with irregular, square headed, stone mullioned fenestration, those on the ground floor with four-centred arched tracery, timber framed dormer windows to the roof, and a central stone chimney stack.

INTERIOR: The entrance hall retains its simple green and brown glazed tiling, timber plank double doors and glazing. The clock tower retains the cantilevered stone staircase with plain wrought iron balusters and moulded hardwood handrail. There is a dedication tablet at the first floor landing. The reading rooms are well lit by banks of windows, some with coloured glass margins, and retain the original joinery including deep skirtings, fire surrounds, panelled doors, panelled wainscoting, and a reading bench to the front window. On the first floor the fireplaces and fire surrounds survive, as well as the doors, skirtings, etc. The third or attic floors have smaller chambers which retain their cast iron fireplaces and some early gas fires and remnants of gas light fixtures.

HISTORY: The Institute was built as a memorial to the local poet Elizabeth Barrett Browning to a competition winning design by Brightwen Binyon. It was opened in 1896 by Henry Rider Haggard, author of Alan Quartermain and King Solomon's Mine. The building was re-opened by the poet laureate John Masefield in 1938 as the public library.

SUMMARY OF IMPORTANCE:
The Barrett Browning Institute is designated at Grade II for the following principal reasons:

* It is by Brightwen Binyon, a well-known architect and Royal Academy exhibitor

* It survives well as a relatively complete example of a C19 Institute with little later alteration.

* As a memorial to the nationally important poet and writer Elizabeth Barrett Browning who lived close to Ledbury; the Institute has clear historical interest. This is enhanced by its later links with Henry Rider Haggard and John Masefield.

* It is by Brightwen Binyon, a well-known architect and Royal Academy exhibitor

* It survives well as a relatively complete example of a C19 Institute with little later alteration.

* As a memorial to the nationally important poet and writer Elizabeth Barrett Browning who lived close to Ledbury; the Institute has clear historical interest. This is enhanced by its later links with Henry Rider Haggard and John Masefield.