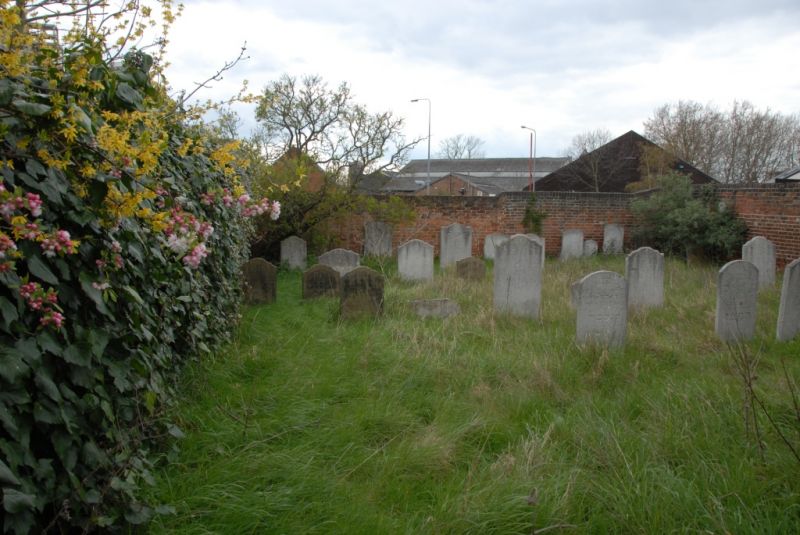 DESCRIPTION: The walls enclose the burial ground on four sides. Access is via an iron gate on the E side. There are two boundary marker stones set into the walls, said to date from the reign of George II. The marker on the exterior right side of the entrance gate is for St Clements Parish and the one in the internal left corner of the N wall is for St Mary Key. There is a buttress on the inner side of the N wall.

The burial ground contains 36 tombstones of limestone, marble and Yorkstone, including 3 smaller footstones. The stones are all upright and arranged in seven rows in largely chronological order, and have inscriptions in Hebrew or Hebrew and English. Two or three stones have broken at the top, and the inscriptions on a number of the stones are no longer legible due to weathering. The earliest dated tombstone is 1797/8 (Jewish year 5558), and the latest is 1850. The stones are dedicated to members of the Ipswich Jewish community and other Jews from Harwich (2), Bury St Edmunds, Colchester (3) and one from London. At least three of the stones are dedicated to children.

HISTORY: There was a Jewish community in Ipswich in the Middle Ages, but it dispersed when Edward I expelled the Jews from England in 1290. At Cromwell's invitation Jews returned to England in 1656 and settled in London. During the Jacobite Rebellions some Jews left London to establish trade in the port towns, Ipswich being one of these. By 1750 Ipswich had an established Jewish population, and they worshipped in a rented room. By 1792 the congregation numbered at least thirty families from Ipswich and the area and they were able to start building a synagogue on a site in Rope Lane (now Rope Walk, erected through the generosity of two benefactors, Simon Hyam and Lazarus Levi. Many members of the Ipswich congregation were shopkeepers and tradesmen, involved in the traditional occupations of garment selling and watch making.

Having built a synagogue, the community set about acquiring a cemetery. On 6 May 1796 they purchased a 999-year lease on an enclosed plot of land in the parish of St Clements from a bricklayer named Benjamin Blasby, for £28 and a peppercorn rent. The walls of the enclosure had been put up in at least 1764 and it was known as Rogers' Court after the then owner. Eight trustees were appointed for the cemetery, headed by Simon Hyam and Lazarus Levi, and including two Colchester residents. It is unknown how many burials took place in the cemetery, as there were evidently more graves than the number of tombstones. One of the burials was Sarah Lyon or Lyons, who died in 1808 at the age of 105. She was famous for her ripe old age and John Constable painted her portrait in 1804 when she was 101 years old. She was said to be the earliest Jewish settler in Ipswich in modern times.

By 1830 there were no more than fifty Jewish people in Ipswich and the synagogue was in poor repair. By 1867 it had fallen into disuse, and in 1877 it was pulled down. When Hermann Gollancz visited Ipswich in 1895, there were only three Jewish people still resident in the town. Twenty years later the Ipswich Jewish community was nothing but a memory. The burial ground was closed on 1 July 1855 under the Burial Act, and a Jewish plot was acquired in the municipal cemetery for future burials. After the closure the burial ground fell into disrepair, and by 1879 it was in a deplorable state, having been converted into a poultry yard and later a refuse dump. In 1893 the London Committee (now Board) of Deputies of British Jews took over responsibility for maintenance of the site. The Ohel (prayer hall) once attached to the burial ground had fallen into such a state of neglect that it had been claimed by a neighbour as his own property.

The Board of Deputies undertook a number of repairs to the brick walls in the late C19 and C20, including rebuilding the top of the north wall after a severe gale in 1895, and rebuildings of the west wall in 1912 and 1918. By 1912, the firm of R & W Pauls (later BOCM Pauls) owned all the land and buildings surrounding the burial ground. After WWII the adjoining tenements were demolished but the burial ground was preserved and maintained by BOCM Pauls for the Board of Deputies.

Four separate surveys have been made of the burial ground, recording the inscriptions on the tombstones and their locations: in 1875-1900 by Rev. Francis Haslewood, Anglican Rector of St Matthew's; in 1895 by Rev. Hermann Gollancz, a Jewish minister; in 1980 by Dr Nicholas de Lange and Sarah Montagu of University of Cambridge; and in 2001 by Alan Coleman of Suffolk College. None of the tombstones have been removed since the late C19 surveys.

REASONS FOR DESIGNATION DECISION:
The walls enclosing the Jews' Burial Ground in Ipswich are designated at Grade II, for the following principal reasons:
* The enclosed burial ground was acquired by the Jewish community of Ipswich in 1796, and the last burial was in 1850
* The walls were built c1764 and survive essentially intact
* The burial ground serves as an important reminder of the existence of a Jewish Community in Ipswich, which had been extinguished by the end of the C19
* There is special historic interest in the continuous settlement in England of this oldest non-Christian minority group and the tolerance afforded it by the local population.

The walls enclosing the Jews' Burial Ground in Ipswich are designated at Grade II, for the following principal reasons:
* The enclosed burial ground was acquired by the Jewish community of Ipswich in 1796, and the last burial was in 1850
* The walls were built c1764 and survive essentially intact
* The burial ground serves as an important reminder of the existence of a Jewish Community in Ipswich, which had been extinguished by the end of the C19
* There is special historic interest in the continuous settlement in England of this oldest non-Christian minority group and the tolerance afforded it by the local population.