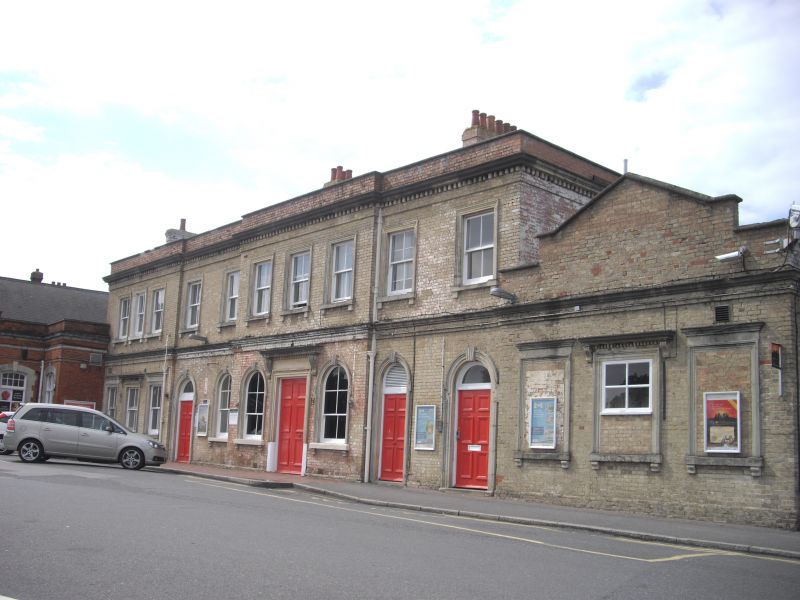 GV II
Railway station frontage buildings. 1859 by Sir William Tite for the Salisbury and Yeovil Railway Company. Altered and extended in 1902 to the designs of J.W. Jacomb-Hood for the London South Western Railway Company.

MATERIALS: The 1859 station building is of grey Fisherton brick (painted for much of the C20) with ashlar dressings and a slate roof with three brick ridge stacks. The 1902 attached range is built of red brick with dressings of brick and stone. The roof is clad in slate and has tall stacks with moulded caps.

PLAN: It comprises of two very distinctive elements: the original mid-C19 station and to the left (west) of this, the attached 1902 range; with a long sweeping platform to the rear (north).

EXTERIOR: The two buildings present a handsome frontage to South Western Road. The façade of the 1859 building (south) is a balanced composition of 3:2:3:2 with a moulded string course at first floor and a heavy modillion eaves cornice with plain brick parapet above. The principal entrance is located to the right of centre in a block of three bays that is brought forward, and the doorway is set under a cornice supported on consoles. A canopy to the central section was removed in the late C20. There are rounded-heads to most of the ground floor openings, except for the three left hand windows. To the first floor, the windows are square-headed and one, towards the left hand end, is a post-1902 insertion. There are three attached single storey blocks to the right which are of a similar date. The attached range of 1902 comprises, from right to left, of a two storey gable fronted entrance block, flanked by single storey, flat-roofed ranges. A canopy supported on decorative wrought iron brackets runs the width of the entrance block. A datestone in the gable, inscribed 1881, is considered to have been carved in error or has been re-used from elsewhere. To the left of the entrance is a single storey block with three windows under broad rounded-headed openings of rubbed bricks carried on brick pilasters. Beyond is a two storey, five window block with the same arrangement of round-headed windows to the ground floor and segmental-headed windows with a continuous cill band to the first floor. Two of the first floor openings are under small gables and have key stones to their lintels. At the left hand end of the range is a further two bay block, under a hipped roof, that breaks forward.

The platform (north) elevation of the mid-C19 building is in a similar style to its roadside façade with round-headed ground floor openings that have architrave surrounds to all but the principal entrance which is again set under a cornice supported on corbels. Its western elevation is largely concealed by the 1902 range, but has been partly rebuilt; probably when the adjacent range was added. To the right of the original station building are three tall round-headed openings that lead into the booking office of the 1902 range. The rest of the range has an asymmetrical arrangement of windows and doorways: segmental heads to the first five windows and moulded architrave surrounds to the doorways; three wide bays defined by ashlar pilasters with fluted mouldings to the lower part; two windows with round-headed surrounds of rubbed bricks carried on brick pilasters, a square-headed doorway and, at the right hand end, two blind openings again with rounded-headed surrounds. The platform awning is timber-clad and partly glazed; it retains its pierced timber barge boards. It is carried on cross-braced, riveted trusses that are set into the north wall of the frontage buildings and supported by cast iron columns with open foliage brackets. The platform continues beyond the west end of the buildings and here the canopy is carried on a double row of columns.

INTERIOR: The mid-C19 station building has been largely converted into office accommodation, and much of the ground floor houses electric signalling equipment. The 1902 range contains a double-height booking office with a coved cornice and exposed roof trusses carried on decorative corbels. The remaining rooms, including offices, refreshment and waiting rooms are unremarkable and are of lesser interest. The first floors of either building were not inspected.

The special interest is concentrated in the principal elevations, attached platform canopy, and the 1902 booking hall, as described above. The rest of the station complex, including the other platforms, their associated buildings and the underpass although forming part of the wider context, is not of special architectural or historic interest.
HISTORY: Salisbury was slow to share in Britain's railway mania and it was not until 1847 when a branch line of the London and South Western Railway (LSWR) from Southampton brought rail traffic to the city. This line terminated at Milford on the eastern outskirts of the city. Within ten years, a new line had been constructed via Andover, also as part of the LSWR, and terminating at Milford. Between 1856 and 1859 further railway lines arrived in Salisbury. The first of these, the Wiltshire, Somerset and Weymouth line was an off-shoot of the Great Western Railway and used a broad gauge track, and the trains terminated at a new station in Fisherton designed by Brunel, and part of which still survives (listed at Grade II). In 1857 a direct line to London via Andover was opened, also terminating at Milford. The most interesting of the Salisbury main lines was the Salisbury and Yeovil Railway Company who, in 1859, also built a station at Fisherton, adjacent to the existing Great Western terminus. A line to connect the Fisherton stations with Milford on the opposite side of the city was completed in time for the opening of the Salisbury and Yeovil Company's line. At about the same time a dramatic fire at Milford closed the station there to passenger services and the LSWR moved to the Salisbury and Yeovil Company's station at Fisherton. Following the extension of the Yeovil line to Exeter in 1860 and the conversion of the Warminster line from broad gauge to standard gauge in 1874; Salisbury now had the makings of an important railway junction, standing at the crossroads of two significant railway lines.

The new station at Fisherton was opened for public use in May 1859. The design of the station is attributed to the architect Sir William Tite (1798-1873) who was also responsible for a number of LSWR stations including Vauxhall (Nine Elms), Bishopstoke in Eastleigh, and the Southampton terminus. Following completion, Salisbury Station was described as `a most commodious building with a glass roof over the platform which is one of the longest in England'. It comprised a single through platform nearly 245m long and an Up bay platform that soon proved to be inadequate to meet demand. Between 1899 and 1902 the station was reconstructed and enlarged, including the addition of a new frontage range, alongside Tite's original station building, which is attributed to J.W. Jacomb-Hood, the LSWR's Chief Engineer. The configuration of the platforms was also altered to comprise two through platforms in each direction, plus Up and Down bay platforms, making six in all. In 1906, there was, however, a catastrophic accident when an express train collided with a milk train as it passed through the station. It was the worst rail disaster in the city's history with the loss of twenty eight lives. A further fatality occurred in 1930 when the painter, Christopher `Kit' Wood, died at the station.

REASON FOR DECISION: The frontage buildings at Salisbury Station are designated at Grade II for the following principal reasons:
* Good quality exterior treatment, both in materials and craftsmanship. The mid-C19 building is elegantly designed with Classical detailing, and an important work by a renowned railway architect; whilst the attached range of 1902 is a well-composed building in a loose Queen Anne Revival style and is a good example of the distinctive house style of the LSRW.
* Strong historical and visual group value with the adjacent Grade II listed former station designed by Isambard Kingdom Brunel
* Historic interest in the context of the development of the railways in the south of England since the mid-C19, and for the station's strategic location, which is known locally as the `Gateway to the West'

The frontage buildings at Salisbury Station have been designated at Grade II for the following principal reasons:
* Good quality exterior treatment, both in materials and craftsmanship: the mid-C19 building by Tite is elegantly designed with Classical detailing; whilst the attached range of 1902 is a well-composed building in a loose Queen Anne Revival style
* Strong historical and visual group value with the adjacent Grade II listed former station designed by Isambard Kingdom Brunel
* Historic interest in the context of the development of the railways in the south of England since the mid-C19, and for the station's strategic location, known locally as the 'Gateway to the West'