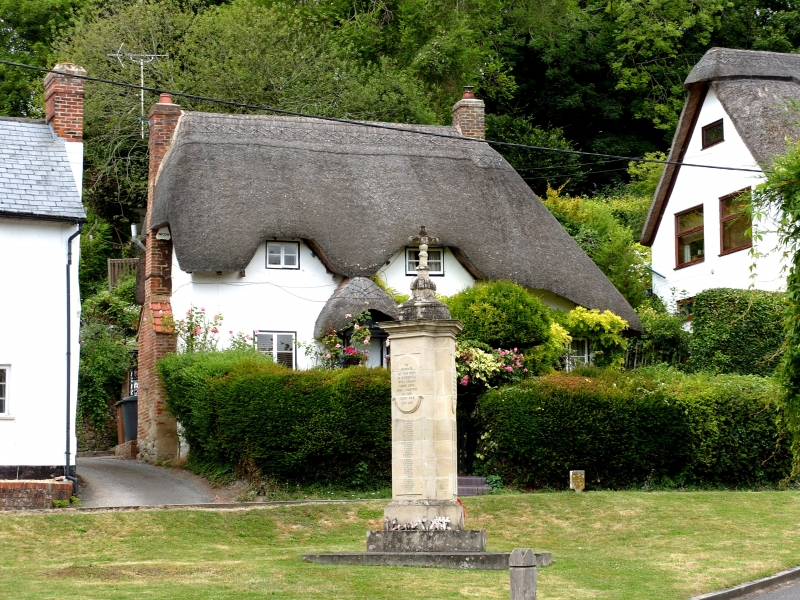 II
A war memorial of ashlar blocks, limestone and metal commemorating those fallen in war in two World Wars.

DESCRIPTION: The war memorial consists of a Neo-classical pillar or column at the junction of three roads so designed as to have one face to each of the three conjoining road directions. The polygonal (three faces with intervening cusps) limestone plinth sits on a circular foundation of limestone paving slabs. On this plinth sits the stone base, with moulded decoration, which bears a three-faced, polygonal column of ashlar stone blocks with inscriptions in an elegant typescript on moulded tablets on each face. On the tablet which faces south is the dedication, 'IN HONOUR OF THE MEN OF WHERWELL WHO SERVED THEIR KING AND COUNTRY IN THE GREAT WAR 1914 1918'; under which is a list of 35 names on blocks standing proud of the column, and one name below on the plane of the column. This dedication is repeated on the east side of the monument, with another 35 names on the blocks and two below. On the tablet on the west side is a cross under which is the dedication, 'IN GRATEFUL REMEMBRANCE OF THE MEN OF WHERWELL WHO GAVE THEIR LIVES IN THE GREAT WARS'; under which is 'FAITHFUL UNTO DEATH' with the dates 1914 and 1918 below and a list of 24 names on the blocks and two below. On the base of the column on this side are the dates 1939 and 1945 and six names below.
The column is topped by a plain frieze with beaded decoration dividing it from a moulded cornice above. Above the cornice is a small metal cross on a base of festooned and fluted decoration. The whole monument is about 4m high.

HISTORY: The memorial which was designed by the architect William Henry Ward (1865-1924) was unveiled on 19th September 1920 by Major General Sir Robert Wigham and was dedicated by local clergy and dignitaries.

REASONS FOR DESIGNATION:
* It is an elegant memorial of good quality workmanship and materials.
* It is an unusual design by a recognised architect.
* It is an eloquent witness to the impact of tragic world events on this community.