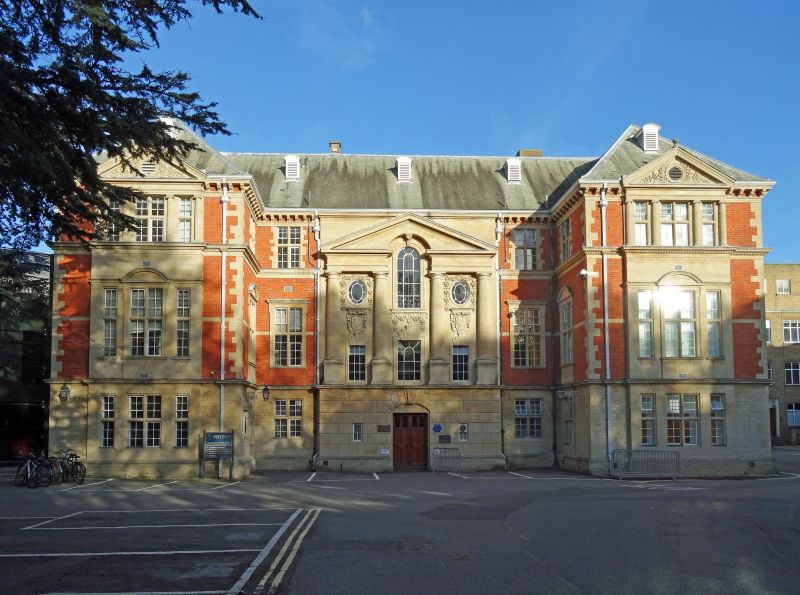 EXTERIOR: The building is in the English Renaissance style with well-detailed bright red-orange brickwork and ashlar stonework including the whole of the ground floor of the main façade. That, set back off Parks Road, is of three storeys with projecting wings either side of a five-bay centre. The central three bays of this comprise an ashlar centrepiece with attached columns and a pediment, with coats of arms of the University of Oxford and the Drapers' Company and heavy carved garlands below and around the second-floor windows. The wings, like the side bays of the central range with brick first and second floors over a stone ground floor, have slightly projecting ashlar central bays with four-light windows to either floor, those on the second with applied columns supporting pediments with carved laurel wreaths. To the left of the entrance, on the left-hand wing, a stone plaque with bronze oval inset records the Drapers' Company endowment of the building. The slate roof, hipped over the side wings, is pierced by very small dormer windows.

The Townsend Building was originally free-standing. It received an extension to the rear (east) in the 1960s (Simon Building), and is now abutted to the north by the Sir Martin Wood lecture theatre of 2000 which itself abuts the 1948 Clarendon Laboratory (not listed). This later extension is not of special interest.

INTERIOR: The central doorway leads into a hallway with stone detailing in a mixture of neo-Classical (arched openings) and late medieval (carved panels) styles. From this a double-height, stone double staircase rises the full height of the building through two storeys. The staircase is well-detailed through its full height with stone arches over its turns, decorative iron and stone screens to the side, and stone columns at its second-floor head supporting the ceiling with central octagonal dome. Some of the joinery, notably grand door cases in the C17 style, is also of high quality. A lecture theatre off the centre of the staircase which occupied the first and second floors has had a floor inserted across it and been subdivided into a laboratory and workrooms. At second floor is a doorcase into a room that has been infilled, but that has bases of riveted steel trusses still visible.

HISTORY: The Science Area, on the north-east fringe of Oxford, began to develop in the 1860s after the conservative university finally decided to institute an Honour School in Natural Science in 1850. At first buildings were annexes of the University Museum on Parks Road, but later gained independence.

The Townsend Building (or the Second Electrical Laboratory) stands towards the north edge of the Science Area, south of the Clarendon Laboratory. Built between 1908 and 1910 and funded by the Drapers' Company, it was designed by T G Jackson (1835-1924; created baronet 1913) who had made the Jacobean/English Renaissance style fashionable in Oxford in the 1870s to the extent that it was nicknamed 'Jacksonbethan' and 'Anglo-Jackson'. The building was completed in the year that he won the RIBA Gold Medal. It was the first of the detached buildings to break out of the Museum boundary and into the park beyond.

It was in this building that the experimental physicist H G J Moseley carried out experiments which established the ordering of the elements in terms of their atomic numbers which, it is thought, would have almost certainly have gained him a Nobel Prize, had he not been killed in 1915 at Gallipoli.

SUMMARY OF IMPORTANCE: The Townsend Building (or the Second Electrical Laboratory) stands towards the north edge of the Science Area. Of 1908-10, it was designed by T G Jackson, who pioneered the study and revival of English Renaissance architecture and who had made the Jacobean/English Renaissance style fashionable in Oxford in the 1870s. With the adoption of the William and Mary to Queen Anne style for the Townsend Building in 1908 Jackson was moving with the times, and created a building whose façade in contrasting very red brick and ashlar is heavily detailed and deliberately decorative. It was here that the experimental physicist H G J Moseley carried out experiments which established the ordering of the elements in terms of their atomic numbers, which, it is thought, would have almost certainly have gained him a Nobel Prize, had he not been killed in 1915 at Gallipoli.