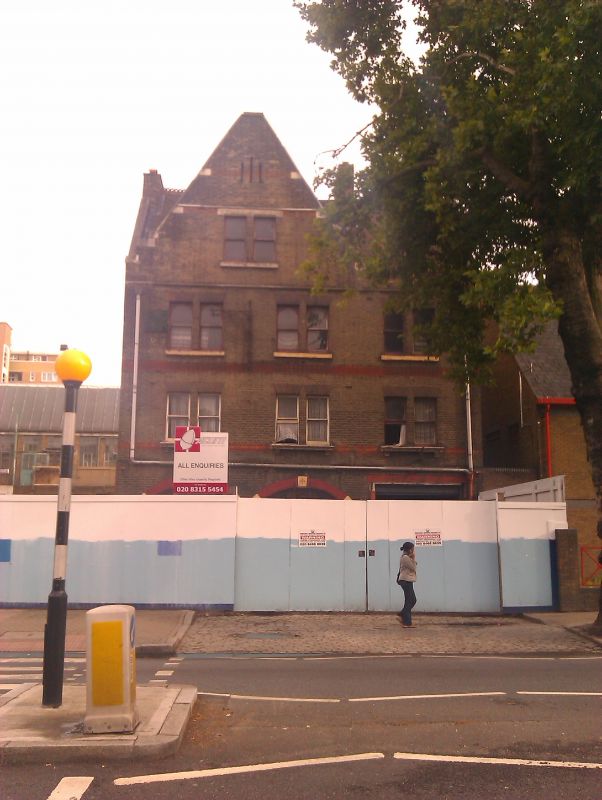 EXTERIOR: The former fire station on Peckham Road is stock brick building in the Gothic style, of a three storeys plus an attic, with a pitched tiled roof and gabled cross-wing. The elevation to Peckham Road has three bays, the ground floor with a vehicular bay to the right and two segmental-arched former appliance bays to the left. These have been partly bricked in but are identifiable as former appliance bays and retain their gauged brick arches and keystones and imposts decorated with fleur-de-lis. The elevation is enlivened by bands of red and yellow brick and of patterned terracotta; the gauged flat arches to the pairs of timber sash windows on the upper storeys are also in red brick. The apex of the gable, which formerly carried a finial, has been removed. A decorative wrought-iron bracket is located in the centre of the elevation; this may have held a fire lamp, although historic photographs show that the fire lamp was originally in a different position.

The rear of the building has fewer coloured brick bands and the red rubbed brick window arches here are segmental; most of the timber sashes have been replaced, probably in the first half of the C20, with metal casement windows. One of the first floor openings is a loading bay and this leads to a taking-in area complete with hoist. This may relate to the possible use of the building as a warehouse after it ceased to be a fire station. Smaller outbuildings, including stables, shown in the rear yard on historic maps no longer exist.

INTERIOR: the original arrangement of rooms survives on the upper floors along with an iron ladder to the loft; the appliance bay and vehicular entrance have not been subdivided. Most of the doors and the staircase are of some age, though it is not clear if these are the originals. As is common in historic fire stations, there are no original fireplaces or equipment relating to the fire brigade.

HISTORY: Fire services in London emerged in the period after the Great Fire of 1666, principally from the need for insurance providers to limit their losses through damage to buildings and property. Initially each insurer maintained a separate brigade that only served subscribers until the foundation of an integrated service in 1833, funded by City businesses. In 1866, following an Act of Parliament of the previous year, the first publicly-funded authority charged with saving lives and protecting buildings from fire was founded, the Metropolitan Fire Brigade. Under its first Captain, Eyre Massey Shaw, the Brigade undertook an ambitious expansion programme, building new stations and converting older buildings, to serve the large metropolitan area covered by the Act.

Camberwell Fire Station, as this building was originally called, was built in 1867 and is the earliest surviving purpose-built fire station in London. In addition, given the Metropolitan Fire Brigade was in the vanguard of developments in fire protection in England, there is a strong possibility it is one of the earliest in the country too. There are a small number of surviving fire engine sheds dating from the first half of the C19: simple, single cell buildings were designed to house a fire pump and built by local vestries or by public subscriptions. The Metropolitan Fire Brigade stations are of a different order: publicly-funded, multi-storey buildings designed to provide accommodation for the newly-created fire brigade officers and to house engines, horses and equipment. The architect for the Fire Brigade in this period was Edward Cresy Junior, the first person to hold the post. Cresy died in 1870 by which time a fire station-type of identifiable, landmark building had emerged from the previous practice of adapting or emulating domestic buildings. Camberwell Fire Station was constructed at the same time as a station at Westminster which has since been demolished.

The station was used by the London Fire Brigade until the 1920s when a new building was constructed nearby. In turn, this was demolished in the late C20 to make way for the third building in the area built for the purposes of fire prevention, which is still in use.

REASONS FOR DESIGNATION: The former Camberwell Fire Station is listed at Grade II for the following principal reasons:
* special architectural and historic interest as the earliest surviving purpose-built fire station in London, if not nationally, designed in the Gothic-style with a degree of civic character which distinguishes it from contemporary stations that were adapted older buildings;
* the functions of the newly-founded Metropolitan Fire Brigade are readable in the architecture of the building, in particular the appliance bays and accommodation on the upper storeys.