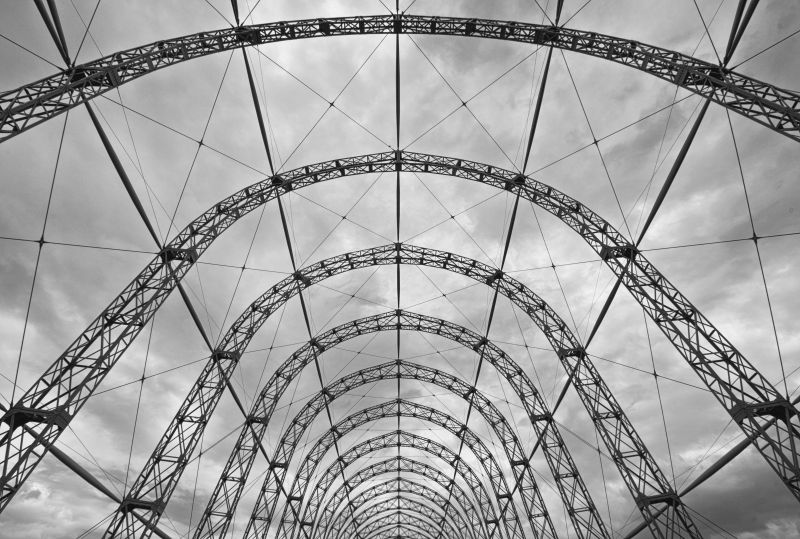 Portable airship shed built in 1912; the frame reassembled in this location in 2004.

MATERIALS:
The shed is constructed of a lattice steel frame with its members riveted together with steel pins and stabilised with steel wire ropes.

DESCRIPTION:
The shed is aligned east-west, and is constructed of fourteen trusses, each made up of eight frame members bolted together. Each frame member consists of a box section made up of riveted angles and flats, bolted together to form a curved or approximate catenary arch springing from the ground. Of the original 112 lattice steel frame members 108 have been reused, with four replacement members on the two east end trusses. Steel purlins join the adjacent trusses together along the pinnacle of the arch, and at three points down the side of each truss. A network of steel wire ropes attached to the ground give stability; with attachments where the purlins meet each frame member. Only two trusses were replaced, the remainder are original, but there are some replacement rivets.

The structure has been hot zinc sprayed for protection then given a five stage paint process. The top has been treated against damp pools forming, and has been spiked to prevent birds from alighting. It will eventually have a mesh anti-climbing screen. There are some lightening conductor straps attached to the frame.

SUBSIDIARY FEATURES:
Each truss sits on a plinth constructed from reinforced concrete with cement and pebble dash cladding. The plinths are piled and stand to 0.55m high raising the trusses from the floor.

HISTORY:
Balloons were used as observation platforms during the Napoleonic Wars and in the American Civil War. In 1879 the Royal Engineers formed a Balloon Equipment Store at Woolwich Arsenal. It was moved to the School of Military Engineering, Chatham in 1882, and in 1886 the Balloon School was transferred to Linsing near Chatham. In 1890 the Balloon Section was relocated to South Farnborough and in 1905 the Balloon factory, composed of the operational and training units, moved to its final site at south Farnborough. A number of permanent dirigible sheds were constructed at Farnborough in order to accommodate a range of airships. In 1906 shed 'B' was built (demolished 1965); shed 'A' was completed in June 1910 and in October of that year the War Office announced that £28,000 was allocated for the construction of a new large airship shed, shed 'C' which started to be erected in 1912 (both 'A' and 'C' were moved to Kingsnorth and demolished c1930).

Early in 1912 the army began to test portable sheds which would allow airships, with their necessary supplementary gear, to be deployed on operations as necessary. The portable airship shed, was under construction at Farnborough in March 1912 at a cost of £850. It was designed to be big enough to accommodate a similar range of airships (Gamma, Eta, Beta and possibly Delta) to sheds 'A', 'B', and 'C'. In order to test the portable shed with dirigibles the Aldershot Chief Engineer (later Sir) G Scott-Moncrieff suggested that it be taken to the Central Flying School at Upavon as space at Farnborough was limited due to the erection of RAF and RFC sheds there at that time. The canvas for the portable airship shed was undergoing repair until June 1912 and in October 1913 a potential site was found at Tidworth Pennings, Wiltshire, for testing the shed. However, all action regarding the provision for accommodation for the airship squadron came into abeyance at the end of October and it is thought that the project was abandoned. After October 1913 the portable airship shed was dismantled and held in storage. It might have been intended to re-erect it in Wiltshire or at the RAF Farnborough site, but the result was that the shed was divided into two parts and formed part of the structure for two separate buildings on the factory site at Farnborough. The lower part of the frame became building Q65 (to become the fabric workshop) erected in 1916-17, and the upper became building R51 (to become the forge and foundry) erected in 1914. At the beginning of the First World War Britain had very few rigid (i.e. those with a hull framework) and non-rigid airships, and only six airship sheds, but the threat posed by German submarines made the Government realise that it needed to address the problem, and by the end of the war 61 airship sheds had been constructed. Of these, only three, apart from the portable shed at Farnborough, have been identified and designated. These are the roof of the former airship shed relocated to Moat Farm, St Mary Hoo, Kent (Grade II) and the No.1 and No.2 sheds at Cardington built in 1916-17 and 1928 respectively (both Grade II*): the latter are the only in situ examples, ranking in a global context with Ecausseville (1918) in France and other inter-war examples in the United States.The 'Y' hangar at Chalais Meudon north of Paris, erected in 1879 from a shed built the year earlier for the Paris Exhibition, is the earliest surviving airship hangar in the world.

Farnborough is one of the key sites in the world relating to the development of aviation, testament to the close involvement of state governments in support for aviation technology and its application to military uses. Its closest comparable site in a European context is Chalais Meudon in France, where a variety of buildings - including an airship hangar of 1879 (the earliest in the world) and wind tunnels - have survived, and the Adlershof research and development centre at Johannisthal to the east of Berlin. The survival of the airship sheds at Farnborough and Cardington are of importance and rarity in a European context, particularly in view of the lack of survivals in Germany, which led the field in this technology.