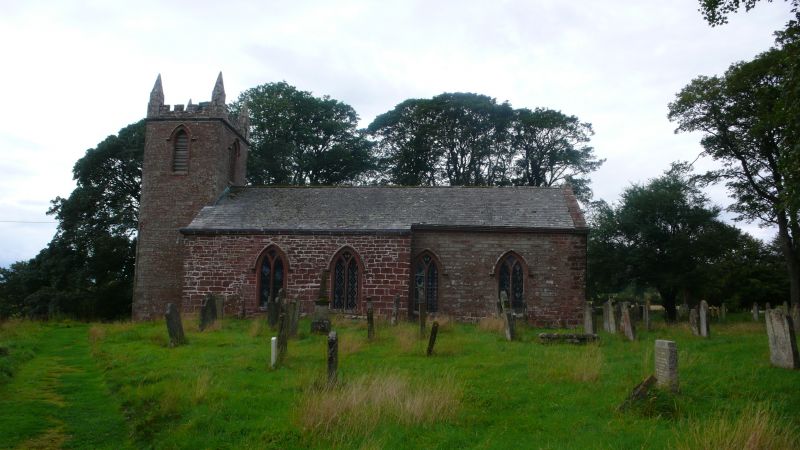 II
A medieval church rebuilt in 1784 to an architectural style loosely `Gothick' in form with stained glass by Faucet of Appleby, restored internally in 1853 and repaired in 1946.

MATERIALS: Red sandstone with dressings of the same beneath pitched slate roofs.

PLAN: The church is sub-rectangular with a chancel at the east end, central nave, square tower and gallery stair at the west end, and a vestry attached to the north wall of the chancel.

EXTERIOR: All windows have pointed arches beneath hoodmoulds. The chancel east elevation has a stone mullioned window with three lights and intersecting tracery. There is a smaller blocked rectangular window to its right. At the apex of the roof a square plinth supports a carved round finial with circular holes in the form of a cross bored through it. There are three windows to the north elevation and four to the south, each stone mullioned with two lights and Y-tracery. The south elevation has a reset carved Roman or Anglo-Saxon figure in a round-headed panel towards its east end, and traces of a blocked early doorway beneath and adjacent to its west window. There is a tapered carved coffin lid of possible C13th date depicting an ornamental cross on a stepped base, a sword, an arrow and bow reset in the west return. The north elevation has a blocked round-arched window towards its west end. A vestry attached to the north elevation has a timber door beneath a segmental arch and hood moulding at its junction with the chancel wall and a single light window in the opposite wall. The west tower is square in plan with entrance through timber double doors beneath a pointed arch and hoodmould. The belfry has matching pointed arched openings beneath hoodmoulds. The tower is finished by a continuous dripmould above which is a parapet with crenellations and corner pinnacles topped by spirelets. There is a stair tower with a single-light window attached to the north elevation of the tower.

INTERIOR: Stairs lead up from the vestibule to a small carved timber-fronted gallery supported on slender iron columns either side of the nave's central aisle. The chancel east window has stained glass of intersecting design in yellow with red highlights and a simple chancel timber rail. All but one of the windows in the north and south walls has lozenge-patterned stained glass in strong primary colours. The walls are plastered while the roof is canted with thin stucco panelling that interlocks above the chancel. The carved timber pews and choir stall were installed in 1853 but the choir stalls may be re-aligned pews. The pulpit, president's desk and simple concrete font appear to be later. There are carved and inscribed memorials to either side of the chancel east window and on the nave's north and south walls.

HISTORY: Reused masonry including round window heads and now obscured chevron-ornament within the building suggests the presence of a C12th church here. A tablet in the chancel indicates that the current church was rebuilt in 1784 and the north wall, west tower, windows and stained glass are considered to date to this period. The window glass is by Faucet of Appleby. The church's interior was restored in 1853 when the pews and choir stalls were installed and the current ceiling form created. The pulpit, president's desk and font are thought to have been added later. In 1946 the roof and east end of the church were repaired. The organ was donated in 1979.

REASONS FOR DESIGNATION:
St Cuthbert's Church is designated at Grade II for the following principal reasons:
* It is a good example of a late C18th church that retains elements of its original medieval fabric
* Its late C18th design and rebuilding has produced a structure that is both simple yet architecturally imposing in stature
* The building's original medieval tradition of competently using good quality local materials in its construction has continued during rebuilding and repairs undertaken during the last three centuries
* The church is a prominent feature within the local landscape, its setting enhanced by its slightly elevated position and dramatic backdrop of towering fells.