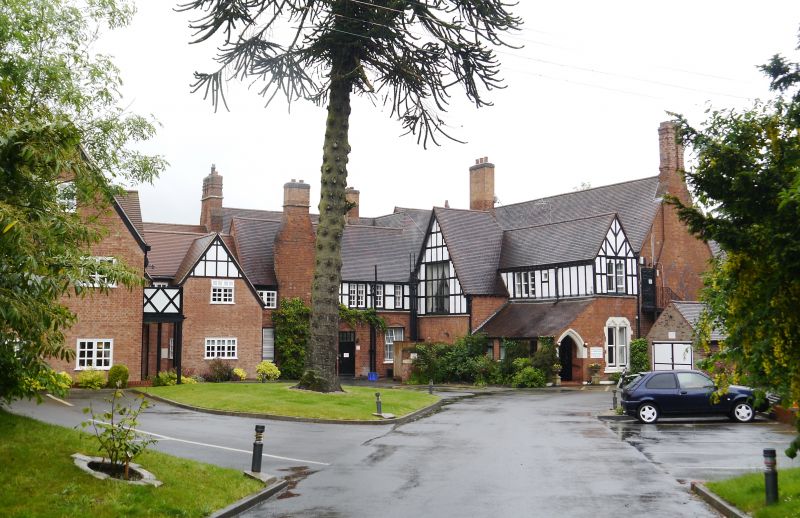 GV II
Nursing home, formerly rectory. 1855-6. William Butterfield for Archdeacon Sandford. Red, English-bond brick with stone dressings and timber framing with a steep, plain-tiled roof. Two storeys with an L-shaped plan which has a lengthy service wing extending to the north. The south, garden front has brick walling to the ground floor with trellis diapering and stone dressings and timber framing at first floor level with three timber-framed gables which have decorative bargeboards. To right of centre is a canted bay with sash windows set in stone surrounds which have trefoil heads. At either side are similar lancet lights and at left is a garden door. At far right and left are projecting gabled wings. That at right has two pairs of sashed lancets divided by a squat buttress and a shield-shaped datestone which reads "JOHN SANDFORD B.D./RECTOR/1856". Above this is a gabled oriel which rises into the gable. The left wing has a 2-storey canted bay window. Adjacent to the two lateral wings are small C20 casements. The other first floor windows are all sashes with trefoil heads. The east front has a slightly-projecting gabled wing at near centre with an oriel to the first floor supported on a central buttress. This has a large arched chapel window which has been partially altered. To its left is a chimney stack with diapering with an inserted C20 window and there are further inserted casements to both floors at right. The chapel gable marks a dividing point between the taller house at left and the lower servants' wing at right which has a varied pitch to its roof. The rear of the house has a projecting gabled wing at left with small-framing to the first floor and a large staircase window whose glazing bars continue the pattern of the framing. At right is the lean-to porch. Several chimney stacks have been shortened.
Interior: The interior has been altered by the subdivision of several of the rooms into bedrooms with adjoining bathrooms and corridors, however, the majority of these divisions are stud walls which could be removed with relative ease. At ground floor level the principal features can still be read and the plan is largely intact with library, ante-room, drawing room and dining room arranged along the south front and with interconnecting doors. The entrance porch and entrance hall are largely unaltered, as is the panelled, spinal corridor with the principal staircase leading off. The library and dining room have been subdivided and their fireplaces removed but the drawing room and its ante-room are mostly in their original condition with arched alcoves and tracery roundels in the panelling. In the servants' area the backstairs are in situ and the housekeeper's room has been converted to the kitchen. At the north end the single-storey block for the laundry, scullery and dairy have been demolished, as [very recently] has been the coal store. At first floor level the former chapel retains its impressive double doors with elaborate strap hinges facing the top of the staircase, but the interior has been subdivided and the fenestration altered. The staircase and the first floor landing area show considerable finesse in the treatment of the pierced screen between the staircase and the ground floor hall, the handling of different levels and the detailing with a wooden arcade at first floor level above the balustrade.
There is strong group value with the Church of St. Laurence [grade II], the nave and chancel of which were largely rebuilt by Butterfield and the Windsor Memorial Cross [grade II] in the churchyard.
This is a large and important rectory designed by William Butterfield in 1855 which marks a significant development in his stylistic evolution. The design proved influential, not least upon Philip Webb who followed the arrangement of the plan and several of the details when designing the Red House, Bexleyheath for William Morris.