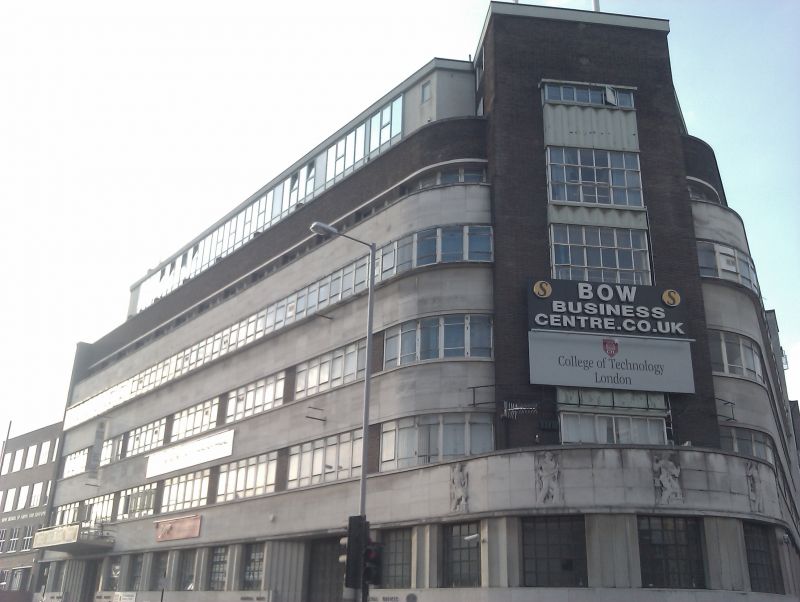 EXTERIOR: The building occupies the corner of Bow Road and Fairfield Road which meet at an acute angle. The five-storey steel-framed building has reinforced concrete walls faced with bands of Portland stone between the long rows of horizontal windows with metal frames and un-moulded surrounds; the ground floor plinth is clad in pre-cast terrazzo, supposed to facilitate the cleaning necessary 'in view of the fume and smoke-laden atmosphere of Poplar', above this are panels of green Swedish marble; the fourth floor and tower are faced in brick. The corner site is exploited in the way the elevation curves around the acute angle at ground floor level like a ship's prow with a low square tower set back behind it. Along the prow are five stone panels carved by David Evans. They depict the workers employed to build the town hall, including a welder, a labourer, a mason, a carpenter and an architect; the latter is in the central panel and is signed by Evans. Evans is reported as having made sketches from life as work was going on in the Illustrated London News of December 1938. The subject and methods are unusual, and characteristic of the social aspirations of the Borough of Poplar. As an alderman explained at the opening ceremony: 'I believe that the future welfare of the common people is bound up with the development of a social conscience which will see not only in the work of high and mighty but in the labours of road menders and sweepers, social builders and engineers, miners and sailors.' The square tower, with its large vertical opening containing windows and cast lead panels, rises above the sculpted panels. An attic storey was added in the late 1990s and is not of special interest. The assembly hall, which was originally further down Fairfield Road, has been replaced with a block of flats.

There are three entrances, to the former assembly hall (on Fairfield Road), to the municipal offices and for councillors (both on Bow Road). The former has been altered, although the low staircase tower above it survives, but the Bow Road porticoes are unchanged. These retain their heavy cast-bronze coffered doors, bronze lettering recalling the original functions, letter box, and green Swedish marble-clad reveals. The councillors' entrance has a cantilevered concrete canopy balcony originally designed for councillors to give speeches from. It is decorated by ceramic mosaics, also by David Evans, the underside illustrating the industries of Poplar and the River Thames; the balcony front bears the arms of the Borough and child figures symbolising Art, Science, Music and Literature. All the windows are original, including the bronze paned windows on the ground floor.

INTERIOR: There have been losses to the historic fabric of the building. Two of the principal areas of activity, the assembly hall and council chamber were demolished in the late 1990s. The mayor's parlour has been altered beyond recognition and is now a café; an excellent painted panel depicting a birds-eye view of Poplar and its historic buildings that was once here is reportedly in storage. The other main areas survive well, but the fittings are quite plain. The floorplans, with rooms accessed via spinal corridors with staircases at each end, are largely unaltered. The principal areas of interest include: foyer with stone floor, marble walls (hidden behind later studwork walls) and bronze lettering announcing various rooms; gentlemen councillors' room with walnut panelling, wood-block flooring, doors and skylight; lady councillors' room with mahogany panelling and woodblock floors; committee rooms with coffered doors, partitions and potentially original panelling beneath later studwork; two offices containing original panelling, doors and patterned glass; concrete staircases with terrazzo surfaces; ground floor circulation corridor with marble walls with fluted cornice; and upper floor corridors with oak-block floors. Also in the possession of the building, although not currently fixed to any wall, is a plaque from 1922 commemorating the Borough as 'the great mother of common life and weal', moved here from an older municipal building. A sand-blasted and etched glass screen which was formerly in the assembly hall has been resited in the foyer. It is by WD Suddaby and CE Fryer and depicts Father Thames and the emblems of the three parishes of Poplar.

HISTORY: The commission was originally given to Culpin & Bowers, an architectural practice with experience of building town halls and the socialist credentials preferred by the Council. The partnership dissolved before construction began, however, and Ewart Culpin and his son Clifford took over the job. They dramatically revised plans for a classical-style town hall drawn up by Bowers.

Poplar Borough Council between the Wars is one of the most famous councils in the history of local government, giving rise to the political practice of 'Poplarism' and playing an important role in the development of the Labour Party in the C20. The local election of 1919 was the first time the Labour Party won significant numbers of seats, becoming the largest party in twelve of the twenty-eight London boroughs. Nowhere was this breakthrough more pronounced than Poplar where they won 39 of 42 seats. George Lansbury became the first Labour mayor of Poplar at this time, was local MP from 1922-1940, and leader of the Labour Party from 1931-1935.

The defining episode in the Poplar story was in 1921 when the Council withheld rates revenue raised to pay for the Metropolitan Police, the LCC and other cross-London authorities, and devoted the money to a programme of social reform and poor relief, including equal pay for men and women and a minimum wage for Council workers, far in excess of the market rate. Thirty councillors, including six women, were jailed indefinitely for refusing a court order to remit the monies, the men in Brixton Prison where they continued to hold meetings and the women in Holloway. After a popular outcry, the councillors were released and rates for rich and poor boroughs were equalised as an Act was rushed through Parliament in the closing months of 1921. The phrase 'Poplarism' has been used since to describe local authorities who challenge central or national governments or the policy of providing relief for the poor at generous levels. Although the radical socialism of Poplar Borough Council never became part of mainstream politics, many of the Council's reforms have since been enacted nationwide such as equal pay for men and women (in 1970) and a national minimum wage (1999).

This dramatic incident had an impact on the design of the Town Hall commissioned by the Council over a decade later. The building was funded by a loan from the Ministry of Health and the LCC, on the basis that consolidating all council services in a single building would improve efficiency, and it was considered insupportable that money should be lavished on a grand expression of municipal pride, as was common in town hall architecture of the era. Culpin recounted the details of the commission at the laying of the foundation stone in 1937: 'there was to be no extraneous ornament on the building, that by its mass and proportions and by its flowing lines it should stand or fall, and I am bold enough to say that this is the first town hall in this country to be erected in the modern style'. The proposed design was criticised for its austerity, however. Alderman Key, at the opening ceremony a year later, answered the detractors: '[if] the building were in reality a super factory transferred from Slough or the Great West Road ... what of it? In so far as a factory was a place where worthily by the work of man's head and hands the desires of his heart could be made living and fruitful that was what they wanted ... this should have been a veritable palace of the people had not Poplar been so poor, but here it is, a worthy workshop for the worker's welfare.' The building was celebrated in its day for architectural interest. 'One of the most remarkable town hall buildings of recent times' said Architectural Design and Construction, and The Builder devoted five illustrated pages to its design, the Architect and Building News nine. It also made an impact in the popular press: the Star on August 24 1937 asked 'Ought a Town Hall to look like a factory, a workshop? Poplar's is the first in this land to provoke the question.' At the laying of the foundation stone, the hope was expressed that they 'not only lay the foundation stone of the new Town Hall but better still the keystone of Poplarism.' George Lansbury, a central figure in the history of the Labour Party, presided at the opening ceremony of the new town hall. For the architects of the building and the councillors, the new town hall was a manifestation of the Borough's ethos and activities, the culmination of what they saw as a decade of progress.

While the new town hall might have lacked classical embellishment, it was not short of artworks, most notably five bas-relief panels along the prow of the building and a mosaic canopy over the member's entrance. The artist of both pieces was David Evans (1893-1959) who exhibited at the Royal Academy from 1921 and was sculptor in residence at the Cranbrook Foundation, Michigan (a Mid-Western version of Devon's Dartington Hall) in 1929, executing important commissions in New York during this time. Back in Britain, his work included the frieze on Wandsworth Town Hall (Grade II), a sculpture entitled 'Dawn' for Welwyn Garden City and (after WWII) the replacement Gog and Magog in the Guildhall which had been destroyed in the Blitz as well as these five panels and the mosaic canopy at Poplar Town Hall. He was a member of the Royal Society of British Sculptors.

REASONS FOR DESIGNATION: Poplar Town Hall is listed for the following principal reasons:
* special architectural interest as the first town hall built on pure modern lines, designed by the noted architects Culpin & Son, with continuous bands of glazing and a curved bow front;
* good quality materials including brick, terrazzo, green Swedish marble and stone with bronze doors, fixed lettering, and windows;
* significant artworks that testify to the aspirations of the Borough of Poplar in the interwar years including a remarkable set of bas-relief panels by David Evans;
* special historic interest for the connection with the interwar Poplar Borough Council, one of the most famous in the history of C20 British politics and local government, and the trailblazers of some aspects of post-war welfare reform.