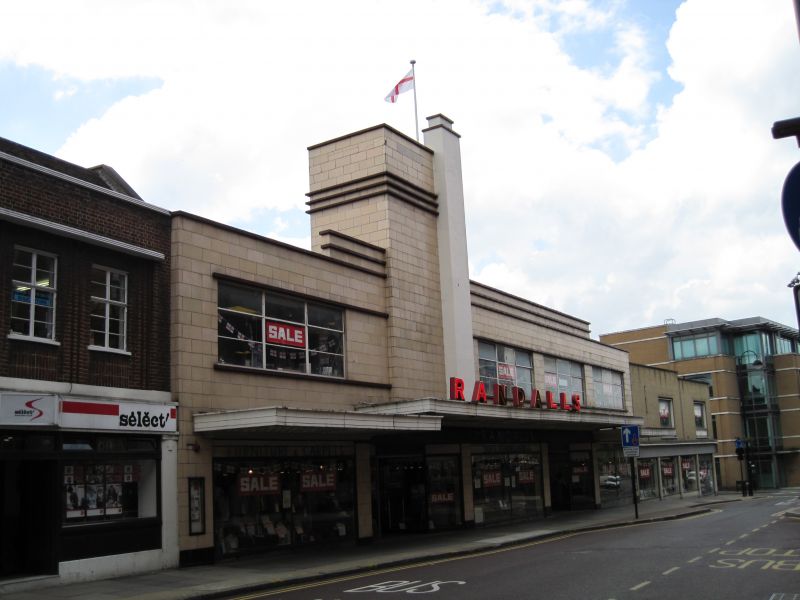 PLAN: The shop entrance is recessed, flanked by long display windows and fronted by an island display case. The shop itself is on two storeys, with open shop floors on both levels occupying the greater part of the building space, with offices and delivery bay to the rear.

EXTERIOR: In the main north (shopping Street)elevation the strong horizontal, emphasised by bands of brown Carraraware, is broken by the vertical of a square tower with flagstaff to the east of the central section. The tower has a projecting rectangular double turret on its north-west corner and raised decorative bands of brown Carraraware. The off-centre fin to the tower originally mounted a projecting square clock, now gone. The canopy projecting over the pavement at ground floor level is broken into three sections, the central section slightly higher, and this is echoed in the narrow banded pediment crowning the façade. All three sections of the canopy are pierced by six rows of small circular glazed lights. Above the canopy is the name of the store in bright red neon lit lettering. Below the canopy, in white letters on a black background, the store name is repeated, while the goods sold are itemised in similar lettering above the display windows. The store name is also set into the terrazzo paving of the entrance, and there are small bronze roundels containing the letter R set at regular intervals along the black marble plinth below the display windows.

The ground floor presents itself as an almost continuous run of plate glass windows set in fluted bronze frames, and features the recessed shop front with island display case, a popular commercial feature between 1900 and 1939. Behind the island display case are three plate glass windows which separate the two glazed double doors to the main entrance to the store: the display cases then project forward on either side of the central island. In the first floor are four long metal framed windows. The west end of the building is an extension built in the 1960s which is not of special interest.

At the back of the store are a range of single-storey buildings set around two sides of a yard. These are joined to the east end of the store's rear elevation and are very modest and utilitarian. There are two sliding garage doors, one to the east and one to the south, and narrow metal framed windows.

INTERIOR: The interior is fairly modest and traditional in contrast to the facade. It is divided into showroom and offices, the former a continuous open space broken only by square pillars at regular intervals, some with small cast iron radiators grouped around them. The showroom is open to the 1960s extension, although the division between the two is clear. The ceilings are modern. The back wall of the showroom is irregular and has a central recessed bay with doors on either side to offices and store rooms respectively: to the west of this bay is the open cash office, the focal point of the pneumatic tube cash system which still remains in place, although no longer in use.

The stairs to the first floor are set in a recessed bay at the back of the showroom directly opposite the east entrance doors. These are wood panelled with square newel posts, and rise as a single flight to mezzanine level, dividing to rise as a double dog-leg to the first floor. All doors are original, plain wood with moulded wooden architraves.

HISTORY: Until the late C19 Uxbridge was the economic and social focus of the otherwise largely rural parish of Hillingdon, and remained so even after the extensive urbanisation of the parish in the late C19 and early C20, becoming a business centre for a much wider area in the first half of the C20. The growth of suburbia and the expanding market for domestic appliances, furnishings and other consumer goods was the context for the founding of Randalls, a family firm established in the late C19. In 1938 the shop was rebuilt as a furniture store which also sold soft furnishings, carpets and kitchenware. The new shop was designed by William L Eves, an Uxbridge architect who had succeeded his father, George Eves as surveyor for the Allen Estate in Kensington; William was responsible for the design of Ilchester Mansions, Earls Court, and for remodeling the frontage of the estate's properties on Kensington High Street between 1894 and 1935. William Eves has no listed buildings to his credit. Randalls new shop survives largely unaltered; although it was extended to the west in the 1960s, apart from the removal of the west wall in order to open the space to the '60s extension, the interior remains largely unchanged except for some minor alterations which include the insertion of lower ceilings: the only loss to the building has been the clock which projected from a vertical fin on the tower.

* Of special architectural interest for its strong Modernist design;
* For its remarkably intact example of a shop front from the late 1930s built in the Modernist style and including a rarely surviving island display case;
* Its interior detail, while quite plain, survives well and includes the cash desk and pneumatic tubes; the functional detail of the delivery area to the rear also remains in place.

Randalls Department Store is designated at Grade II for the following principal reasons:
* It is of special architectural interest for its strong Modernist design.
* It is a remarkably intact example of a shop front from the late 1930s built in the Modernist style and includes a rarely surviving island display case.
* Interior detail, while quite plain, survives well and includes the cash desk and pneumatic tubes; the functional detail of delivery area to the rear also remains.