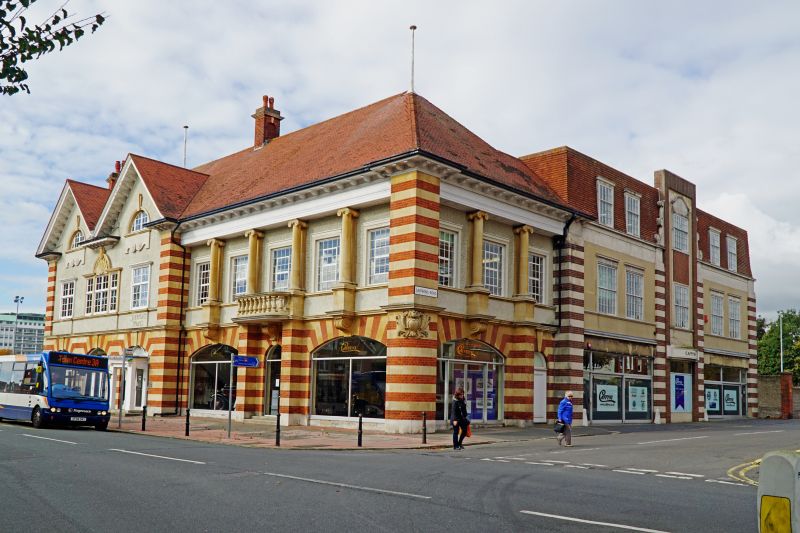 GV II
Motor car garage and showroom, with assembly rooms and offices above, 1911 by H Woolnough of Eastbourne. Later alterations, including a sympathetic 1950s addition to the Saffrons Road frontage which, while characterful, is not of special interest.

EXTERIOR: The building occupies a prominent site, opposite the magnificent Grade II listed Eastbourne Town Hall of 1884-86 by W Tadman-Faulkes and on the corner of Meads Road and Saffrons Road. This central location, with the bowling green, football and cricket pitches nearby too, perhaps encouraged the Caffyn brothers to include assembly rooms for hire in their new garage building, an otherwise unusual functional pairing.

The red brick building, with stone banding and other dressings and a hipped tile roof, has two principal facades, facing the two streets. To Meads Road, the brick and stone-banded ground floor contains arched openings of various sizes, which serve (as they did originally) to display cars for sale. The window glass and frames are modern but the openings are unaltered from the original configuration. Above this to the left are the former Saffron Rooms, advertised in the original Arts and Crafts lettering on the facade. This part of the elevation advances beneath two cross-gables with deep eaves and has red brick and stone banded pilasters to the corners. The upper floor is rendered in rough-cast and has a central Venetian window with a shell decoration in the tympanum and there are two Diocletian windows in the gable above, these with decorative aprons and keystones. In the part of the Meads Road elevation to the right, the first floor is articulated by a detached order of stone Ionic columns under a plain frieze and a console bracket cornice; there is a balconette with urn balustrade to the central window. Historic photographs show that the original windows were oeils-de-boeuf draped with garlands of foliage detailing, in the style of those at Hampton Court Palace; these were replaced in 1965 with the current rectangular windows with metal glazing bars. The Ionic order continues on the return to Saffrons Road which also has large arched openings at ground floor level. The corner pier between the two elevations has bands of red brick and stone with a stone cartouche beneath the moulded string course between ground and first floors. A similar pier concludes the Saffrons Road return, where the building abuts an addition of the 1950s, which replaced a section of the Edwardian garage damaged in the Second World War. The corner pier here appears to have been rebuilt. This second building mimics some of the detailing of the main garage, namely the brick- and stone-banding and the Baroque-inspired volutes flanking the central bay. Built in a different type of brick, however, and of far lower architectural quality, it is easily distinguishable as a later addition and does not have special interest. Its ground floor has also been more noticeably modernised; it was formerly open and contained petrol pumps, and is now glazed. The rear and side elevations of the Edwardian block are much simpler than the flamboyant principal facades, in brick and render, but still have characterful Arts and Crafts features such as tympana with patterned brickwork, Diocletian windows and decorative window aprons.

INTERIOR: A grand open well staircase with decorative metal balustrade and moulded timber handrail serves as a foyer to the car show room and leads to the offices on the first floor. Originally it provided access to the former Saffron Rooms only, the showroom having a separate door, now a window, beneath the balconette. The ground floor is a large open space where, as originally, cars are on display. All the surfaces are modern and some partitions have been inserted to form individual rooms; these are later additions. The mechanics' workshop is to the rear and again, most surfaces are modern.

Upstairs, the assembly room and card room of the former Saffron Rooms contain metal and timber partitioning dating from the 1950s, dividing the space into offices. The ceiling of the assembly room was not visible at the time of inspection and may retain an original cornice, perhaps like that which does survive in the former card room. The most impressive of the Saffron Rooms is the former supper room, now the Caffyns company board room. This retains its original doors, serving hatch to an adjoining kitchen, dado, cornice and a splendid timber fireplace. The latter is English Baroque in style with a lugged surround, Ionic columns and carved garlands of foliage. There is a decorative chimney piece too, this with a plasterwork cartouche and more garlands.

HISTORY: Caffyns were in business in Eastbourne from 1865, initially as gas and hot water fitters then as electricians, installing the lights on Eastbourne pier in 1901. In 1903, inspired by a request from a motorist (a rare sight at that time) to use their premises to store his Renault, the sons of the first Mr Caffyn established a garage, Caffyn Brothers, at The Colonnade. This was soon followed by a second on Marine Parade in 1906 offering cars for sale, mechanics' services and storage for around a hundred vehicles. The building on Meads Road opened in 1911 and was a car showroom and garage, with assembly rooms (called the Saffron Rooms) for hire on the first floor. The interwar years were prosperous ones for the firm, which opened new branches across Sussex, Kent and Hampshire, several (all now altered or demolished) in the streamlined Moderne style popular for garages in that period. After the war, the head office of Caffyns moved to the upper floor of their Meads Road garage where it remained at the time of listing.

The first car-related buildings followed the architectural fashions of the day; hence the free classical style of Caffyns Garage on Meads Road and of the branch at Marine Parade. Some garage and showroom designs were consciously vernacular or locally sympathetic, particularly after legislation in the 1920s that reacted against the spoliation of the countryside. By the end of the interwar period many car-related buildings were built in the streamlined continental Moderne style. Redolent of leisure, wealth and modernity, it was the perfect idiom for the motoring industry, which was not to favour the utilitarian buildings and bland corporate signage associated with modern petrol stations and garages until after the Second World War.

REASONS FOR DESIGNATION: Caffyns Garage is listed at Grade II for the following principal reasons:
* a rare surviving early motor car showroom dating to 1911;
* impressive Free Classical elevations, to designs by H Woolnough of Eastbourne;
* busy composition which mixes ebullient Baroque dressings with Arts and Crafts detailing and lettering;
* surviving supper room to the former Saffron Rooms inside with an impressive fireplace;
* group value with the neighbouring listed town hall and the Victorian church opposite.

Caffyns Garage is designated at Grade II for the following principal reasons:
* a rare surviving early motor car showroom dating to 1911;
* impressive Free Classical elevations, to designs by H Woolnough of Eastbourne;
* busy composition which mixes ebullient Baroque dressings with Arts and Crafts detailing and lettering;
* surviving supper room to the former Saffron Rooms inside with an impressive fireplace;
* group value with the neighbouring listed town hall and the Victorian church opposite.