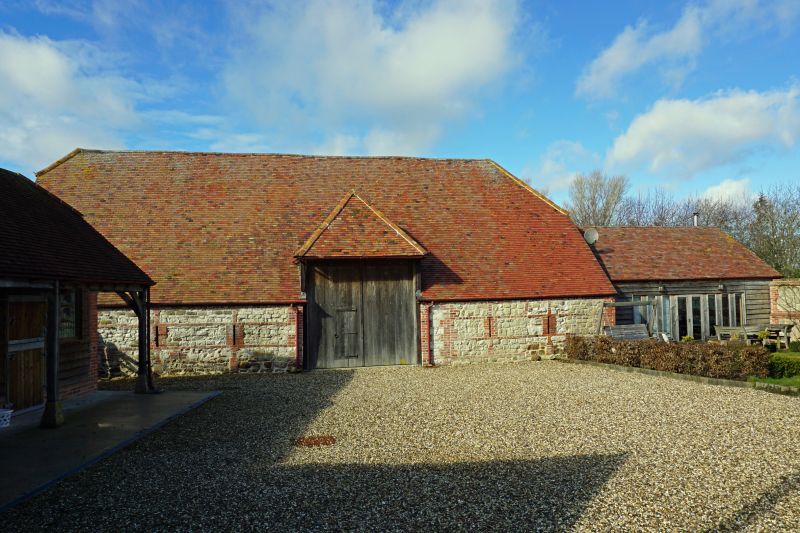 GV II
Barn. Probably late-medieval, contemporary with Ashbury Manor House which was built as lodgings to Glastonbury Abbey, c1488. The barn was altered probably in the mid to later C17, in the late-C18 or early- to mid-C19, and again towards the end of the C19.

PLAN: An aisled barn of four-and-a-half bays, reduced from at least five bays and aligned south-west to north-east. The north-east gable wall was built mid-bay curtailing the north-east end of the barn. The south-west gable wall was rebuilt, probably in the later C17 or C18 but appears to be in its original position. The barn has two pairs of opposing doors. The earliest pair are now off-centre, whereas barn entrances are normally symmetrically placed. The main entrance on the south-east elevation has a half-hipped cart porch. A second pair of later entrances to the east of the original cuts through the wall plate and on the south-east elevation has a sloping porch. Smaller doorways on the long elevations were inserted in the later C19 when the barn was used for livestock. Later C19 internal lofts survive particularly at the south-west corner. The barn has a half-hipped 'Berkshire' roof, with a shallow hip at the south west gable. When the barn was reduced the roof was rebuilt at the north- east end with a deeper hip.

EXTERIOR: The barn has brick and clunch plinth walls, repaired early-C21 on the northern elevation. These probably replaced sarsen plinths of which some remain at the base of the brick and clunch south-west gable wall. Above the plinths walls are weatherboarded studding, again replaced on the south-west and north-west walls, blocking former entrances on the north-west wall. The north-east gable wall is of clunch. The south-east wall is part brick, part clunch and brick, with two cart entrances and to the east of them a surviving vertical brick vent. The lower cart entrance has weatherboarded cheeks and a half-hipped tiled roofed porch set above the wall plate. The taller, inserted, cart entrance to the east of it is flush with the outer wall, rises above the wall plate under a sloping tiled canopy and is supported on brick piers, one of which is rebuilt.

INTERIOR: Aisle posts rest on horizontally laid timber pads on tall Taynton stone piers except for the north-eastern pier which was rebuilt in brick possibly as early as the C17. The internal structure is reinforced in an unusual manner. Aisle posts are connected to the longitudinal sill beams which rest on the outer plinth walls by horizontal timber plates set on transverse brick plinth walls, which are possibly of late C17 or C18 date, and which divide the aisles into bays. Most aisle posts are strengthened by 'passing shores' which run from these plates. Later softwood longitudinal and transverse braces have been nailed to the frame. The roof is of queen strut construction with wind braces in the south-west bays which in places cross the principal rafters. Similar to the frame, the roof is strengthened with tiers of softwood purlins, braces and some replacement collars, and all common rafters are replaced in softwood. The remains of softwood lofts survive in the south-west angle of the barn. Concrete floors laid to accommodate livestock probably lie over rather than disturb earlier floor surfaces which potentially hold valuable evidence which may determine the development of the barn and associated structures.
SUBSIDIARY FEATURES: Attached to the north-east end of the barn is a two-bay agricultural building probably dating from the second quarter of the C19, and used as a calf house. It is of high quality craftsmanship for the period. The north-west wall and north-east gable wall are of brick. The south-east lateral wall is timber-framed and weatherboarded, and like the roof is of elm. It has two unglazed windows with horizontal sliding shutters. The central truss has chamfered arch braces. The shared gable wall and potential evidence beneath the floor of the building are significant in understanding the development of the Great Barn.

The southern boundary wall fronting the lane is of mixed builds, mainly of sarsen and clunch, and contains within it a pier or buttress of dressed stone. It has been suggested that this may be part of the original entrance to the late-C15 lodgings. The wall continues to form the eastern boundary of the site and is again of mixed fabric and dates.

HISTORY: Ashbury Manor was built c1488 by Abbott Selwood (1457-93) of Glastonbury Abbey as a lodging place for students on their way to Gloucester College, Oxford, and for the Abbott travelling on the Somerset to London road. The barn is of local tradition and compares with Great Coxwell barn (Grade I) and Letcombe Bassett rectorial barn (Grade II). Carpenters' marks suggest that the barn is reduced in length and that it was raised a truss at a time with the aisles built second.

The original form of the barn and subsequent alterations to it reflect changes in the agricultural economy. It was built as a threshing barn in a tradition which changed little from the medieval to post medieval periods. The reduction of the building, probably of mid-C17 to early-C18 date, may coincide with the occupancy of Thomas White whose initials and date 1697 are inscribed above the door of the Manor House. Early to mid-C19 investment in the barn may be associated with the arrival of the Great Western Railway and the markets this opened up. The agricultural depression of the 1870s saw changes in agricultural practice from corn production to livestock.

REASONS FOR DESIGNATION: The Great Barn, Ashbury Manor is listed for the following principal reasons:
* It is probably a late medieval aisled barn associated with Ashbury Manor;
* Alterations to the barn reflect changes in the region's agricultural economy.

The Great Barn, Ashbury Manor is designated at Grade II for the following principal reasons:
* It is probably a late medieval aisled barn associated with Ashbury Manor;
* Alterations to the barn reflect changes in the region's agricultural economy.