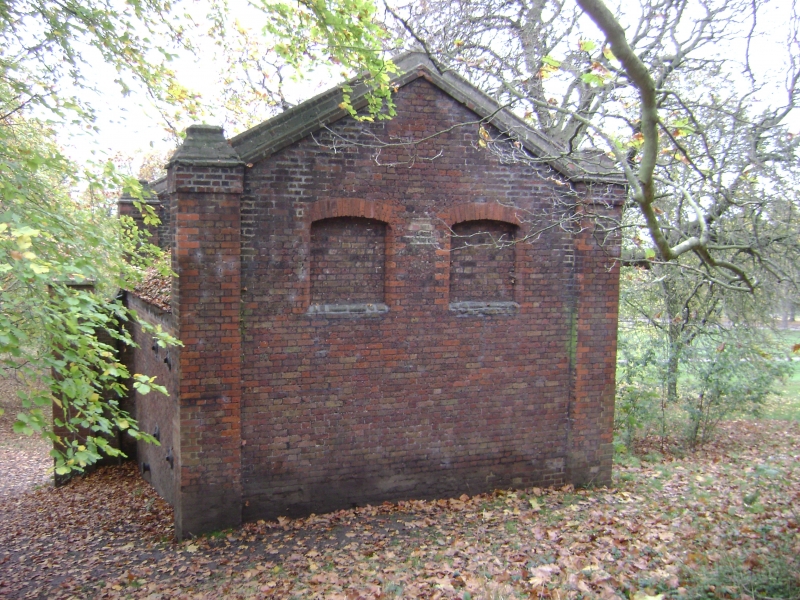 EXTERIOR: The north and south gable ends have higher projecting gabled walls. The north or entrance front has a central pedimented gable with round-headed arched apsed recess below. Stone plaques above the apse in a raised panel are inscribed "Greenwich Hospital Standard Reservoir". The round-headed arched central entrance has stone impost blocks and a C20 ledged plank door. There are brick piers at the edges of the pediment with ramped-down sections of brick walling ending in further brick piers which are partially chamfered. The sides have lower brick walls with moulded brick band and circular iron ties. The south end has a plainer gable with two end piers with pyramidal brick caps and two blocked Tudor-arched window openings. The brick walls of the conduit house, particularly the ends, are heavily covered with graffiti of varying dates and styles spanning two hundred years, from the late C18. (For example EDWARD 1770; M Pinfold 1775.) The earliest inscriptions are in well cut Roman letters, but C19 and C20 examples are less legible.

INTERIOR: Behind the entrance is a semi-circular niche barring access into the building. The roof structure was replaced in the later C20. The above ground structure retains iron tie bars and some cast iron pipes. The basement reservoir has a brick vaulted chamber. The adjoining conduits are not included in the listing.

HISTORY: At least three underground tunnels or conduits are known to exist under Greenwich Park, brick-built and practically large enough in which to walk upright. These were water mains designed to channel natural groundwater from higher up the hill down to the buildings of the Royal Hospital for Seamen, now the National Maritime Museum, at Greenwich (Grade I). The construction of the Royal Hospital was commenced in the reign of King William and Queen Mary in 1698, utilising an uncompleted building of 1664 originally designed as a palace, to the designs of Sir Christopher Wren. The hospital opened in 1705 although it was not completed until much later in the century. Pevsner's "Buildings of England" considered that Nicholas Hawksmoor had special responsibility for the conduits. In 1698 he became Clerk of Works, retaining the post until 1735. He was also Deputy Surveyor there between 1705 and 1729. Although the surviving conduits were rebuilt at the end of the C17, earlier conduits for the Tudor palace or even medieval manor houses may have been reused by the Naval engineers. Lead pipes carried the water to reservoirs at the end of the conduit systems. The Standard Reservoir Conduit House contained a reservoir. The C18 and C19 saw a decline in the conduit system and several were abandoned as early as 1732. In 1831 a report argued the need for an improved water supply for the Royal Hospital by the creation of reservoirs and the replacement of the existing lead pipes with iron. In 1845 a new reservoir was built in Greenwich Park by Great Cross Avenue. In 1905 and 1906 Greenwich Borough Council inspected these structures and made reports. After this, known entrances to the conduits were sealed by the Royal Parks authority to prevent unauthorised access. There are three conduit heads from this system: Hyde Vale, One Tree Hill Conduit Head and the Standard Reservoir Conduit House, all listed.

REASONS FOR DESIGNATION
The Standard Reservoir Conduit House is designated at Grade II* as being of more than special interest for the following principal reasons:
* This is a little altered, Classical conduit house, with basement reservoir attributed to the architect Nicholas Hawksmoor, Clerk of Works at Greenwich between 1698 and 1735.
* Conduit houses are a rare building type and this is a particularly impressive example.
* It has added value as one of three related late C17 or early C18 conduit houses which were part of the earliest water supply for the Royal Hospital of Seamen, now the National Maritime Museum, Grade I.

The Standard Reservoir Conduit House is designated at Grade II* for the following principal reasons:
* It is a fine conduit house, covering a reservoir, attributed to the architect Nicholas Hawksmoor, Clerk of Works at Greenwich between 1698 and 1735.
* It is larger and architecturally more elaborate than the already listed Conduit House at Hyde Vale (Grade II).
* Conduit houses are a rare building type, and this is a particularly impressive example.
* It has additional value as one of three related late C17 or early C18 conduit houses which were part of the earliest water supply for the Royal Hospital of Seamen, now the National Maritime Museum, listed Grade I.