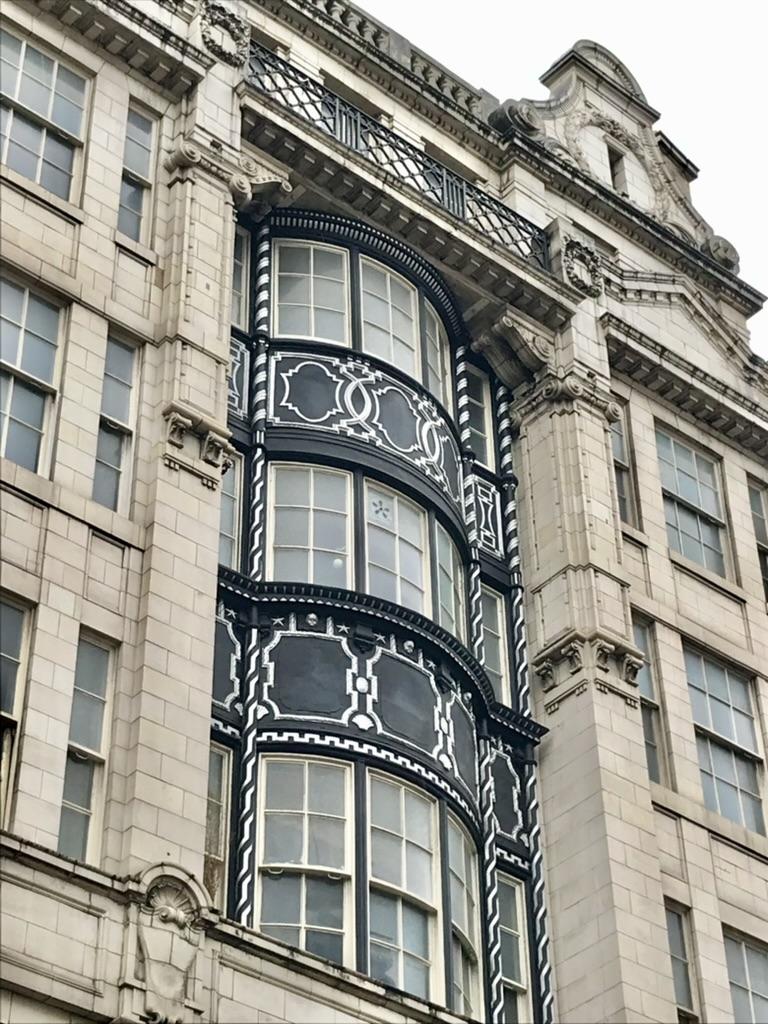 EXTERIOR: All three facades are clad in cast stone in an eclectic Edwardian Baroque style, with northern European influences. The three-bay Oxford Street frontage is the most elaborate of the three. It has a two-bay ground floor shop opening (with modern shop front) to the right and a grand entrance bay with channelled rustication to the left. The original coffered timber door with bronze lion handle survives. At first floor is an arcade of semi-circular headed windows arranged in a pair, then a trio, then a pair; that above the doorway has a balconette with cast iron railings. The bays are divided by pilasters with alternating quoins and there are cartouches in the place of capitals, these breaking into a deep entablature. Behind this, recessed slightly, rises three storeys of offices with a central projecting shallow bow in bronze with three five-light mullioned windows, all of which contain timber sashes. The bronze bow is decorated with C17-style patterns of panels, stars, cherubs heads and shells. The two flanking bays have tripartite mullion windows with sashes. The sixth storey is recessed further and has a row of sash windows rising behind iron railings (in the central bay) and triangular pediments (to the flanking bays); the elevation is terminated with a stone balustrade (to the centre) and gables (to the flanking bays).

The elevations to Wardour Street and Berwick Street are in a similar style but have only four storeys. The fenestration is simpler, lacking the bow for example, yet it follows the Oxford Street arrangement of semi-circular headed windows to the first floor and sash windows above. Some of the same motifs are deployed, including pilasters with alternating quoins and cartouche capitals, carved laurel wreaths and dentil cornices. The ground floor shop fronts are modern, but respect the historic openings and a second entrance to the building survives on the Berwick Street elevation, this with a semi-circular moulded surround.

INTERIOR: Entering through the main entrance on Oxford Street, a barrel vaulted hall with plasterwork ceiling leads to a staircase with marble clad walls (green marble with inlaid panels in cream) and a brass handrail. This leads to the first floor where little historic fabric survives, bar this stair and a secondary stone stair which serves the Berwick Street entrance. The latter rises through the full height of the building, and survives unaltered with its decorative iron balustrade and moulded timber handrail. A lift shaft has been inserted into the stairwell of the main staircase, however, meaning that the survival of metal balusters is more fragmentary at its lower levels. The second, third and fourth floors have a standard plan, the original arrangement, whereby many small rooms are accessed from an arched corridor running along the top of the T shape of the building. A number of original door-cases with floral carved detailing in the entablatures, and original doors with lugged panels survive. There is also a third stair, possibly a fire escape, this a wrought iron spiral staircase with barley sugar balusters and decorative treads.

HISTORY: The building occupies the plots of four earlier buildings, two facing Oxford Street, one Wardour Street and one Berwick Street. The 1875 Ordnance Survey map shows that there had been interconnection between one of these Oxford Street buildings and the building facing Wardour Street and it may be that these two were in the same ownership prior to further buildings being acquired and the land redeveloped. In the early C20 a number of blocks of Oxford Street's small, narrow shops were bought up and redeveloped with single buildings: Selfridges (the eastern section built 1907-09 and whole range completed 1928) is the best-known example. The developers of Pembroke House may have had grander ambitions, perhaps to acquire the entire block here, but only four properties were purchased resulting in an unusual arrangement, with three facades on three different streets in a T-shaped plan. The original use of the building was as a shop on Oxford Street, a garage running along the ground floor of the cross of the T with frontages on both Berwick and Wardour Streets and offices above. Tenants included the Confederation Life Association, a glass and china dealer, an electricity company, theatrical managers, advertising agents, surveyors, Christian science practitioners, draughtsmen, and photographers. The garage was run by a Frederick Webster and Co, motor car dealers. It is not clear which tenant occupied the Oxford Street shop itself.

Offices comprised a new type of building during the Victorian period, reflecting the enormous growth in Britain's domestic and foreign business. Ground plots were expensive to acquire, so building heights increased to accommodate more letting space, often with impressively treated exteriors to give an appearance of dependable dignity. Many combined ground floor shops or banks, with offices on the upper floors, in grand premises for prestigious companies. But not all offices were built by companies for their own occupancy and the speculative development of offices, whereby chambers were built by a developer and then rented out to smaller businesses, was common. Not designed as a manifestation of a single corporate entity, these developments are usually more modest architecturally. Yet this was not always the case, and certainly not so at 133-135 Oxford Street where a distinguished architectural practice was employed. John Simpson and Maxwell Ayrton became partners in 1905 and in the twenty or so years until the practice disbanded in 1928 designed a number of significant buildings including the former Wembley Stadium (now demolished, Grade II) and Roedean School in Brighton (Grade II) as well as numerous commercial buildings and houses, such as the last large private house to be built in the West End at 23 St James's Place in 1929-30.

REASONS FOR DESIGNATION: 133-135 Oxford Street is listed for the following principal reasons:
* the cast-stone clad building has three eclectic Baroque-style elevations, that to Oxford Street in particular, with strong compositional qualities and good carved detailing; this does not lose its impact from the ground floor shop front being modern;
* the design is by a notable architectural practice and is largely unaltered externally;
* surviving features inside include a number of staircases, wood doors and door-cases along with the plan form of rooms accessed by long corridors.

133-135 Oxford Street has been designated for the following principal reasons:
* the cast stone-clad building has three eclectic Baroque-style elevations, that to Oxford Street in particular, with strong compositional qualities and good detailing not diminished by the modern shop front at ground floor;
* the design is by a notable architectural practice and is largely unaltered externally;
* surviving features inside include a number of staircases, wood doors and door-cases along with the plan form of rooms accessed by long corridors.