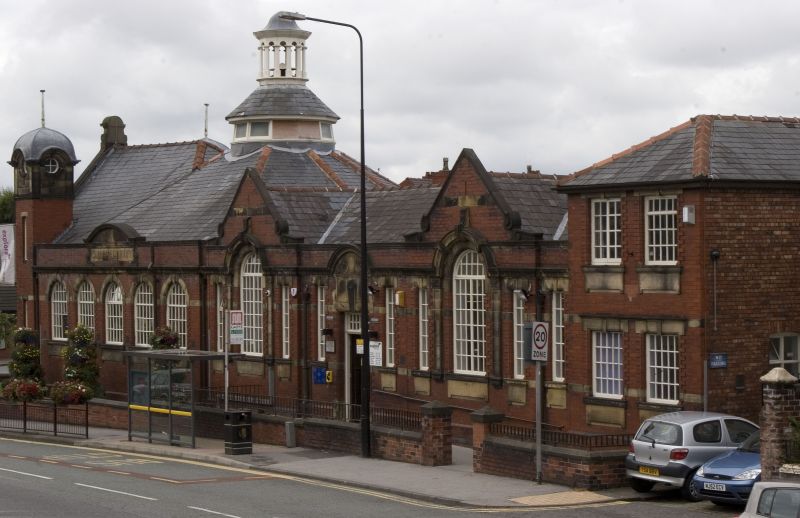 II
A former lecture hall and library, now a library, built in 1905-6 to a design by the architects J B & W Thornley and funded by the benefactor Andrew Carnegie.

PLAN: The building is an irregular polygon in plan with a boundary wall on three sides.

EXTERIOR: The former main entrance to the lecture hall overlooks the junction of Wigan Road, Old Road and Bryn Street. It is gable ended and two-storey with a short flight of steps leading to part-glazed double doors beneath a segmental arched fanlight, above which is a keystone and corbels that carry a dripmould above the door and flanking windows. The upper floor has a Venetian window with a stone sill, columns and dripmould and the elevation is finished with an ornately carved date stone. The gable is flanked by two corner turrets with narrow windows to both floors. The tower's upper parts are constructed in ashlar with round windows and are topped by lead caps with flagpoles. The Wigan Road and Old Road elevations are similar to each other being predominantly single-storey with five bays containing round-headed windows to the entrance hall and former lecture hall and a centrally positioned stone parapet bearing the words `CARNEGIE LIBRARY' on the Wigan Road elevation and `LECTURE HALL' on the Old Road elevation. The roof above is topped with a cupola over a lantern. Both elevations continue with gables containing round-arched windows flanked by stone pilasters that carry a dripmould. Narrow windows flank either side of the library entrances on both elevations, above which is a stone panel with a central carved keystone and carved scrollwork beneath a round-arched dripmould. The Old Road elevation has two further single-storey bays at its west end while the Wigan Road elevation's west end finishes with a two-storey two-bay arrangement beneath a hipped roof. Rectangular windows have stone sills with panels beneath and stone lintels. The building's angled west elevation is relatively plain and is of two storeys to the north and centre with chimney stacks above and some modern windows, doors and additions. There is a plain single-storey gable to this elevation's south end. Roofs are a mixture of pitched and hipped. The building is bounded by a low brick wall with stone coping through which there are three entrances with brick gateposts, two of which have wrought iron gates.

INTERIOR: Part glazed timber doors at the building's east end lead into a vestibule that has its walls tiled to half height. Beyond this half-glazed doors lead into an entrance hall with a parquet floor that is panelled to dado height. There are toilets off the entrance hall and a timber staircase leading to the balcony of the former lecture hall. The balcony is stepped and has benches with close boarded backs. The timber balcony rail and stairwell rail are of a matching design. From the entrance hall timber doors with half-glazed frosted glass bearing the words `LECTURE HALL' give access into what is now a children's library. Throughout the library a number of original features survive including wall panelling to dado height, doors, door surrounds and windows. Modern bookshelves have been carefully installed to accommodate the original timberwork. A modern ceiling has been installed above the children's library but has been carefully designed to reveal the centrally-placed lantern. At the western end of the room a former stage to the lecture hall has been removed and a modern library issue desk installed to serve both the children's and main library. The stage's former modest proscenium arch remains in situ. The head librarian's room is accessed from the issue desk and contains some original doors and door surrounds.
The main library has original entrances from Wigan Road and Old Road both with partly tiled vestibules. Passing through half-glazed timber doors with rectangular fanlights above there are part-glazed screens, the original timber issue desk and two glazed ceiling domes in the main library. To the rear there is an alcove with stained glass windows and also to the rear there are doors leading to two-storey staff accommodation that contains original features such as doors, some stained glass windows, part-glazed screens and fireplaces.

REASONS FOR DESIGNATION
The Carnegie Library, Ashton-in-Makerfield is designated at Grade II, for the following principal reasons:
* It is a good early-C20 example of a former lecture hall and library constructed at the expense of the benefactor Andrew Carnegie, which displays significant architectural presence.
* The building possesses a variety of original fixtures and fittings within an internal layout that is little changed despite some modernisation.

The Carnegie Library, Ashton-in-Makerfield is designated at Grade II, for the following principal reasons:
* It is a good early-C20 example of a former lecture hall and library constructed at the expense of the benefactor Andrew Carnegie, which displays significant architectural presence.
* The building possesses a variety of original fixtures and fittings within an internal layout that is little changed despite some modernisation.