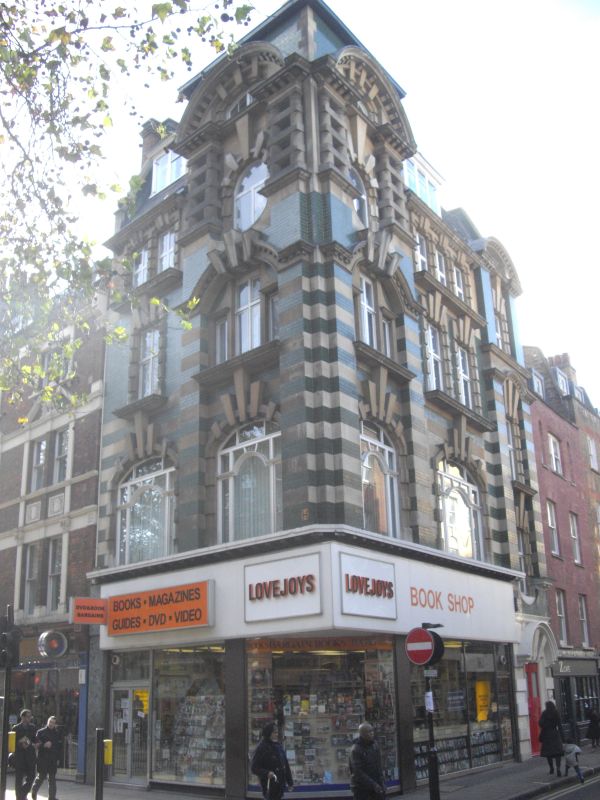 EXTERIOR: This is a neo-Baroque style building on the corner of Charing Cross Road and Old Compton Street. The five-storey structure has pitched slate roofs with dormer windows and a square corner tower with a pyramidal roof and timber finial. The principal elevations are faced in contrasting bands of jade glazed brick and yellow sandstone, and are eccentrically and three-dimensionally detailed with closely-packed sandstone dressings. The angle tower, for example, has its first and second-floor windows set in shallow, round-headed recesses with elongated voussoirs above, those on the second-floor breaking through the chunky modillion cornice. In the tower's third floor the windows are flanked by pairs of rusticated columns, these supporting great, open, segmental pediments with the fifth-storey windows contained in their tympana. These details are repeated in the end entrance bay on the return to Old Compton Street. The timber window frames of the first floor windows have curved glazing bars in the same shape as the pediments; elsewhere the windows are pairs of casements, large casements flanked with smaller marginal lights, or three-light mullions, each with the same oversized voussoirs.

The ground floor has a modern shop front, although one of the original doors (on Old Compton Street) survives unaltered with moulded hood, voussoirs and quoins. A historic photograph shows the main entrance was formerly on a canted corner and had a broken segmental pediment, and that the shop front was divided by rusticated piersonly the dentil cornice above the fascia and a small section of Art-Nouveau style decorative tiling to the Old Compton Street fascia visibly survives of the older shop.

INTERIOR: The basement and ground floor are entirely modern. Above this the arrangement of rooms is largely original and the upper flights of the staircase survive. The latter has a square newel post and turned balustrade; in its lower flights it is concrete. Some window fixtures, doors and cornices survive in the upper floors too in designs typical of the period.

HISTORY: 99a Charing Cross Road was built in 1907, to designs of 1904 by CH Worley. The design of the elevations changed after being first published in February 1904 following objections from neighbours about oriel windows on the upper floors; this may explain the delay in construction. 99a Charing Cross Road was speculatively built as a shop and offices by T Stevens, a property developer. In 1910 it was occupied by the Franco-British Electrical Company, who sold electric advertisement signs; they are likely to have been the first tenants.

CH Worley (1834-1906) is a little-known architect, but was the designer of a number of houses, shops and offices in London's West End including 3 Wimpole Street, a corner building like this one, and 3 Soho Square (both Grade II). Worley was the brother of RJ Worley, also an architect, who designed Sicilian Avenue, Holborn and the London Pavilion (now part of Trocadero) Piccadilly Circus, and Albert Court, a mansion block next to the Royal Albert Hall (all Grade II listed).

REASONS FOR DESIGNATION: 99a Charing Cross Road is listed for the following principal reasons:
* materials: unusual deployment of brightly-coloured materials in the contrasting bands of jade glazed brick and yellow sandstone;
* architecture: what the Pevsner entry describes as the 'explosively Baroque' design of the three-dimensional and exuberant street-facing elevations.

99a Charing Cross Road, of 1907, by CH Worley is designated at Grade II for the following principal reasons:
* materials: unusual deployment of brightly-coloured materials in the contrasting bands of green glazed brick and yellow sandstone;
* architecture: what the Pevsner entry describes as the 'explosively Baroque' design of the three-dimensional and exuberant street-facing elevations.