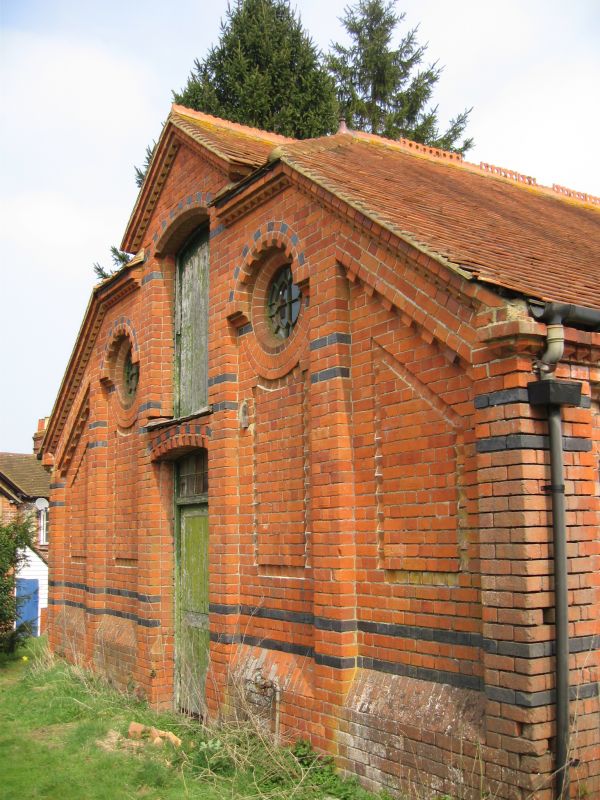 PLAN: Rectangular single-cell plan on both ground and attic floors.

EXTERIOR: The barn is a long rectangular building with a half-hipped roof. Its outer walls are divided into bays - five across the gable ends and ten along the north and south flanks - by flat brick pilasters which rise from a continuous chamfered base to a nail-head eaves cornice. Bands of grey brick run through the pilasters, and the window- and door-heads have alternating grey headers.

The west gable end facing a lane is the principal elevation, and displays a great variety of decorative moulded and chamfered brickwork. The outer bays have inset fielded panels within a border of moulded brick. The inner bays have similar panels, above which are circular windows with radial glazing bars, deeply recessed beneath moulded brick hoods. The central bay has two segmental-headed doorways placed one above the other, giving access to the main floor and hayloft respectively; the doors are of vertical timber boards, the lower one having a glazed overlight. The upper doorway breaks through the eaves line of the roof hip to form a large gablet or half-dormer.

INTERIOR: The interior comprises two very large spaces: the main barn at ground level and the hayloft above. The former has a rough lime floor and a ceiling of exposed beams - in fact the tie-beams to the main roof structure. A ladder stair at the western end leads up to the attic space, which has a boarded floor and an open timber roof of softwood construction, with collars and vertical struts reinforced by iron brackets and straps.

HISTORY: The Park Place estate, formerly a farm known as Perkes, Strowdes or Vyne's Place, was first established as a country seat by Lord Archibald Hamilton, who bought the land in 1719 and subsequently built a mansion there. From 1738 it belonged to Frederick, Prince of Wales, and from 1751 to General Henry Seymour Conway, who enlarged the estate and began laying out the present pleasure grounds. The estate was purchased in 1869 by the paint manufacturer John Noble, who re-landscaped the grounds and employed the architect Thomas Cundy III to rebuild the main house. He also redeveloped a number of the estate's agricultural buildings in a 'model farm' style. The dairy buildings at Park Place Farm were added to the existing complex at some point between 1875 and 1898, probably - judging by their stylistic similarity to the dated complex at nearby Templecombe Farm - towards the end of that period.

REASONS FOR DESIGNATION: The barn at Park Place Farm is listed for the following principal reasons:
* It is of high architectural quality, most notably for its vivid polychromy and lively brickwork detailing;
* As such it is of considerable rarity, dating from a period of severe agricultural recession;
* It is largely unaltered, retaining its original doors, windows and roof timbers as well as its impressive interior spaces.

The late C19 barn at Park Place Farm has been listed at Grade II for the following principal reasons:
* It is of high architectural quality, displaying vivid polychromy and lively brickwork detailing;
* As such it is of considerable rarity, dating from a period of severe agricultural recession;
* It is largely unaltered, retaining its original doors, windows and roof timbers as well as its impressive internal spaces.