A Grade II Listed Building in Shanklin, Isle of Wight 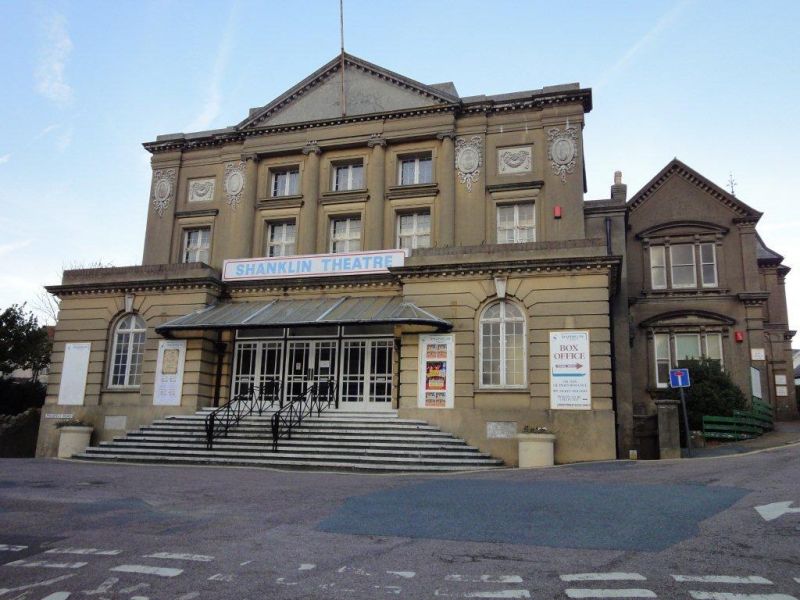 II
Originally a literary institute, later town hall and theatre. The larger northern part is mainly of 1933-34 by Messrs Cooper and Corbett, a rebuilding of an 1878 Literary Institute after a fire. The smaller southern part is an addition to the Literary Institute of 1884 by E.G. Cooper. Both are constructed of rendered brick with slate roof.

EXTERIOR: The northern part is in French classical style. The west front has a pediment to the central three bays and the two upper floors are supported by four engaged Ionic columns. There are three multi-paned metal casements to the second floor and larger mullioned and transomed casements with cornices to the first floor. The end bays have two pilasters with oval medallions and swags and recessed stone panels decorated with swags in place of second floor windows. The first floor windows are mullioned and transomed casements. The ground floor is built-out to provide a foyer with flat roof with modillion cornice and is rusticated with central glazed canopy above three double doors with marginal glazing, approached up a flight of steps with two cast iron handrails. The side bays project slightly and have tall round-headed windows with keystones. Underneath the northern window is a foundation stone laid on 28th February 1933. Underneath the southern window is a re-laid foundation stone to the original Institute laid by A.D.R.W. Baille Cockrane Esq MP on August 1878. The side elevations have two round-headed windows to the west followed by lower sections with circular windows at the top and round-headed windows below. The northern side has an external closed-in staircase to provide access to the gallery. The eastern end has a tall flat-roofed flytower. Most of the south side is obscured by the south 1884 building but the western end of the south side retains a fragment of the 1878 Institute which is of two storys rendered with two 12-pane sash windows to the first floor, a taller pedimented sash window to the ground floor and a pedimented doorcase with eared architrave.
The remainder of the south side comprises the 1884 Institute addition in Gothic style which has a west facing gable with end pilasters and tripartite window on two floors with curved pediment over. The remainder of the south side has two double sash windows and a projecting section with porch with pyramidal slate roof crowned by a metal finial, a further projecting section of two bays with two double sash windows and an end recessed section of one bay with pyramidal roof with metal cresting.

INTERIOR: The north theatre building is entered up the western steps and has an Art Deco interior. The foyer has a moulded cornice and ceiling with plaster sunburst pattern, original 1930s wooden panelled box office with two round-headed arched apertures, marginal glazed doors leading into the auditorium, side panelled doors and staircases to east and west leading to the gallery. There is a tessellated floor with Vitruvian scroll and compass design. The auditorium has a compartmented ceiling with central metal ventilation grille. The east and west walls are panelled and at the eastern end have four oculi with stained glass panels depicting ships and other appropriate emblems. The western gallery has a balcony with plaster shield decorations. The eastern stage has a proscenium arch with stylised plume design.

The south 1884 wing is entered through the porch on the south side. The porch has a boarded ceiling with chamfered ribs and quatrefoil carvings in the corners and a multi-coloured tiled floor. A north straight-flight staircase with carved balusters and moulded square newel post leads to two rooms, the smaller western room at one time used as the Mayor's Parlour and Members Room, which, apart from the six-panelled door, does not retain any original features. The larger eastern room was at one time the Council Chamber and has a ribbed boarded ceiling divided into nine compartments with some decorative ventilation grilles. At each end are wooden fireplaces with eared architraves, overmantels with mirrors enclosed by semi-circular projections with four miniature columns and tiled fire surrounds. It is entered by two six-panelled doors.

HISTORY: The hill on which this building was built was crowned by a windmill in the early C17, shown on early maps. Later there was a sandpit which accounts for the slope on the north side of the building. On 6th August 1878 a foundation stone was laid for the Shanklin Literary Institute by A.D.R.W. Baille Cockrane Esq, MP for the Isle of Wight.

This building was the last in a series of venues in the history of an institute which had started in 1850 with the formation of the Mechanics Institute with a library of 300 volumes in a member's house, progressed to the Mutual Improvement Society in 1856, meeting in school buildings, and in 1865 a new Literary and Scientific Institute was founded in Grange Road which later became the Old Church Parish Room.

In 1879 Shanklin Literary Institute was opened, designed by E.G. Cooper and housing a reading room, library, billiard room and an art class room. E.G. Cooper appears to have been a local architect. He designed Sandown Town Hall, built in 1869 in Neo-Classical style, which was originally a privately owned place of assembly.

A building is shown on the site on the first Ordnance Survey map of 1880 but the plan does not quite match a circa 1880 photograph. This shows a Classical style building with the lettering "Institute" in the pediment with recessed centre of three bays behind full-height Corinthian columns with central entrance, flanked by pedimented windows on the ground floor and smaller windows above, with further end bays and steps to the street.

On the 20th July 1884 the Isle of Wight Times reported the opening of new rooms, a new Reading room and Amusement Room, raised by subscription. These new rooms were an addition to the south and are shown on the 1888 Ordnance Survey map which is labelled "Institute" and also on the 1909 Ordnance Survey map with no changes. A photograph of circa 1910 shows these new rooms added to the south of the existing Institute building with a gable end with a tripartite window and behind this the pyramidal roof visible.

In 1913 the whole building became Shanklin Town Hall and in the same year the council gave the order for the words "Institute" and "Reading Room" to be erased from the building. In 1925 a serious fire caused £2,000 worth of damage. In 1929 Shanklin Urban District Council recommended spending £17,000 on structural improvements, but this was amended to £14,000 because Sandown Council objected in view of the proposed amalgamation of both local authorities. In August 1932 approval to proceed with reconstruction was given and by the beginning of October work was well advanced on the demolition of part of the old Town Hall.

The alterations took the whole of 1933 and the official opening ceremony, to be performed by Dr Cowper was arranged for 21 March 1934. The Architects were Messrs Cooper and Corbett. The work included a flytower. During the Second World War the Town Hall theatre was used for dances. After the war the Theatre put on repertory plays in the summer season and concert parties on Sundays. In the winter local drama groups and the Island Savoyards performed. Later the building ceased being used as a town hall and the whole building is currently used for theatrical purposes.

REASONS FOR DESIGNATION:
The Shanklin theatre and former Town Hall is designated at Grade II for the following principal reasons:
* The south part of the building of 1884 is of special architectural interest as an unaltered example of a pre-1914 purpose-built addition to a literary institute.
* The mainly 1933-34 northern part is also of special architectural interest as a rare example for this period of a provincial combined theatre and hall retaining completeness of design,including the proscenium arch, balcony and rare survival of a foyer with original box office.

The Shanklin Theatre and Town Hall is designated for the following principal reasons:
* The south part of the building of 1884 is of special architectural interest as an unaltered example of a pre-1914 purpose-built addition to a literary institute.
* The mainly 1933-34 northern part is also of special architectural interest as a rare example for this period of a provincial combined theatre and hall retaining completeness of design,including the proscenium arch, balcony and rare survival of a foyer with original box office.