A Grade II Listed Building in Campden, Kensington and Chelsea 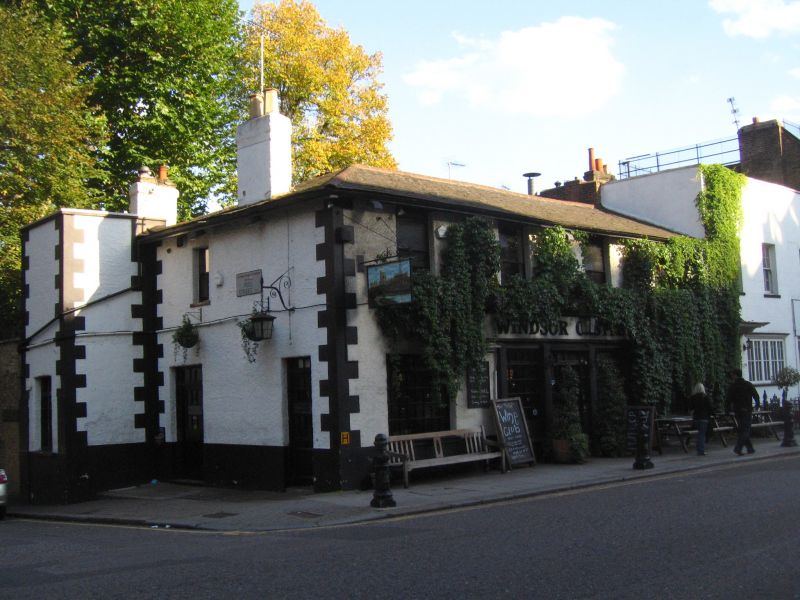 PLAN: The building comprises two main blocks: the original front block to the west with a slightly later irregularly-shaped extension projecting from the north-east corner; a modern single-storey kitchen extension spans the rear of the site. The ground floor is divided by screens into several small drinking areas, with separate access from the street. The first floor has several small rooms accessed via a common landing.

EXTERIOR: The principal (west) elevation to Campden Hill Road is of painted roughcast with rusticated stucco quoins. It is of four bays: the ground-floor windows have fixed multi-pane glazing, while the smaller first-floor windows have plate-glass sliding sashes. The glazed central doorway, marked 'CAMPDEN BAR', forms a pilastered centrepiece with the two flanking windows. The return (north) elevation to Peel Street has two further glazed doors marked 'PRIVATE BAR' and 'SHERRY BAR'. A flat-roofed north-east block, also with stucco quoins, projects to the left, with a large multi-paned window at ground level. The rear (east) elevation is of painted brick, with projecting wings to left and right. Three six-over-six-pane sashes survive on the first floor, one on the original block and two on the north-east extension flanking a projecting stack.

INTERIOR: The ground floor interior, remodelled in 1933, comprises four distinct drinking areas, divided by panelled oak screens and served by a C-shaped bar with a matchboard front and carved mahogany shelving behind. The Campden bar (front centre) and Private bar (front left) have pine matchboard dados and pew-like fixed benches with tall shaped ends. The Ordinary Bar (right) has a matchboard dado, plain glazed screens and a brick fireplace in the end wall. The Sherry bar (rear left) has oak panelling to frieze height, with moulded verticals and chamfered rails enclosing sunk square panels. The bar front has similar panelling. A ceiling beam spans the space, with corbels carved to resemble bunches of grapes. An arched brick fireplace in the rear wall has a painting of Windsor Castle set into the panelling above. The upper panels in this area have applied cartouches with relief carving. To the left is a deep window bay with panelling and fixed benches.

A stair behind the bar area leads up to the first floor, which appears to retain its 1820s form, comprising several small bedrooms opening onto a common landing via four-panelled doors set in moulded surrounds.

HISTORY: Campden Hill Road, which connects modern-day Kensington High Street and Notting Hill Gate, was originally a lane running between the estates of Holland House and Campden House, two large mansions built for wealthy courtiers in the early C17. By the beginning of the C19, the area was gradually being engulfed in London's western suburbs, and the Campden House estate was parcelled up for development; Campden Street and Peel Street were laid out from 1823 onwards by John Punter and William Ward. In 1826 Ward granted a 99-year lease on the plot on the corner of Peel Street and Campden Hill Road to the brewers Douglas and Henry Thompson of Chiswick, who developed the site as the Windsor Castle pub. Various changes were later made to the building, including two phases of refenestration and the remodelling of the ground floor interior around 1933. In the late C20 a flat-roofed kitchen extension was built to the rear.

REASONS FOR DESIGNATION: The Windsor Castle pub is listed for the following principal reasons:
* Early fabric: a late-Georgian building, still in its original use, that retains a substantial proportion of its original fabric.
* Interior: the 1933 remodelling created an interior of considerable charm, exemplifying the 'Old English' phase of inter-war pub design.

The Windsor Castle pub, built around 1826 and remodelled in 1933, is recommended for designation for the following principal reasons:
* Early fabric: a late-Georgian building, still in its original use, that retains a substantial proportion original fabric.
* Interior: the 1933 remodelling created an interior of considerable charm, exemplifying the 'Old English' phase of inter-war pub design.