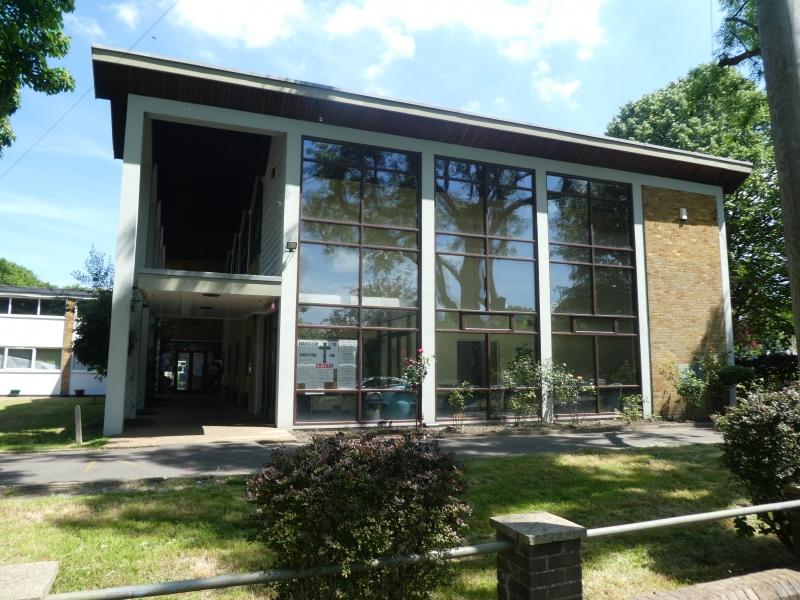 EXTERIOR: Mitcham Methodist Church comprises a chapel and hall, placed at right angles to each other on the south and east sides of a grassed courtyard overlooking the Cricket Green; running perpendicular to the north end of the hall is a range of classrooms. The chapel has an exposed reinforced concrete frame of seven-by-four bays, with pale yellow brick infill walls, painted softwood windows and a striking folded concrete slab roof. The roof plane extends beyond the chapel's north wall to incorporate an external walkway, whose concrete piers are also part of the main chapel frame. This walkway provides direct access to the chapel itself, under a concrete slab canopy at its west end, and to the hall at the east end. The chapel is rectangular on plan with a full-width western atrium, this with floor to ceiling glazing in the west-end wall.

The hall and classroom ranges are flat-roofed with load-bearing brick walls and much plainer in composition and detailing, with interior fittings typical of their period; this range lacks special interest, which is concentrated in the church.

INTERIOR: fair-faced brickwork, with rectangular riven York stone slab facings to the east wall behind the communion area. The six-bay chapel is windowless at the western end, and then has four bays with glazing to the upper portions and small square windows at eye level. The east end is illuminated by full-height glazing in the final bay on the south side only. The ceiling is clad in narrow strips of cedar and the floor is small hardwood blocks.

FIXTURES & FITTINGS: The majority of the original fittings survive and these include: wood bench pews and choir stalls; organ pit with organ; altar rail; east end wooden cross; lectern; and pulpit. These were also designed by Mills. The original lighting appears to have been lost since 1959.

HISTORY: Edward Mills was the foremost architect of Methodist churches in the post-War period, designing fourteen new churches in England, including Greenwich (1953), Loundsley Green, Chesterfield (1965) and Trinity, Woking (1965) as well as the cathedral at Mbale, Uganda. Mills was himself a Methodist, and his approach to church design was underpinned by his faith, as outlined in his book 'The Modern Church' published in 1956, where he advocated the importance of a church as a community centre. A preliminary design for Mitcham was illustrated in the book, showing the church with community hall and classrooms arranged around a cloister. As built, Mitcham Methodist Church differs from these plans, but the essential concept of a community centre and church combined, arranged around a courtyard, remained. In discussions when the church was being planned, Mills was a strong advocate of adopting a Modernist idiom. He told the clients he favoured 'a frankly contemporary design using present-day materials and methods of construction, and endeavouring to present though this means an honest expression of the purpose of the building so designed.' Mitcham Methodist Church was the most widely-published of Mills' church designs. As well as featuring in his own book and various architectural journals, it was one of three English churches showcased in 'The New Churches of Europe' of 1964 by GE Kidder Smith, alongside St Paul's Bow Common (Grade II*) and Coventry Cathedral (Grade I).

Mills was also the architect of residential and industrial buildings, most notably the canteen at the Rhone-Poulenc factory in Dagenham which became one of the first post-war buildings to be listed. Mills contributed to the design of elements at the Festival of Britain site including the administration building. His obituary in the Architects Journal described him as 'a post-war pioneer of concrete design'.

REASONS FOR DESIGNATION: Mitcham Methodist Church is listed at Grade II for the following principal reasons:
* architectural interest: in particular, dynamic folded slab roof which extends beyond the church's end wall to create a covered walkway;
* one of the most distinctive designs by Edward Mills, the foremost post-war architect of Methodist churches whose writing on church design was influential, as were his innovations in the use of concrete
* materials and finish are good quality, in particular the York stone-clad east end, epitomising Mills' belief in the eloquence of natural materials;
* quality of light and space of the interior;
* retains the vast majority of its interior fittings.