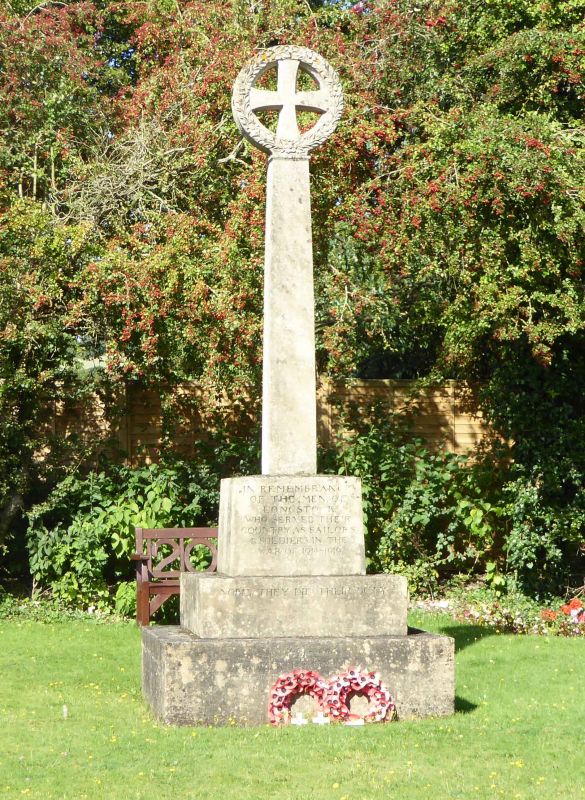 II
War memorial of ashlar stone blocks erected in 1919 which was designed by the architect Thomas D Atkinson (1864-1948) of Cambridge and Winchester.

DESCRIPTION: The war memorial consists of a two-step square calvary on which is a square socket stone, all built of ashlar blocks. Above this is a four-sided tapered stone column surmounted by a Patee cross encircled with a wreath of leaves and flowers.

On the front, eastern side of the socket is a dedication to the men of the parish who served and fell in the Great War in seriphed capitals which reads: 'IN REMEMBRANCE / OF THE MEN OF / LONGSTOCK / WHO SERVED THEIR / COUNTRY AS SAILORS / & SOLDIERS IN THE / WAR OF 1914-1919'. Under this on the top step of the calvary is the dedication, 'NOBLY THEY DID THEIR DUTY'. Below this on the bottom step of the calvary are the names of those who fell in the 1939-1945 war.

HISTORY: The memorial which was designed by the architect Thomas D Atkinson of Cambridge and Winchester (1864-1948) was built in 1919 by the firm of Blackwell's. The firm of Blackwell and Moody cleaned and re-cut the names in 2008. It commemorates those fallen in both World Wars.

REASONS FOR DESIGNATION:
The War Memorial at Longstock is designated at Grade II for the following principal reasons:
* A simple yet elegant architect-designed memorial of good quality craftmanship, materials and design.
* The fallen of both the Great War and the Second World War are included, and it is an eloquent witness to the impact of tragic world events on this community.
* It occupies a visually distinctive position in the village, it is within the conservation area and is near to a number of listed buildings.