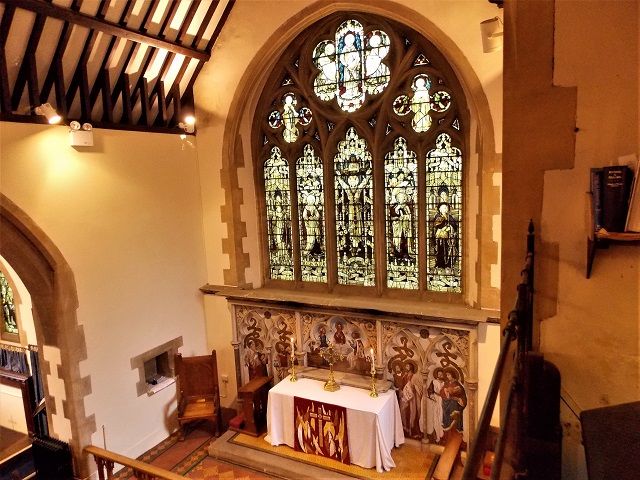 II
MATERIALS: The church is built of Kentish ragstone with limestone dressings and is roofed with slate.

PLAN: The plan consists of a nave with flanking aisles under their own gables, a chancel, N transept, N and S porches and a S tower.

EXTERIOR: It is a Gothic Revival church built in the style of the late 13th century which was extremely popular for church-building at the time it was erected. The defining features are the Geometrical style windows used extensively throughout the church. All the parts of the building are separately articulated as current ecclesiological taste dictated. The tower is very plain below and has paired, shafted lancets for belfry windows. The design of the tower and its parapet is such that a spire may have been intended to finish it off.

INTERIOR: The walls are plastered and whitened. Between the aisles and nave there are four-bay arcades with octagonal piers, moulded capitals and bases and arches with roll-moulding on the soffits. The chancel arch is double chamfered. Over the nave is a hammerbeam roof with slender timber members and intermediate arch-braced traces. The chancel has a simple close-coupled roof with main trusses with a collar. The aisles have tie-beam roofs with arch braces to a collar. There is a curious treatment at the first pier from the E which consists of two responds of unequal height mounted back-to-back. This type of feature might be expected in a medieval church where it would indicate a change of design between two building phases. Unlikely as it might seem, that is probably what has happened here between the two building campaigns of the 1860s and 1870s and is perhaps an example of a deliberate attempt to introduce a feature which suggests organic development of a kind that might be found in a medieval church.

FIXTURES: Most of the fixtures are original to the Victorian church. The font has an octagonal bowl with nodding ogee arches and stiff-leaf decoration. It has a pyramidal cover with blind tracery panels and which is mounted on a counter-weighted system. The plain stone tub pulpit has a moulded cornice, a band of text and a thick octagonal stem. The reredos has blind tracery stone arches on marble shafts with good painted panels of prophets etc (date and artist unknown). There is a series of fine stalls with open traceried fronts and poppy-head ends. The pews are of pine and have simple shaped ends of the rounded shoulder type and many of them still retain their Victorian numbering. Those to the W of the N and S entrances were cleared away in 2009 to create a circulation space with refreshment facilities etc. Stained glass includes a N chapel E window of 1901 signed by T F Curtis, Ward and Hughes: the E window is by Ward and Hughes, 1896. The best features of the Victorian work are the reredos with rather good paintings of Old Testament prophets etc and the choir stalls which have elegant pierced frontals and rather attenuated poppyhead bench ends.

HISTORY: The church was built to meet the need for increased Anglican church accommodation in Sittingbourne in mid-Victorian times. Although planned as a whole, it was built in two main phases as was often the case in the 19th century due to constraints on funding. The first parts built were the nave and aisles in 1867 for which the architect was the London-based Richard Charles Hussey (1806-87). Holy Trinity church was designed by Richard Charles Hussey (1806-87). He was for a time in partnership with Thomas Rickman who is famed for his categorisation of the medieval styles of architecture which is still used today. The Buildings of England CD-ROM lists just over 50 works by him, almost exclusively churches or parsonages. They cover a fairly wide geographical spread from Kent through to the Midlands. Their date range is from 1839 to 1870 so it seems likely that he spent the last 17 years of his life in retirement which is why the second phase of the work at Holy Trinity passed to Joseph Clarke who was extremely busy as a church-builder in Kent. The need to complete the building was driven by further population expansion in the area. In the application for a grant from the Incorporated Church Building Society in 1872 it was noted that `At the time the [1871] Census was taken a great depression in the Brick trade reduced the population of this newly formed parish from 3000 to 2553. It has again nearly reached the former number, and there is every prospect of a further increase in population. The population with but a few exceptions consists of the very poor'. Slight changes seem to have taken place in the design between the two phases. The architect for the second phase was Joseph Clarke (1819 or 20-1888), another London-based man whose practice was very largely concerned with church-building and restoration. His known works date from the middle of the 1840s until the time of his death. He was diocesan surveyor to Canterbury and Rochester and, from 1877, the newly-created diocese of St Albans. These posts helped bring in numerous commissions in these three dioceses but he also gained jobs over a much wider geographical area and examples of his work can be found in most parts of England. He was consultant architect to the Charity Commissioners.

REASONS FOR DESIGNATION DECISION
Holy Trinity church, designed by R.C Hussey and first opened in 1867, is designated at Grade II for the following principal reasons:
* It is a mid-Victorian church Gothic Revival built in a late 13th-century style church, designed two phases under two nationally-known church architects, R C Hussey and Joseph Clarke.
* Most of the fittings are original to the C19 church and include some of good quality, notably the reredos and flanking panels and the choir stalls.

Holy Trinity church is designated at Grade II for the following principal reasons:
* It is a mid-Victorian church Gothic Revival built in a late 13th-century style church, designed two phases under two nationally-known church architects, R C Hussey and Joseph Clarke.
* Most of the fittings are original to the C19 church and include some of good quality, notably the reredos and flanking panels and the choir stalls.