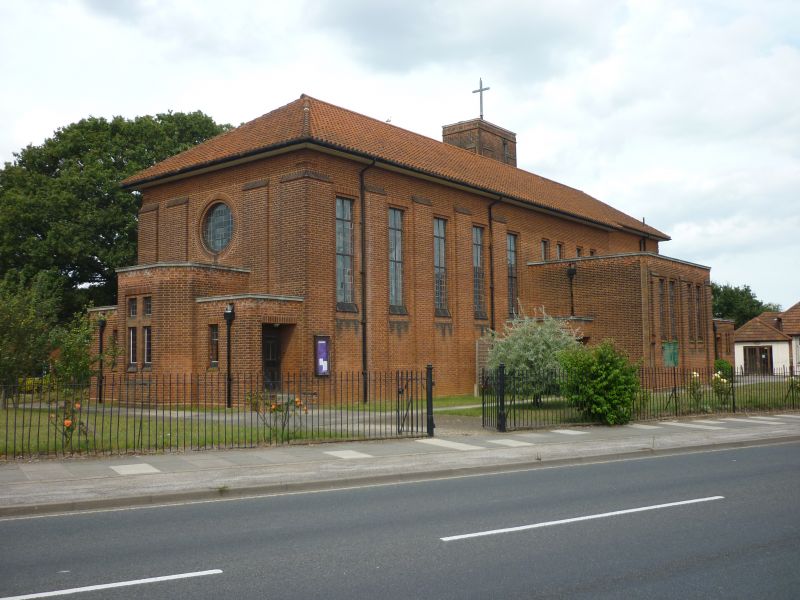 MATERIALS
Red brick laid in a modified Flemish bond under a hipped pantiled roof. The flat-roofed north and south transepts and chancel chapels are of reinforced concrete.

PLAN
It is a long narrow building divided into a nave and chancel, although on the exterior the chancel appears only as a slightly narrower continuation of the nave under the continuous hipped roof. Lower north and south transepts stand immediately west of the chancel arch and there are yet lower chancel chapels abutting the east ends of these, and of slightly narrower width. At the west end is a canted baptistery flanked on either side by entrance bays, all under flat roofs, and there is a north tower.

EXTERIOR
The main west wall is articulated by wide paired brick pilasters finished at the top with swept raking courses, and the outer pilasters are developed into clasping buttresses wrapping round into the flanks of the nave. Between the buttresses at a high level is a circular window fitted with a metal casement and the ground floor has a central projecting canted baptistery lit to the west through paired casements in the form of a two-light transomed window which has the central mullion and transom constructed of brick tiles and of such unusual heaviness that it appears as a Latin cross. It has splayed sills and a soldier course as a lintel. Dentilled cornice. Flanking this and set slightly back are lower entrance bays which have each have a single-light casement to the west and a recessed door to the north and south respectively. Both of these, and all of the projecting elements in the building, have low dentilled parapets and rainwater hoppers

The nave north and south flanks are essentially identical, and consist of five tall high-level single-light casements set in slight rebates and separated by flat brick pilasters. The eastern window is set over entrance bays into the transepts, these bays being identical to those of the west front. Then follow the taller four-bay rectangular north and south transepts which have blank east and west walls and main elevations lit through four single-light casements identical, but slightly smaller, to those of the nave. These are organised into two pairs framed by three flat pilasters. Over the transepts are four clerestory lights, also rebated and also organised as two pairs, but without separating pilasters, and above these is the considerable overhang of the hipped roof.

The chancel north and south walls have two and three similar casements respectively, the one or two western ones being slightly shorter than the eastern window because of the placement of the chancel north chapel and the south vestry below them in the angle between the chancel and the transepts. The vestry has a panelled doorway in the south wall with a tripartite casement to its left and a single-light casement to the right, all with the same details as before. The east end of the vestry is pierced by three small single-light lancets. The north chapel is much smaller, with only two casements facing north and with a lower extension abutting its east wall serving the heating chamber beneath the organ. The chancel east end is distinguished by heavy clasping buttresses between which in the blank wall is a recessed and projecting brick Celtic cross.

The only asymmetrical element of the whole composition is associated with the rectangular brick bell tower to the north and the difference in the chancel chapel. The tower rises over the roof line in the angle between the north transept and chancel, taking a bite out of the width of the chancel as it does so. It is articulated by two brick pilasters to each face of the belfry stage, with one louvered belfry window in each of the longer north and south sides. Over the parapet rises a mobile telephone mast in the form of a Latin cross. The lower stages of the north side is blank apart from two soldier brick courses.

INTERIOR
The interior walls are left as exposed red brick with minimal detailing in Clipsham stone confined to the transept arch piers and the chancel arch capitals. The nave is entered through a square-headed opening into the canted west baptistery under the circular west window, which is framed on the inside by a stepped semi-circular arch. The nave north and south walls have five recessed brick arches to each side directly under the five nave windows with good simple detailing to the rebates. Over the dentil cornice is a flat nave roof with canted ashlar boarding, all in the form of repeating rectangular timber panels running up to the chancel west wall. The transepts each have two semi-circular brick arches supported on a single square-section Clipsham stone pier with canted corners, so that it appears octagonal, and similar demi-piers act as responds. The four clerestory windows above these arches have double rebates. The chancel arch is semi-circular, is rebated and has notched brickwork in the arch over moulded Clipsham stone block capitals. Deal woodblock floors are fitted throughout the church.

The chancel has on the north side a tall rebated semi-circular arch opening into the organ chamber and two windows to its east, while the south chancel has three windows, all under a panelled canted ceiling with five facets in a more elaborate pattern to that of the nave. There are three chancel steps and a hanging dossal on the east wall over the high altar, and a suspended Celtic cross under the chancel arch.

FITTINGS
The Clipsham stone font in the baptistery is by Cautley, and has a wide octagonal plinth-step and an octagonal drum font with billet and reeded mouldings, upon which is a walnut font cover. This has two classical arched openings to each facet and a tented top with a Latin cross as a finial. The nave benches were relocated here from Ely Cathedral and have panelled backs and scrolled stall ends, with lower pierced trefoils.

The remaining fittings, apart from those of the south transept, are all by Cautley, in walnut veneer (probably over pine), and include the nave altar in the crossing and the high altar against the chancel east wall. This has three panels to the frontal each with a mirror veneer within an inlaid frame. There are two pulpits at the entrance to the chancel, that to the north with a reader's desk below it. Of square section with hollowed corners, there are further veneered panels and a reeded frieze, all standing on a rendered brick plinth. The reader's desk has a similar reeded frieze and flat veneered panels between projecting square pilasters. In the chancel there are very fine choir stalls with inlaid piers and inlaid veneer panels, and moulded top and bottom rails, in addition to the reeded frieze towards the west. The altar rails have panelled inlaid veneer piers, moulded top and bottom rails and plain turned balusters. The organ of 1939 by Binns, Fitton & Haley of Leeds has one four-panelled door to the right and left of the central console, which is behind a folding four-part glazed screen. Above this is the projecting pipe frame with twenty-nine pipes. The single bell of 1609 by John Draper was moved here from All Saints, Knettishall, Suffolk.

HISTORY
The industrial port of Ipswich underwent a considerable expansion from the medieval centre in the C19 and C20, with a population which rose from 66,000 in 1901 to 85,000 in 1931 and to accommodate the residents the council embarked on a large scheme of council house construction from the time of the 1919 and 1921 Housing Acts. One such estate, the Gainsborough Estate, was laid out on a green-field site to the south-east of the centre in 1930-35, and to serve the community two new churches were proposed, the Anglican All Hallows and the Catholic St. James' church. The St. Edmundsbury and Ipswich Diocesan surveyor from 1914 to 1947 was Henry Munro Cautley (1875-1959), a committed medievalist who is best known for his 'Suffolk Churches and their treasures' (1937), and who was personally responsible for three churches in the town (St. Andrew's chapel, St. Augustine of Hippo and All Hallows). Work on All Hallows began in 1938 and the church was opened in May 1939. The organ, by Binns, Fitton and Haley, was added in 1939, and the south transept received its fittings in 1951, the war having prevented the completion of the last details.

REASONS FOR DESIGNATION
The Church of All Hallows, Landseer Road, Ipswich, built in 1938-9 is designated at Grade II for the following principal reasons:

* ARCHITECTURE: it displays a sophisticated Modernist design, combining traditional and comtemporary motifs in an unusual manner.
* DESIGNER: it was designed by Henry Munro Cautley, an influential church architect and Diocesan Surveyor from 1914-1947.
* FITTINGS: the spatial quality of the interior is boosted by the retention of a complete suite of fittings, designed in a distinctive 1930's idiom by Cauntely, and the presence of benches bought here from Ely Cathedral.
* INTACTNESS: the church is little altered, internally and externally, and retains its interior character.

The Church of All Hallows, Landseer Road, Ipswich, Suffolk is recommended for designation at Grade II for the following principal reasons:
* ARCHITECTURE: it displays a sophisticated Modernist design, combining traditional and comtemporary motifs in an unusual manner.
* DESIGNER: it was designed by Henry Munro Cautley, an influential church architect and Diocesan Surveyor from 1914-1947.
* FITTINGS: the spatial quality of the interior is boosted by the retention of a complete suite of fittings, designed in a distinctive 1930's idiom by Cauntely, and the presence of benches bought here from Ely Cathedral.
* INTACTNESS: the church is little altered, internally and externally, and retains its interior character.