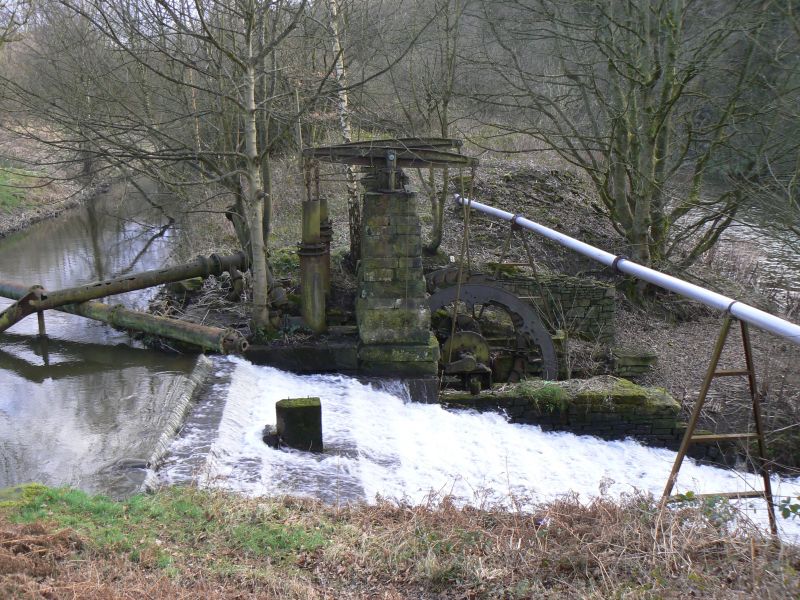 PLAN: The structure is rectangular in plan.

EXTERIOR: Two tapering sandstone stone pillars approximately 2m tall rise one from each side of a stone-lined wheelpit and support the cast iron rocker mechanism for the pumping rods which were attached and driven by the waterwheel. The wheel has eccentric cams on the outer hub plates which powered the pump rods. The wheel, its axle and driving gear remain within the wheelpit although timber water buckets and other timberwork has eroded. The wheel was a low breast wheel with water falling into the buckets at mid-point on its circumference. Stop-plank beam slots are visible on the goit-side of the wheelpit walls to hold back the water when the pump was not used. The pumps, pistons and pipe work all remain in situ.

HISTORY: Mount Sion Mill is thought to have been built in the first half of the C19 and is depicted on the Ordnance Survey map of 1850 as `Mount Sion Print Works'. Reservoirs lie to the east of the mill as does a weir and goit. Water in the goit was used to turn a waterwheel which powered the beam engine to pump water into the reservoirs at a time of water shortage. Spillways or overflows were constructed immediately adjacent to the pump to take excess water from the goit down into the river. On post-1850 maps the mill is depicted as a bleach works. During World War I the works was used to manufacture guncotton. In 1918 the bleach works burnt down. At an unspecified date the site became Mount Sion Papermill and it remains in use as a pulp processing plant.

REASONS FOR DECISION: The early-mid C19 Mount Sion beam pump, Radcliffe, is designated at Grade II for the following principal reasons:
* Rarity: the Mount Sion beam pump survives in a relatively good condition, still retains most of its component parts and is an unusual survival of its type
* Intactness: the pump's level of survival means that it is still clearly possible to understand how it functioned
* Interest: the surviving adjacent goit and reservoirs illustrate clearly how the water management system at the former mill was powered and supplied by the beam pump.